This is the fourth piece of a multi-part series on Venice, written during the author’s month-long residency and personal hiatus in the city. Read part one here, part two here, and part three here. 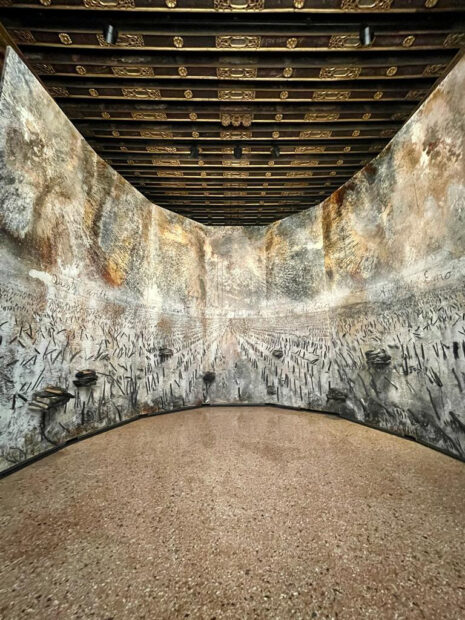 I sat down on the cold marble floor; I had to, in order to take in the entire artwork. The piece — a combination of painting, collage, and installation — is more than 70 feet in length and an overwhelming 23 feet high, meaning that looking up to see its expanse requires craning one’s neck far enough to lose footing and tip backwards. Physical (dis)comfort aside, the work was a punch to the gut, forcing me to sit to simply catch my breath, making me feel grounded.

I was in Venice visiting the Doge’s Palace, which is situated between St. Mark’s Basilica and the original point of entry to the city itself. Historically, the church and the state occupied these prominent positions of power, which is compounded by the fact that both have buildings at the head of what is considered the only plaza in Venice. Originally, travelers arriving by boat would be greeted by the two tall towers of the city, one topped with a winged lion representing St. Mark, and the other topped with the Byzantine Saint Todaro, the city’s first protector. There was no doubt in the mind of any traveler where power was centered. 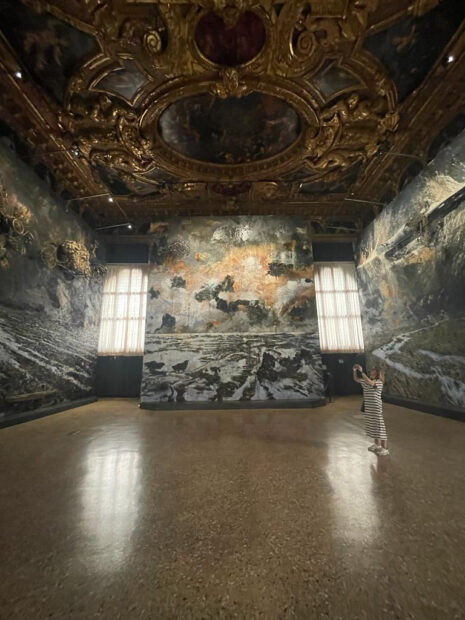 Up to this point in my trip, I had prioritized the Biennale, which is mostly centered in two sites, the Giardini and the Arsenalle — the former navy base. During the Biennial, countries without spaces and artists who have sponsorships open satellite projects scattered throughout the city. In this edition, the Doge’s Palace was also an exhibition site, focusing particularly on the relationship between contemporary art and museums. Set in the Sala dello Scruttinio, where 33 paintings by masters like Titian and Tintoretto fill the walls and ceilings, depicting the history of Venice and its foundational values, the Sala and its preceding room were turned over to Anselm Kiefer for a site-specific installation. The experience of the installation is hard to describe. It is both overwhelming and emotional. It is so heavily textured and installed in a scale so large it almost becomes a permanent part of the room.

By all accounts, the Kiefer project was a must-see. I’ve experienced many contemporary projects in old palaces or convents, and usually they are in delegated spaces situated away from historical works. In this experience, however, there was no bypassing the historical part of the tour — there were no shortcuts and no separation from the rest of the palace and the contemporary piece itself. It was necessary to engage with the palace, to see the stories of the city and its many Doges through the allegorical paintings filling each of the state rooms. Being overwhelmed by facts, history, and the many steps it took to reach the installation was all part of the experience of the piece. 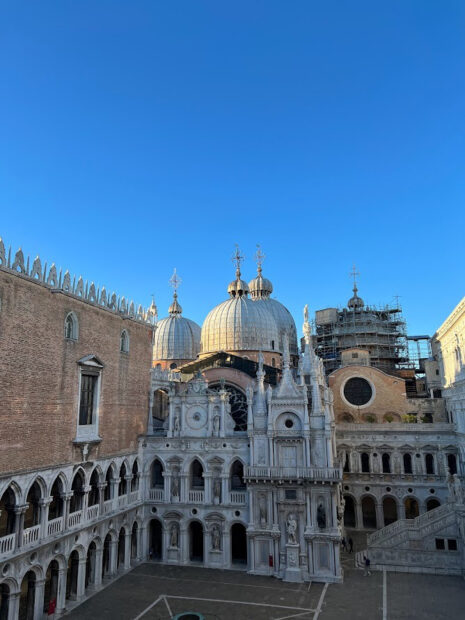 The interior courtyard of the Doges Palace, Venice. Photo by Mike Counahan.

The Doge’s Palace is the definition of impressive. The facade’s intricate pink and white patterns of marble brick act as a subtle backdrop to the ornate architectural elements of embellished and pointed arches, pilasters inset with figurative sculptures in allegorical stories of the city’s founding. Gargoyles and buttresses look woven into the marble like fabric, and cornices are so intricately carved that they appear to be sewn in like delicate beadwork. The interior is no less ornate. The architecture has both lightness and weight, a balance of flexibility and compression together with delicate detailing that makes it dazzlingly breathtaking. 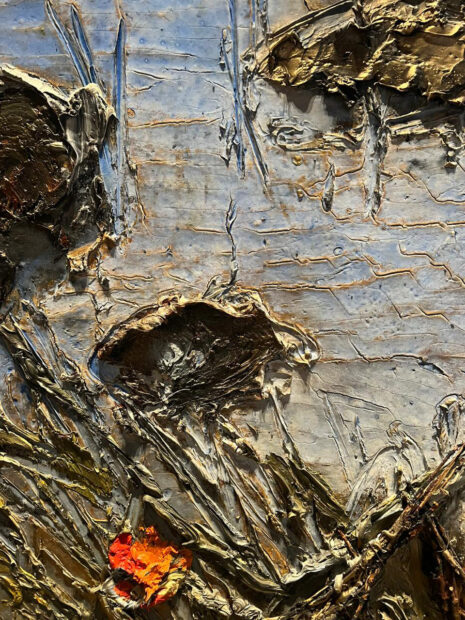 Visitors are led along a singular route that winds through state rooms, senate rooms, and chambers for secret councils, all adorned with paintings and framed with trompe l’oeil wood paneling and elaborate gold leafing. The tour leads to armory rooms where ancient weapons are displayed behind thick plexiglass. Room after room illustrates the history of the city, and its 120 Doges between 726 and 1797. Then, rounding a corner into a small, transitionary room are various mixed media canvas panels. They make up one large painting of wooden posts in what looks to be frigidly cold water, with stacks of burned papers suspended at random heights and locations on top of the canvas itself. The ambient skies are as dramatic as a stormy day in the city. Though immediately impactful, this painting is only the antechamber — a preparation, if you will — to Kiefer’s larger installation.

The piece, titled These Writings, When Burned, Will Finally Cast a Little Light, a quote from Italian philosopher Andrea Emi, is completely unexpected. It is well-situated within the space it occupies, as well as what it lends to one’s experience of the Palace — an amalgamation of the Classics and Kiefer’s language of destruction and nihilism — that it forces emotion and reeks of pain. Panel after panel towers over the walls, mounted on a structure of scaffolding that obscures the building’s masterpieces. The oil paint is applied so thick you can still smell it in the room, and is mixed with objects like bicycles, shopping carts filled with burned wood, sticks, and piles of fabric and paper, all of which look from another era. 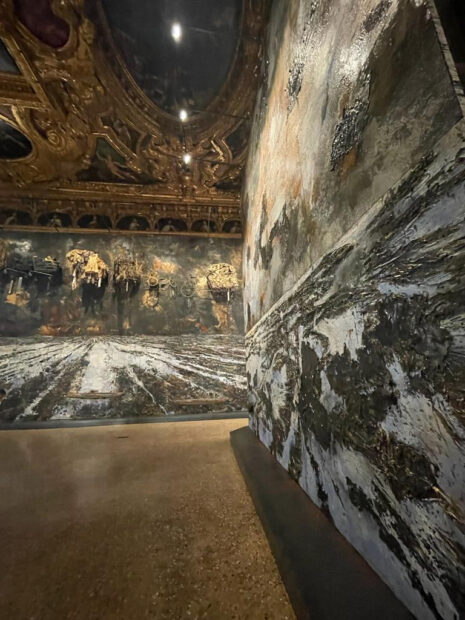 One panel, situated between two tall windows, depicts the empty coffin of Saint Mark — the saint that gave Venice its legitimacy — suspended above burned trees and hovering above water, in a swirling mass of textured grays, blues, and yellows that mimic the palette and architecture of the room itself. Applying many of the same symbols from the classical allegories painted throughout the palace, Kiefer uses the motifs of the past to illustrate a very broken future.

In one panel, the golden, winged lion of Venice is emblazoned on a red flag, flying in contrast to the deep black backdrop of a charred sky. Below is a Venice aflame — cracking, peeling, and collapsing into the water, which receives the scorched city in a reflective wash of golds and reds that cascade across the painting itself. The thick application of paint and collaged elements underneath create a three-dimensional surface on which each wave, each color, remarkably captures and reflects the dim light entering the room. In the bottom register of the painting, the standard uniforms of laborers are collaged on the canvas, either floating in the water or emerging from it, a haunting and ghostly representation of the cycle of human destructivism. All at once, the work lays bare a cycle that is a necessary evil, one of pain, destruction, and rebirth. 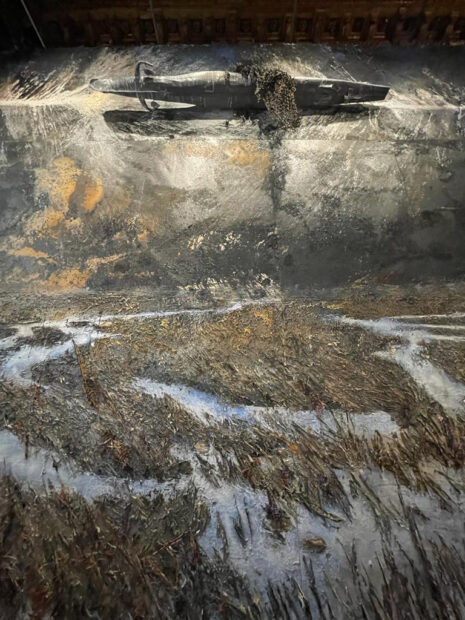 Kiefer’s addition in the two rooms of the Doge’s Palace is the first since the original decoration was repainted after in a fire in 1577. Artists were commissioned by the State to depict the glory of Venice, a retelling of the history of the city emblazoned onto the walls of the room that erased what existed before. In Kiefer’s work, the story of Venice lies at the heart of the installation, and in the same way the fire destroyed the original works in the room, his piece will also be destroyed in its own deinstallation. Kiefer manipulates the allegories used to tell the stories of the foundation of Venice to show a different story, one of human intervention, destruction, and the ways in which we bring about our own implosion — over and over again.

I sat on that cold, marble floor for the better part of an hour, appreciating every second with each panel, observing how the light shifted and danced at different angles, captured by both the collaged elements and the colors of Kiefer’s palette. It was hard not to consider the role humanity has played in jeopardizing Venice’s future, the raging wildfires in Europe in 2021, the extreme summer heat in Texas, the unconscionable invasion in Ukraine. In that room, on that floor, and with that artwork, the narrative was not just about a bigger picture of the cycles of natural destruction, but the many ways in which our own narcissism continues to generate these disasters. 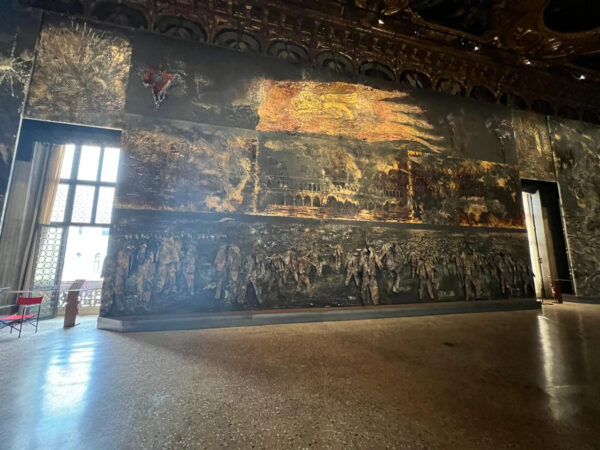 When I finally stood up, I realized there was more to the visitor tour, and half the Palace remained to be seen. From the grand room of the Kiefer, attendees were directed to the Bridge of Sighs, known for being prisoners’ final view of Venice before they were escorted into the dank, winding passageways leading to the jail cells far below the palace itself. From the perspective of a curator, the route could not have been more performative, and the cold tunnels, coupled with the sense of despair for anyone imprisoned there, added to the feeling of dread. I walked out emotionally drained; I had just witnessed history collide with the future in an uncontrollable present. 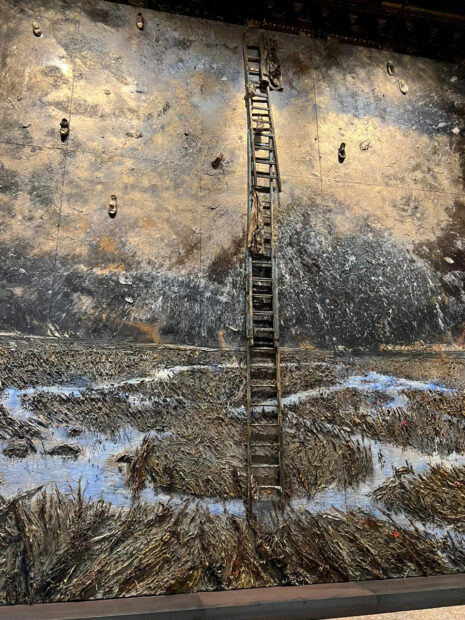 It is fitting that a piece rendered for a site-specific installation within the historical seat of power in one of the greatest cities in the world will subsequently be destroyed by its own deinstallation. It is a new version of the allegory of Venice itself — or perhaps a continuation — and part of the story of our own existence.

Venice: A Metaphor for Mending