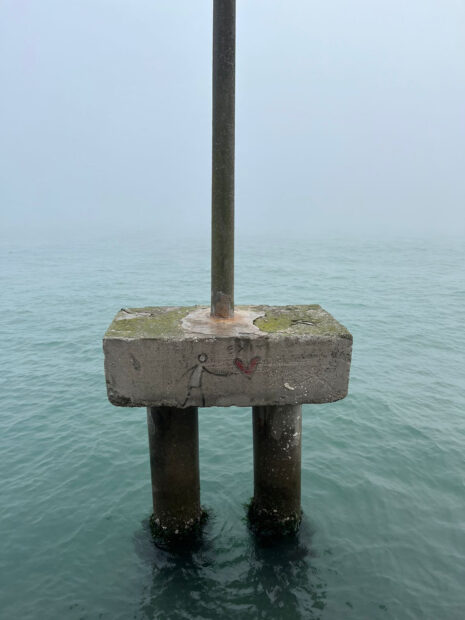 Graffiti and background fog over Giudecca, photo by Mike Counahan.

Overnight, a thick, dense fog had settled over the city. The mist came from both above and below, blanketing everything with moisture and clouding visibility. The only way to spot the horizon was by the movement of the water — the light glinting off the curve of the current, catching the tiniest rays of purples and pinks. Propelled by the wind, thin puffs of vapor floated along the cobblestones, hovering slightly above the ground like the lightest of cotton.

I can’t remember the last time I had seen such dense fog. The main island was blanketed, and it felt like being in a cloud, totally disconnected from the rest of the world.

It had been three weeks since I landed in Venice, and it was starting to feel like home, an odd thing since I’ve spent little time in Western Europe. My writing has mostly been consumed by borders, my own genealogy, and the colorism that exists within my own family. Interrogating these topics has taken me to the former Soviet Bloc more than once, caused me to be rejected from the border Poland and the European Union, and has brought me back to areas up and down the Tex/Mex border innumerable times. 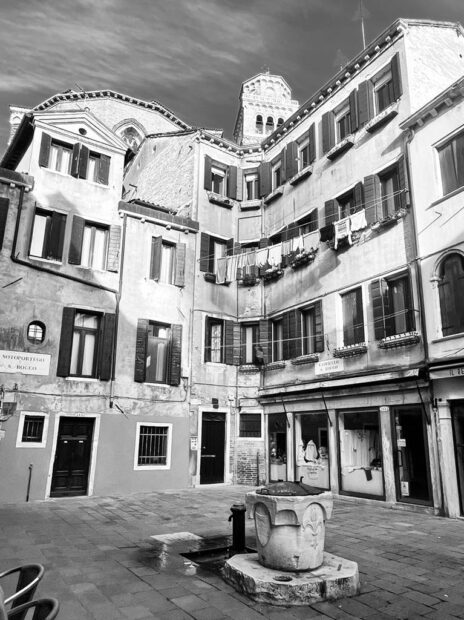 But changing context is similarly important for current and future research, and Venice instigated a change of climate that grounded me back into my reality in unexpected ways. Oftentimes one has to completely leave in order to fully come back.

Here, there is a language of water. The city is made up of hundreds of canals between tiny islands connected to each other by small bridges. These island masses sit in a small lagoon in the Adriatic, connected to the mainland by a massive highway on one side, and blocked from open ocean by even narrower barrier islands on the other. The presence of water is pervasive and penetrates everything, from the sound of waves crashing against the sidewalks, to crumbling plaster and the cracks of humidity slowly peeling painted walls, culminating in a constant cycle of decay and repair. 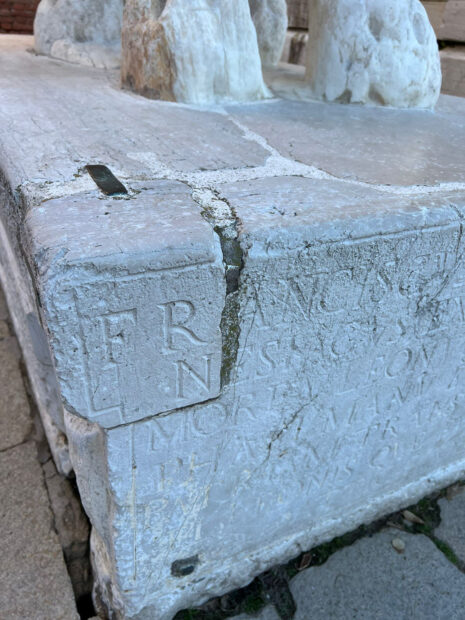 A crack in the base of a monument, photo by Mike Counahan.

The language of water and the slow destruction that comes with it is familiar to me for different reasons. In Mexico City, where I live part-time, the absence of water is just as important. The city was once an island in the middle of a lake that was drained slowly throughout the 20th century for a variety of reasons. Mexico City is a sinking, crumbling mess that battles earthquakes and unstable ground, is constantly being repaired and reinforced, and whose rains would flood the megalopolis back to an island in the middle of the lake, if allowed. The absence of water is the reason the city is “on the verge,” so to speak. In Venice, the presence of water is just as complex, and the rising sea level is a constant threat that will one day wash the island into the ocean.

Whatever pact the original settlers of Venice made with our planet’s metaphorical powers that be seem to have sufficed for thousands of years. A balance existed between land and water, and the past city seemed to thrive from it. Venice was founded by refugees fleeing battles between Byzantium in the east and the Franks in the Italian mainland, and ultimately became a tiny independent republic between the two sprawling empires. Since its inception, however, the city faced engineering challenges. The settlement was on a series of mosquito-infested islands of bogs and mud, and foundations required dredging and stabilizing. But with great ingenuity comes great power, and Venice displayed both, ultimately coming into its own economic stability and grandiosity with the help of salt and trading. The city grew in and formed an identity as unique as its own urban structure. 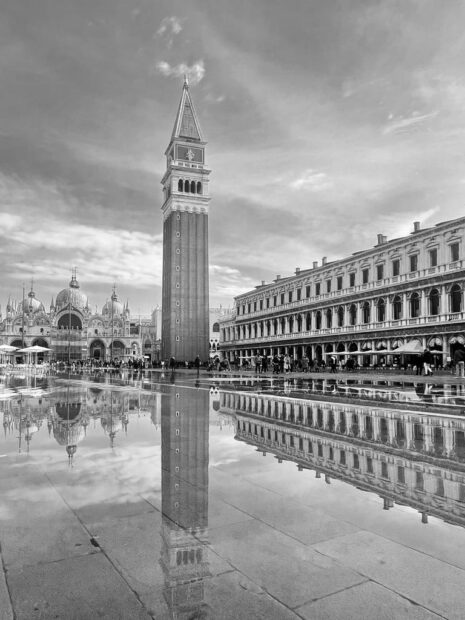 But, as we are all aware, climates change, and I witnessed the weather shift overnight. The bright, sunny, humid Venice I had arrived in dissolved into a cold, dark, wet city.

Here, the elements are a constant factor, more so than any other place I have experienced. Cars and bicycles are prohibited within the city itself, which means the main form of public transportation is the system of vaporettos, or boats, that move the population through the canals and lagoons. The only other option is walking, meaning it is easy to trek miles a day, up and down the stairs of the many bridges connecting the islands, through winding, labyrinthian streets and across ancient cobblestones. A sense of orientation is difficult to grasp when inside the city center since the narrow streets don’t lend themselves to direct sunlight, and oftentimes what looks like a pedestrian passageway leads to the dead end of a brick wall, or simply drops off into water.

This is all to say your feet are always a little damp and a little cold, which, in this new weather, penetrates all the way down to the bones. 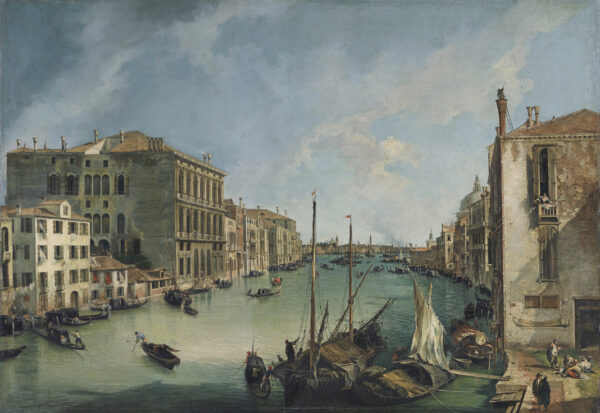 I walk around the city trying to imagine what it would have looked like at the height of its power. It’s not a hard image to construct, and indeed, the striking paintings by Venetian master Canaletto can still apply. The artist documented views of Venice in the 18th century, painting the grand canal in all its stunning glory, illustrating the maritime grandiosity of the boats floating through the city’s passageways. Remarkably, many of these views still look the same. The opulence of the city remains in its weight — literally, the weight of the marble churches scattered across the islands seems far heavier than what the ground can sustain. Indeed, the attempt to sustain Venice has left visible traces of time all over the city, like birthmarks, or scars. Here, mending is a constant job. 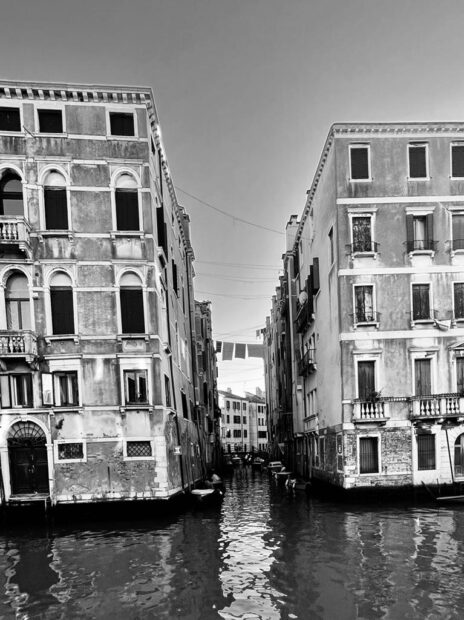 Pilasters inserted into brick walls clearly hold no weight or serve any architectural function. Arches seemingly rise and fall from the ground, potentially once an entryway into a basement, but long since covered with brick and stone. Rows of different colors of brick collide and wedge into each other where repairs have been made over the years, like bandaids wrapping constant sinkage of foundations. Ancient buildings are covered with scaffolding — facade restorations in progress — while the structural integrities of the buildings themselves are compromised, as they’re too heavy for the ground. Water damage is not a threat, but a way of life.

I witnessed a storm that flooded much of the city. Anywhere else and it would have just been normal rainfall, but here it was enough to activate the MOSE system of barrier walls built into strategic parts of the ocean to help mitigate rising sea levels. The winds off the water blew angrily, tripping up my feet and nearly sending me into a wall, and the vaporetto I was on tipped dangerously from side to side in the angry current. Even under my many layers of clothes, there was no reprieve from the rain, the wind, and the cold. More surprisingly, however, was that even as the storm raged around them, tourists still attempted to stage their selfies. I watched as the elements furled their hair and dampened their faces, while they continued to brave city in an absurd attempt for an Instagrammable moment. 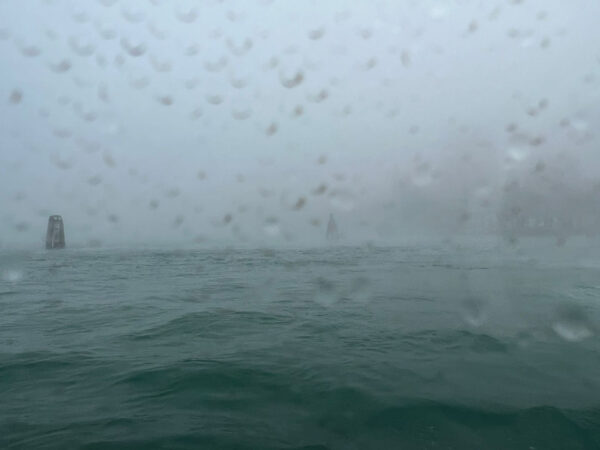 Water and fog from the window of a vaporetto, photo by Mike Counahan.

It goes without saying that Venice has been the backdrop to many staged scenes in both contemporary society and throughout history, and while Canaletto documented the picturesque Venice, he also painted the stonemasons, industrial engineering of the city, and the annual floods — a potential warning to future generations, had we actually paid attention.

While water inundated the island, and while triumphs of engineering were activated to keep us above water, the architectural feat that is Venice itself and the superficial advent of our present-day social media collided. The dark skies, roaring winds, and waves crashing into the sidewalks seemed like a premonition to the environmental threats we have actually created, and I wondered if any of these social media selfie-takers actually cared. 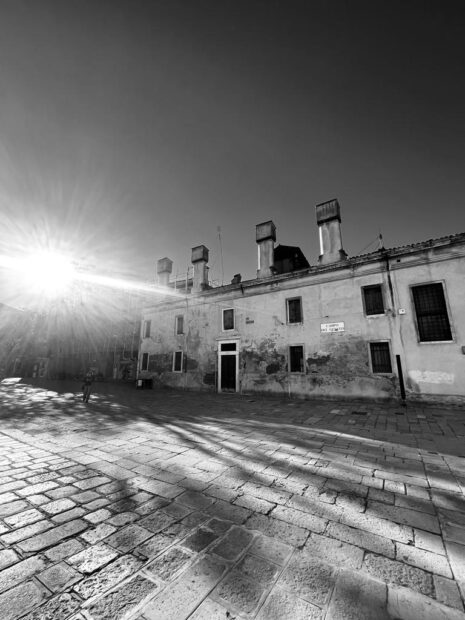 Building in Venice with molding walls, photo by Pilar Goutas.

This city is truly spectacular, and with the superficial priorities of our current generations, the fact that it continues to exist is remarkable.

Thank you to Maripili and Mike for the images and for sharing Venice with me. Thank you to Luca for explaining the MOSE system and braving the weather to keep me dry. Thank you to the team at Venice Art Factory for all the ways you’ve supported us. Another thank you to Mike for bringing the mescal, and to Brandon for helping me shape this messy text into something readable.