Sound Ideas: Tarek Atoui’s “The Whisperers” at The Contemporary Austin 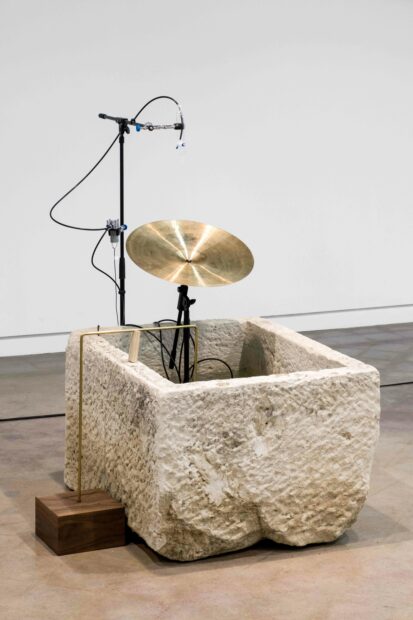 Tarek Atoui has transformed both floors of The Contemporary Austin into something of a sonic temple with his elegantly automated, occasionally activated, network of objects — “tools for listening’’ — that transmit, distort, and collect sounds in subtle yet immersive ways.

The winner of the 2022 Suzanne Deal Booth / FLAG Art Foundation Prize, Atoui is a collaborator’s collaborator, mining various musicians and populations from around the world in order to make some noise. From ancient instruments to everyday objects, the Beirut-born, Paris-based artist and composer uses sound as a medium, exploring the ways in which it travels through material, motion, and sensory perception.

The ground floor of the Jones Center features Atoui’s most recent project, The Whisperers, which prompted a first for the artist: workshopping with five-year olds. Rather than shift his practice to online, at a time when in-person was out of the question, Atoui instead looked to his son’s kindergarten class during the pandemic. Just off from the ground-floor gallery, an interactive setup pairs musical and non-musical items that pose open-ended questions about performance, amplification, and energy. The modules are all interconnected, allowing visitors (much like those kindergartners) to explore the multi-sensory relationships between them.

Prior to the show’s opening in April, three Austin musicians — Henna Chou, Chris Cogburn, and Parham Daghighi — each took part in a two-week residency at The Contemporary, first personally experimenting with the materials provided by the artist, and then linking up with local community organizations to investigate their potential together. The results shaped what is now the exhibition; ongoing live activations are set to take place throughout its duration.

In a way, The Whisperers looks like a Rube Goldberg machine, with a pre-programmed “brain” telling each module when to drip, ripple, vibrate, or spin. The chain reaction consists of three layers: sounds organically made from the movement of these various devices, electronic compositions and field recordings by Atoui (captured in the ports of Abu Dhabi, Athens, and Singapore), and “additives” such as a turntable that visitors might wish to try themselves.

During my visit, curator Robin K. Williams demonstrates by putting on a Ray Charles record:

“Everything is interrelated, there is no direct input/output. The turntable, for example, goes through this speaker, but it’s routed to other elements as well — if you put on headphones at some of these different modules you will hear similar distortions coming from the turntable.”

Williams points to a brass rod — a sound conductor — descending into a sizable stone container collecting droplets of water as they roll off a cymbal from above. A brass disc located at the bottom of the container, along with a second disc (playing either one of Atoui’s field recordings or electronic pieces), and those collecting droplets all get picked up by an underwater microphone and come out of the speaker. Ray keeps singing.

“The space is a composition, everything is timed — not everything is active at once,” says Williams. “You can’t always see it, you have to touch it to know.” I place my hand in a nearby brass bowl filled with water and catch one of Atoui’s electronic composition’s vibrating. 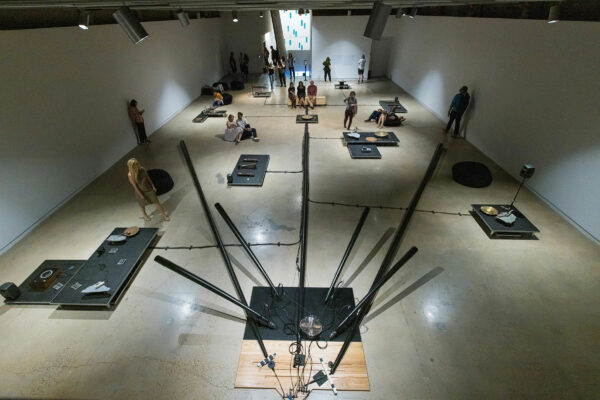 Circular motion is everywhere, from the turntable to a small motorized polishing head meant for jewelry, buffing away at a brass surface. These rotations have an internally resonating effect, subtle and vibe-y — as if you’re standing in the center of a Tibetan singing bowl, in your mind.

The Infinite Ballet Solo is a favorite sound circle in the installation, featuring a 10-meter-long brass chain that’s suspended from the ceiling, slowly dragging around a metal plate low to the floor. The plate sits on top of a wooden box that pipes the sound of this soi-disant ballerina to various modules, creating different ways of experiencing the same mechanical action. Different ways of listening.

The second floor of The Contemporary features The Wave: a distillation of three separate projects from the last 10 years, based on Atoui’s collaborations with deaf and non-deaf students; musicians playing ancient instruments at the Ethnological Museum of Berlin; and agricultural practices that the artist studied in Guangdong, China. It is similar to the first floor’s presentation, with its timed modules and interconnected floor cables, speakers, and microphones. But the second floor is quietly lit, contemplative; more conducive to the orchestration of these electro-acoustic contraptions. There are cozy spots to sit and relax if you wish to take in the entire 35-minute composition (or its seven iterations).

An antler scraping a circle into a slab of slate (inspired by the ancient instruments in the museum in Berlin, I am told) is the predominant sound in the space at one moment. But soon other modules begin to activate: bone on stone, stone on stone, metal, air, and wood. There are instruments Atoui made with a musician in Saint Petersburg, comprised of a wooden base and magnetics that spin and two strings that can be plucked or bowed. (Contact microphones pick up these subtle vibrations when touched.)

A seven-horn salute cuts an imposing presence even when dormant, its long black tubes pointing outward like a warship into the center of the gallery. The Horns of Putin, as it is named, is activated by air and nomadic input (a small chrome fan quietly waits to kick in) for a full, rich sound environment. Physically, it is the most impressive part of the installation — but that’s not to discount the private concert being given by a small vibrating rock rotating in the distance.

The Whisperers and The Wave are both admirably engineered in all their micro (headphones) and macro (horns) possibilities: an aesthetic manifestation of the sounds they each generate, different layers coming together, distorted by different modifications, of different modules — a collaboration in and of itself. And a perfect way to tune in to one’s surroundings. Atoui and his cohorts are full of sound ideas.

Tarek Atoui: The Whisperers runs through August 14 at The Contemporary Austin – Jones Center. An outdoor sound installation by the artist is concurrently on view at the Laguna Gloria campus.

Art Dirt: What Do We Think About Art...