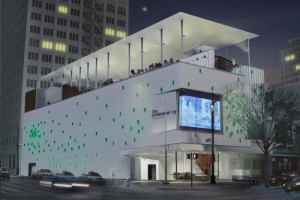 For the past few months, The Contemporary Austin’s Jones Center has been undergoing a major $3 million renovation. The project includes an expansion of the institution’s exhibition space (from 5,100 square feet to over 7,000 square feet), behind the scenes building improvements, and the addition of an open-air canopy to the museum’s rooftop deck, which will be renamed “The Moody Rooftop” in honor of The Moody Foundation’s $1.3 million grant to The Contemporary. 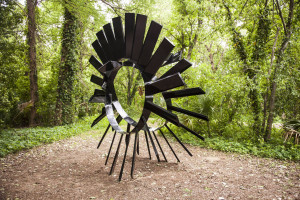 Although the Jones Center galleries will not be open until late this fall, The Contemporary has already announced their reopening plans. The inaugural show for the new galleries will be Habitat, an exhibition of works by Warsaw, Poland-based artist Monika Sosnowska. For the show, Sosnowska plans to fill the museum with large-scale sculptures that “transform the galleries into site-specific backdrops for her works.” Austin museum-goers may already be familiar with Sosnowska’s work: her sculpture The stairs has been on view at Laguna Gloria since 2015.

The museum’s reopening also marks the unveiling of With Liberty and Justice for All (A Work in Progress), an outdoor light sculpture by 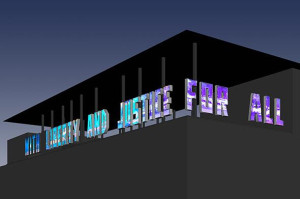 New York-based artist Jim Hodges. The work, composed of seven-foot tall backlit letters, was previously installed at the Aspen Art Museum and has been reconfigured to fit The Contemporary Austin’s rooftop. The work is on long-term loan to The Contemporary and is expected to be on view for a couple of years.

Monika Sosnowska’s Habitat is set to open on Tuesday, November 22, 2016 and will be on view through February 26, 2017. Also, there is a members-only opening celebration for Sosnowska’s exhibition and Hodges’ sculpture scheduled for Friday, December 16, 2016.