Rodney McMillian: ‘Against a Civic Death’ at The Contemporary Austin 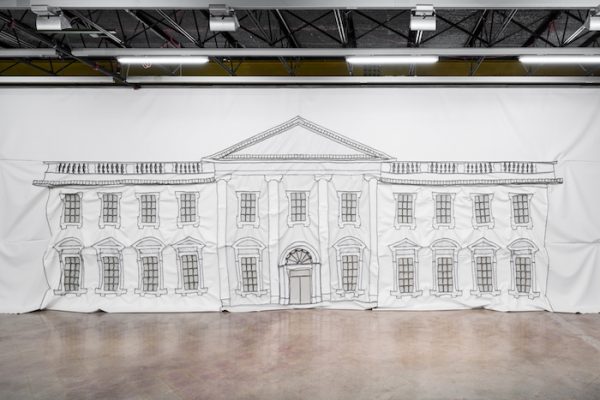 In 2016, The Contemporary Austin established a $100,000 biennial art prize named after Texan arts patron Suzanne Deal Booth. The inaugural winner of the prize and an exhibition at The Contemporary’s Jones Center galleries, Los Angeles-based Rodney McMillian, will also be the last. The award has been renamed the Suzanne Deal Booth/FLAG Art Foundation Prize, a result of Deal Booth joining forces with money manager Glenn Fuhrman to create an even larger prize with a stipend twice as big. Its winner will be announced later this summer. 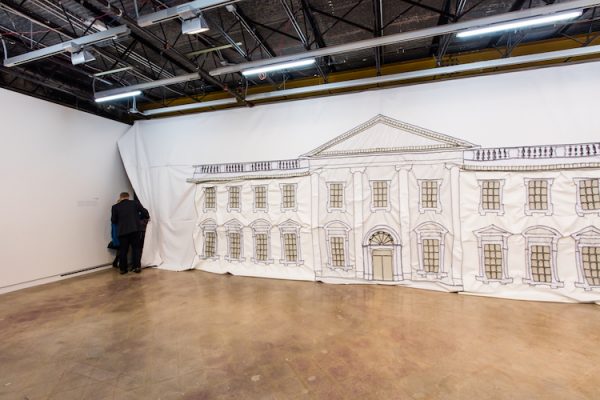 The Contemporary intends the prize to foster the development of an artist at any stage of his or her career, and McMillian seems an astute choice: continually protean and experimental, at mid-career he has not yet been propelled by the market or institutional overexposure to superstardom. For his exhibition Against a Civic Death, he fills two floors and the connecting stairwell at the Jones Center with discrete, often room-sized recent works, several commissioned by the museum. On the ground floor, a huge curtain with a schematic drawing of the north façade of the White House covers the far wall of an otherwise empty gallery. At 42 feet long, The White House Painting (2018), makes for an impressive object, but its rendering of the historic seat of national governance appears rather cartoonish, pieced together quilt-like from six or seven shades of stiff white and off-white vinyl — some glossy, some textured like Naugahyde — and held together with crude black stitching. Hung from the ceiling, it wrinkles and sags from its own weight, further distorting the image and lending it the slightly melancholy air of low-end upholstered furniture or the interior of a 1970s sedan.  Cheap and vulgar, The White House Painting cannot help but evoke the building’s current inhabitant, and its orchestration from several whiter shades of pale might even suggest the traditional and increasingly deplorable racial demographic of power in America. 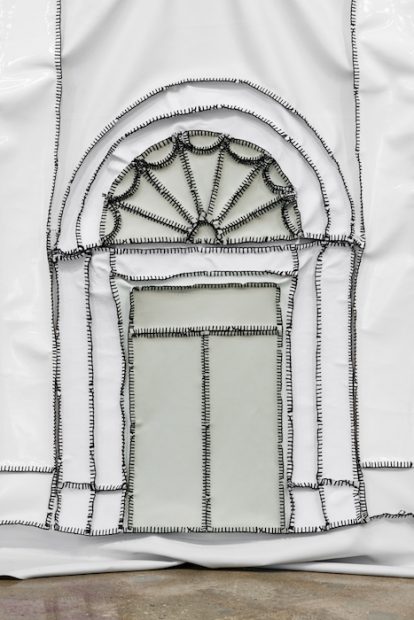 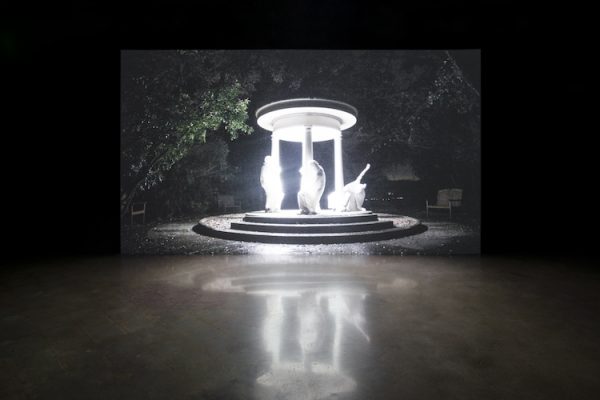 Yet while it serves to introduce the exhibition’s substantive themes of politics and race, The White House Painting remains literally flat, a theatrical simulation of the edifice it represents, like a stage curtain or a backdrop. This association becomes more immediate when we pull aside either of its ends and walk behind to find a video projected on a freestanding wall in the middle of a darkened room. In Untitled (neighbors) (2017), four figures robed and hooded in white wade ashore in the sunlight, move spasmodically through a field, twitch in a scrubby forest, and get caught in the rain at dusk. After nightfall, they sit around a four-columned gazebo that faintly recalls the neoclassical colonnades of the White House. They circle it, approach it, and hump its columns, eventually exeunting severally to reconvene at a bright light, around which they writhe to the sound of gasps and heavy breathing. Tracing a day in the life of a quartet of ghosts, Untitled (neighbors) documents an ambivalent haunting. The specters seem as much victims of their bonds to a location as they do perpetrators of fear. But the figures also sometimes resemble Klansmen — similarly white, threatening, and averse to scrutiny — and their antics at the gazebo embody an erotics of longing for the bygone values symbolized by antiquated architecture, their dance around the light a hideous rite around a bonfire. It is assuredly no accident that McMillian filmed this work at Laguna Gloria, The Contemporary’s lakeside estate, which sits on land once owned by Stephen F. Austin, the father of Texas who also ensured the establishment of slavery in the territory. This place is certainly haunted, but by whom and for what purpose stay open questions.

Only upon exiting the first-floor galleries do we notice a small painting, 25₵ (2012), a trompe-l’oeil depiction of a quarter standing on edge against a black ground. In the context of the White House and the ghost story, this unassuming panel of a commonplace portrait of our first President — father of the country, champion of liberty, slave owner — takes on the weight of history, the precarity and uncertainty of the coin of the realm becomes that of America itself. Which way will it fall? Heads or tails? Win or lose? 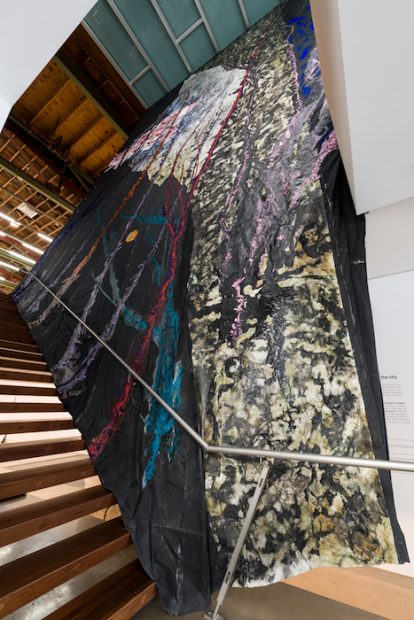 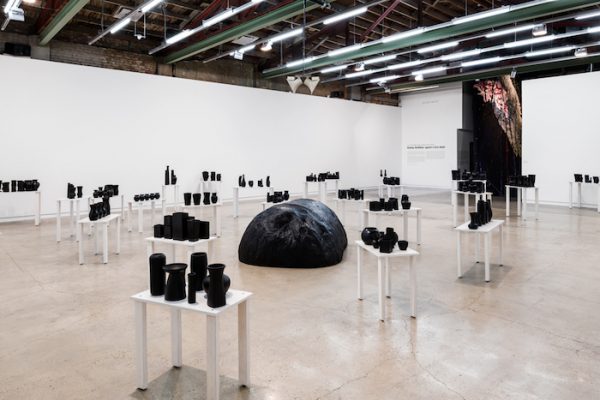 On the Contemporary’s stairs, a vast irregular canvas covered in poured orbs, splats, and ribbons of paint — a kind of cosmic-expressionist fantasia — acts as an idiosyncratic counterpoint to the politically-minded work below and the installation that occupies most of the second floor. Groups of black vases sit on 29 white tables arrayed around the room in pod: frequencies to a manifestationing (2016 to present); a large black form — somewhere between boulder, Hefty bag, and collapsed pup tent — rests on the floor in the middle. Suspended from the ceiling above it, two public-address loudspeakers, of the type you might see outdoors in a used-car lot, blare a 1972 campaign speech by Shirley Chisholm, the first African-American woman elected to Congress and at the time the first black major-party candidate for President. McMillian has mixed Chisholm’s fiery words about the sorry state of race relations and gender equality in the U.S. with musical tracks by both Alice Coltrane and Sonny Sharrock, which sometimes drown out her oratory and sometimes turn it into a cacophonous kind of free jazz of its own. While the speech skews hopeful— “Strange as it may seem,” she concludes, “it may just take a black woman to bring all of us together” — we quickly understand that appallingly little has changed in the intervening decades since her groundbreaking political bid, and her optimism for the future acquires tragic overtones at a moment when a racist demagogue has succeeded our first black President, progress followed by reversal. But if the artist draws clear parallels by employing archival material, pod as a whole resists easy interpretation. The assemblies of vases — diverse in shape, uniform in color — visually make up an audience for the amplified speech, yet the black congregation consists of inanimate objects, mute and unmoved. The lumpy stumbling block on the floor could represent inchoate potential or abject failure. 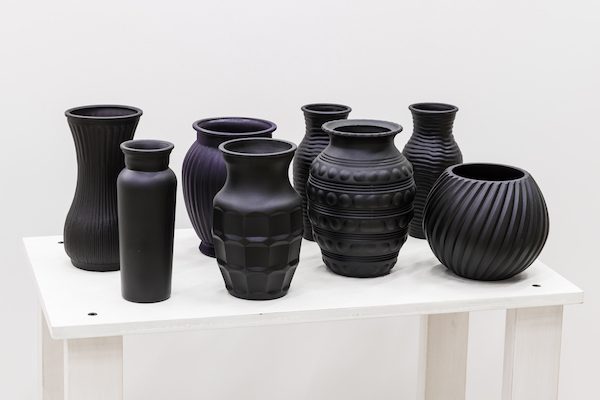 In this time of sharp polarization, an enigmatic work that equivocates about the possibility of the political feels almost revelatory. A kind of horrified paralysis grips us and we are the empty vessels waiting to be filled with the once and future hope that Chisholm so eloquently expresses. McMillian’s exhibition takes its title, Against a Civic Death, seriously; it incites political thought, a consideration of current and historical events, even if its calls for action seem oblique and undefined. McMillian’s elegiac works remind us that America’s current situation stems directly from unresolved original sins that go back generations, even to the country’s founding. They have been with us the whole time.

Through August 26 at The Contemporary Austin, Jones Center on Congress Avenue.