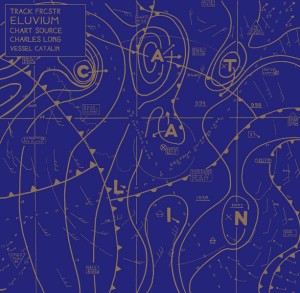 Entering Charles Long’s CATALIN, at The Contemporary Austin’s Jones Center, an orchestral sonar lures you past the front desk towards a record player and a large mural like ocean currents with shipping lanes. The same image on the album cover of the playing record: ah-ha! The music is somehow derived/inspired from the data in the mural! This little “ah-ha!” takes place repeatedly as one discovers that each facet of the exhibition comments on “dark ecology,” or commercialized consumerism’s effects on the planet.

The show centers on the dissolution of the polar icecap, specifically melting icebergs, and targets a few major causes: rampant and frivolous consumerism, air conditioning, and foam/plastic production with its subsequent trash problem.

Named after a toxic 1930’s era plastic, Catalin , primarily found in jewelry, the exhibit faces dark issues, but offers a modicum of hope: Catalin can be detoxified using fungal mycelium. Long goes into detail on this detoxifying process in the upstairs portion of the exhibit, but on the ground floor CATALIN is used as an acronym: Casually Altering Today’s Atmosphere Living Ironically Now. This mantra is positioned above a series of beakers filled with custom perfumes made from glacier water. 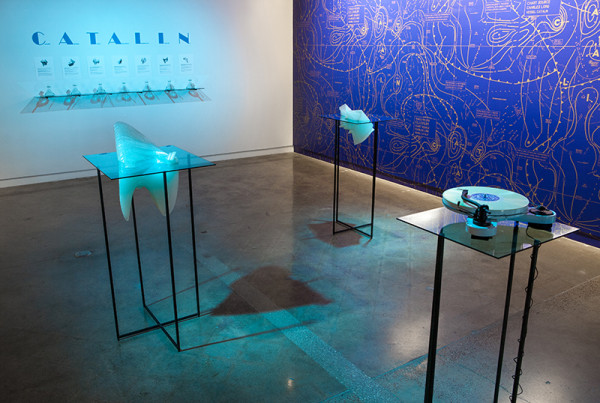 To approach the perfume-smelling station, one weaves through a field of sculptural, 3D-printed iceberg forms embedded in glass-topped pedestals. Called “Databergs,” these digitally-derived sculptures contain perfume, which can be misted out into the surrounding atmosphere. Underlining the frivolous waste of natural resources on fleeting pleasures, the sculptures’ forms are generated from economic data such as the number of iPhones sold, the number of times “ninja” appeared in resumes, or a tracking of the NASDAQ or gold exchange. These pieces —and the subsequent associations—are complex, beautifully crafted, and witty. Realizing the forms are developed from consumer data is satisfying; realizing that the forms are glorified perfume containers is tragic. In the midst of the room’s olfactory and aural stimulation, lists of data, perfume ingredients, eco-acronym, and lengthy wall texts, there is an intellectual and physiological potency to the message that is difficult to shake. 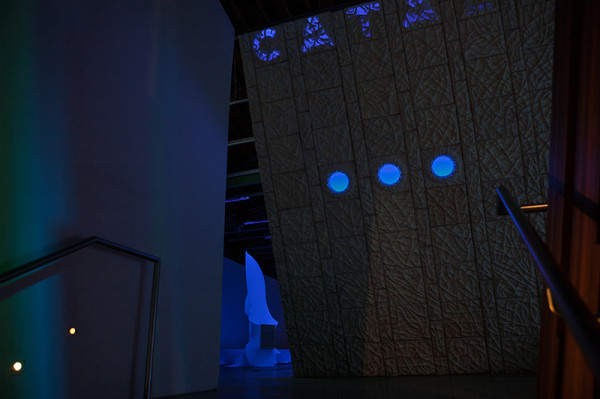 Upstairs, the work turns theatrical and the metaphors are extended to fill a massive room. Long has covered the walls in cast biodegradable foam (made from mushrooms) with a vine-like deco pattern (a reference to the former theatre function of the gallery). Occasionally a series of three circular, glowing blue ports punctuate the foam wall, possibly standing for Long’s oft-used phrase “Object Oriented Ontology.” Referred to as a “crypt” by Long, my first impression of the space was a Temple of Doom spaceship. The focal point, or altar, presents an antiquated device retrofitted to slowly file away a tiny rod of Catalin plastic, ritualistically shaving toxic particles into a bed of soil, where, I am told, mycelium (mushroom spores) will detoxify it.

Surrounding the crypt are seat-high white forms (art couches) and several taller amorphous steel structures partially wrapped in white fabric (recycled, of course, and I am told, extremely expensive).  Air conditioner vents are embedded in the fabric of these ‘melting’ iceberg forms, reference heating/cooling both as a consumer energy waste and global temperature changes. Overhead, a series of videos ranging from abstract to commercial adverts are projected onto rotating mirror sections, which bounce the refracted imagery across the sculptural forms and onto the foam walls, creating an active scene of shadows and morphing light while hammering home the point that consumerism is a glaring, but beautiful, atrocity melting the icecaps.

At this point, I love the show and I get it, but I feel struck in the head. While portions of the exhibit are beautiful, well crafted, and complexly layered, the upstairs is over-populated with large sculptures and theatrically heavy-handed. With my curiosity overstimulated and my eco-conscience battered, it is difficult to enjoy the piece’s grand effect or the small offering of mushroom-renewal hope. I’m simply consuming another large-scale cultural production.

Boris Groys states that any art that does not undercut itself, becoming a ‘zero-sum’ object, runs the risk of becoming propaganda to a cause. Long has chosen an unassailable position: no sane person, marginally attuned to the world, can be against Long’s ecological message, propaganda or not, which means the message itself is not as interesting as how Long says it.

One difficulty in creating ecological awareness art is considering the impact of the message vs. the carbon footprint of its production. Taken to an extreme, the most immediate, ecologically beneficial exhibit would be to close the venue for three months rather than build the art, ship it, and heat/cool the space. Not that a juvenile gesture like that would really help anything, but it highlights Long’s smart, contradictory message: it’s a grand show about how our grand standard of living is drowning the planet.

The most poignant piece in the show, a video installation, retains a sense mystery and darkness, with probably the most ecologically light footprint. On the front wall a ship’s prow looks onto a black sea with the moon’s reflection. The back wall presents the same view from the stern, as if viewers are on a boat. The blackened room offers a reprieve: stripped of the busy lighting effects, massive iceberg sculptures, decorative wall patterning, and educational materials, the video is deceptively lulling, issuing forth a gentle complacency at odds with the apocalyptic vision of a post-ice cap future, as we drift endlessly on dark seas.

I am a Pre-K teacher that saw a Charles Long Exhibition at La Guna Gloria Art Museum with my class. I was sent a “Mushroom log” From the Museum for a project. I have some pictures I took on my phone and emailed them to myself. They won’t open when I send them to someone else. I do have them on Facebook. Is there a way I could share them? Suzanne Carver