Pet Sounds, Charles Long’s installation on the grounds of Laguna Gloria in Austin was originally created in 2012 for Madison Square Park’s Oval Lawn in New York City. Meanwhile, the Contemporary’s entire Jones Center is occupied by Long’s new multisensory experience, CATALIN. Aside from the traditional visual arts, it includes film, music, sound, smell, and touch, but achieves full impact only when the viewer is not alone. Long’s installations are not so much about experiencing them individually, but about watching others experience them: be it the school kids babbling over the colorful, murmuring sculptures at Laguna Gloria or the hip crowd sipping wine at the events at the Jones Center. When Long is at his best, amongst the barrage of sensorial stimulations, we can see ourselves as a part of the crowd—the insatiable consumers of cultural experiences.

Borrowing their title from the 1966 Beach Boys’ album, Pet Sounds are interactive sculptures that vibrate, rattle, and squeak when set off by the viewer’s touch. They are sleek and shiny, vividly colored, amorphous blobs that punctuate or culminate what look like ordinary railings. This juxtaposition of the casual/functional and the weird/formless seems to be the crux of Long’s installation. On one hand, the blobs come off as an amplified cartoonish take on adorable animals, like sea lions or manatees. On the other, they are also quite creepy, resembling beheaded chickens or spilling guts. Likewise, they emit sounds that range from the familiar instruments to the infernal shrieks of Jurassic Park. 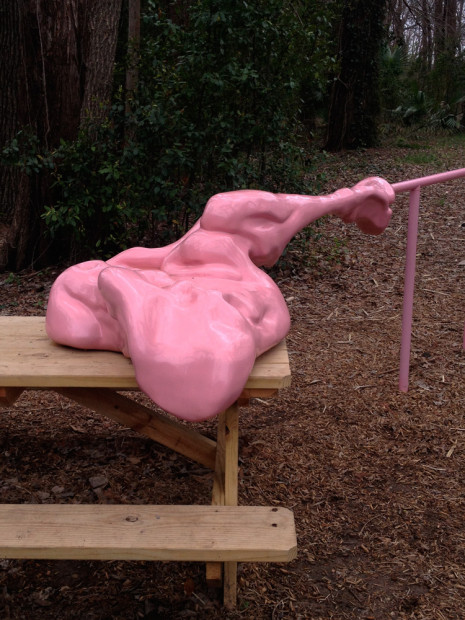 The placement of Long’s sculptures works against their uncanny vacillation. Six forms are installed around the parkland island in the middle of Laguna’s grounds, between Liam Gillick’s Raised Laguna Discussion Platform and Marianne’s Vitale’s Common Crossings. Descending the main stairs from the Driscoll Villa to the riverbank and Gillick’s structure, almost immediately one sights a pink railing that winds up as the pink blob resting on a picnic table. To its right, a complementary pastel-green form is perched amongst the trees. The railings promptly reveal their status as something more than they seem to be: they do not simply outline Laguna’s paths, telling visitors not to step on the grass, but gracefully meander around bushes and trees. This winding curtails the distance between the beginning of each rail and the surprise element that morphs from it. There’s also no play with the expansive, irregular terrain of the estate and its nooks and crannies. The blobs are distributed fairly evenly within the prescribed area: there is an instant gratification but no delayed pleasure. I am curious to see if the installation will function differently once the new vegetation has sprung up. 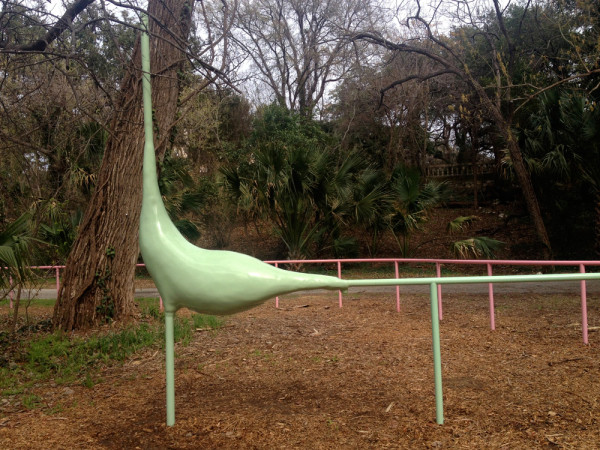 Pet Sounds original installation at the Madison Square Park positioned Long’s blobs more as intruders into a pre-existing gathering spot in a public space, but there’s no doubt that the spanking-new picnic tables and benches at Laguna Gloria were placed there specifically to support Long’s sculptures. At the Madison Square Park the blobs appear to have invaded the ample seating areas already in place—you could have actually hung out with them. This highlights the challenge of restaging outdoors or site-specific projects at a different location, which The Contemporary is bound to face again. In the end, though, Pet Sounds are perfectly harmless and pure fun, adhering to the program of broad popular appeal staked out for the Contemporary’s Laguna Gloria site.

Unlike the transplanted Pet Sounds, CATALIN was designed specifically for the Jones Center and realized with a small army of collaborators and fabricators. The installation spans both floors of the building. 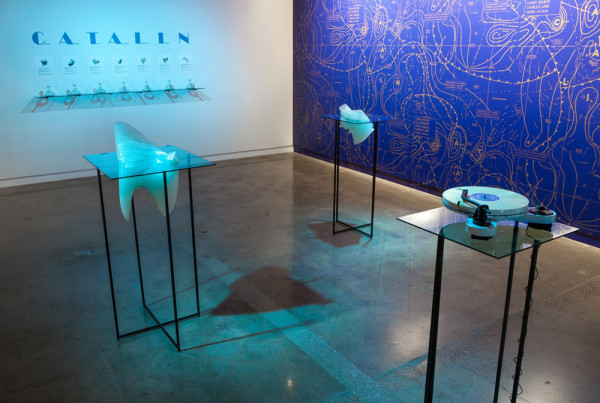 The ground floor is chock full of stuff. The limited-edition record by Eluvium, pressed in a thick yellow vinyl, also on display, provides the ambient sound to the lobby. Seven luminous Databerg sculptures on elegant pedestals are neatly arranged in the space under the main stairs. These iceberg-like forms correspond to seven perfumes produced from various glacial waters, which the viewers are invited to test and smell. The first letters of the perfume’s their individual monikers—“Casually Altering Today’s Atmosphere Living Ironically Now”—spell out the acronym that is the exhibition’s title. The playful atmosphere of this space, afforded by the eclectic accumulation of media and materials, contrasts with the meditative video installation in the back gallery. Titled No Birds, No Bears, No Land, No Ice, three video projections depict an endless, moonlit cruise across a seemingly infinite, dark body of water. 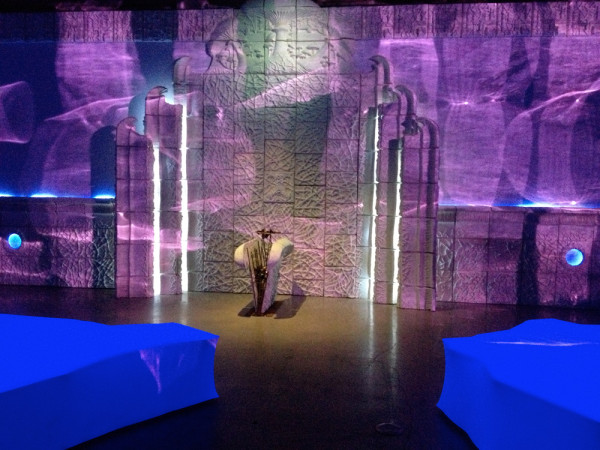 The second floor is different. Illuminated by black lights, permeated by video projections and the soundtrack by Long and John Hiler, the cavernous space is mostly filled by the mock sea-ice formations, made of a biodegradable fabric produced from recycled plastic bottles, stretched over metal-and-plywood armatures. Large enough to seat a handful of individuals, the ice formations have the feel of a 1990s dance club.  In place of a stage with a DJ, there is a kind of a burial shrine to the trademarked plastic the exhibition derives its title from—Catalin, the most popular, though toxic, phenolic resin for the manufacture of inexpensive jewelry and other consumer goods between late1920s and 1950s.

CATALIN—especially the combination of the model-like and product-like objects, and their titles—ostensibly invites the pursuit of references. The materials are perhaps its most interesting element to investigate. For example, the decorative tiles of the Mycelium Mausoleum are made of Myco Foam—a compostable alternative to Styrofoam, produced from post-agricultural waste transformed through fungi growth. Like the title No Birds, No Bears, No Land, No Ice, the footage appropriated from the documentary Chasing Ice reminds the viewers of the looming environmental catastrophe—perhaps future generations will only know icebergs through Long’s mockups. The motif of three portholes repeated on both floors, spells out OOO—that is, “Object-Oriented Ontology.” Thus, the viewer might want to pursue the writings of such thinkers as Timothy Morton, who seek to redefine both ecology and the entire worldview in the late-capitalist post-consumer society.

I dutifully attended Morton’s recent talk, co-presented by The Contemporary with SXSW Eco. Morton spoke extensively about the necessity of overcoming the dichotomies that define our world, established by the so-called “agrologistics”, which “turns reality into domination-ready chunks of parceled out space waiting to be filled and ploughed by humans.” Morton was extremely convincing in his critique of the dominant philosophical models that define human/non-human relationships. Like many deconstructive critics, however, he failed to convey what this acceptance of pure joy might mean in practical, pragmatic terms. What might our post-agrologistics everyday life look like? I have no idea, but Morton gave me the permission to have fun.

Self-admittedly, Long’s CATALIN resides precisely in the zone of pure fun that exists in spite of the inescapable demise of our planet. Electro-pop music, video projections, and the department-store-like and dance-club-like ambience at the Jones Center ironically mediate the melting of the icecaps. Unaffected, from the distance, we watch, listen, ponder possible material solutions, and admire the beauty and complexity of the disappearing ice formations. Just by being there, I am gently implicated as one of the millions of producers and consumers of culture, whose benign and inevitable daily choices amount to the irreversible, catastrophic environmental changes. The party will go on—at least for those who like and can afford it.