When I heard that shrinky-dinks were what bonded a group of creatives at a recent meeting of Artists Anonymous, The Contemporary Austin’s art-making social club, I was hooked. Not only were shrinky-dinks a strangely fantastic childhood memory, but an indication of the program’s unassuming format for exploring who’s lurking around the local art scene. I made a decision to attend the next one.

The next host was to be Russell Etchen, co-founder of the former East Austin bookstore, Domy. Through the years he has been involved in a myriad of community-focused art efforts that give him local street cred — nearly every person I met at my first Artists Anonymous night described Etchen as their reason for being there.

According to Etchen, “bringing these games to the Contemporary Austin definitely stems from my years of drawing in a group environment. I’m involved with a gang of artists in Houston who call ourselves Sketch Klubb and have been drawing together for nearly ten years in an environment of light-hearted anarchy. In the years that I have lived in Austin, I’ve tried to wrangle the spirit of Sketch Klubb from time to time.” 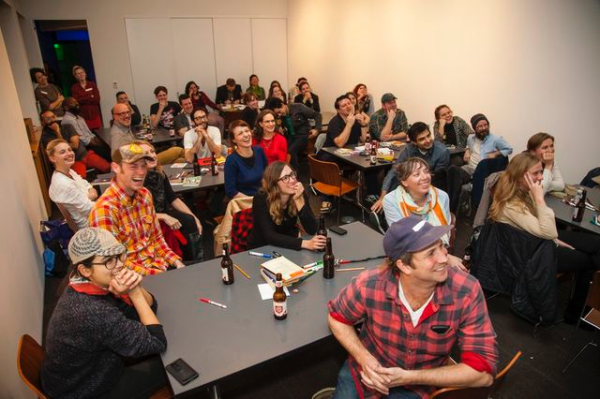 Artists Anonymous has had four meetings since kicking off last fall, each focusing on a different media. Andrea Mellard, Contemporary Austin’s Director of Public Programs & Community Engagement, describes it as “a new experimental program that brings artists and the creatively inclined together in an informal format that is open and playful, encouraging the exchange of ideas and emphasizing the process not the outcome.” She recounts the shrinky-dinks session, led by artist Matthew Winters, as a particularly successful one. 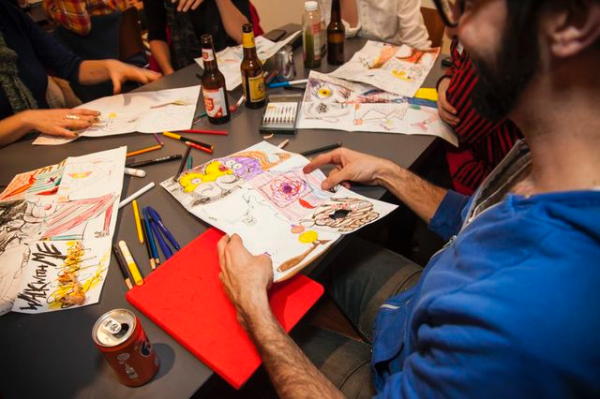 I noticed right away at my first Artists Anonymous that I was in great company. Etchen led us through the old surrealist parlor game called Exquisite Corpse. Players write or draw on a sheet of paper, fold it to conceal their markings, and then pass it to the next player to add their contribution. Says Etchen, “I knew that I couldn’t expect a group of folks to feel comfortable drawing without some restraint. These drawing games seemed like something that everyone could relate to.” 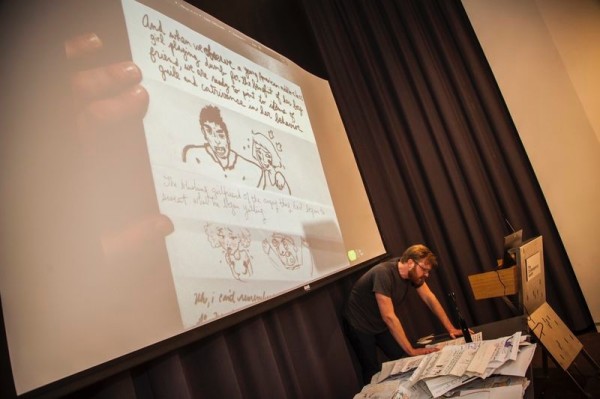 The game’s roots go back to the early 1900’s, with stories of Andre Breton, the founder of Surrealism and an original member of Dada, playing Exquisite Corpse at a home in Paris with fellow artist friends Marcel Duchamp, Yves Tanguy, Pierre Reverdy, and others. Breton spoke of the game as “the most fabulous source of unfindable images”—an embodiment of his definition of surrealism as being the spontaneous exploitation of ‘pure psychic automatism.’ 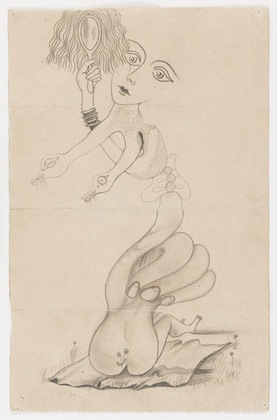 Dabbling in collective consciousness at The Contemporary Austin’s Jones Center, in a room next to the surreal glow of Charles Long’s apocalyptic icebergs-meet-mushrooms world (the museum’s current exhibition), felt apropos. One by one we marked up our respective folded sections, as the sounds of sketching, chatting, and laughter grew. When all sections were complete, the paper was unfolded to reveal a unified assemblage of images. Seeing the images in their entirety revealed the game’s essential charm: technique need not be as winning as wit, boldness, diversity and originality. The sheer mash up of levels, styles and personalities is what makes the game entertaining and fun. Says Etchen, “For me, it was about getting a group of folks together in a room to draw and laugh out loud. Most artists work in a void and rarely get to work in such a loose, fun setting.” 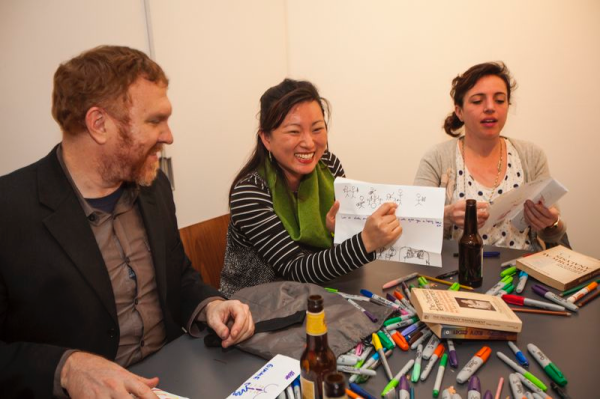 The game’s ability to inspire chance-based, juxtaposed composites and artistic camaraderie was the subject of the 2012 MOMA exhibition titled ‘Exquisite Corpses: Drawing and Disfiguration.’ Part of MOMA’s programming for the show included an interactive Exquisite Corpse-playing party, similar to the Artists Anonymous night at the Contemporary Austin, for which the invitation featured a quote by Eleanor Roosevelt – “The greatest pursuit of an artist is collaboration. Especially drunken collaboration with friends.” The exhibition included ‘Anagram’, a 2003 drawing by Anna Gaskell, on which she commented, “The body is like a sentence that invites us to rearrange it, so that its real meaning becomes clear through a series of endless anagrams.”

So, exactly what does emerge from the uncensored, anonymous collective conscious? It’s a whole lot of love, sex, violence, monsters, animals, and fantastical, childlike absurdity that, as chance would have it, occasionally intersects poignantly and hilariously. Austin-based artist Elizabeth Chiles, who participated in Artists Anonymous, said, “The exquisite corpse format is freeing for me. Because I know that the work is a blind collaborative collage, I find myself wanting to play — not taking myself too seriously as an author — and just respond to the page and whatever lead I’ve been given. It’s so fun that during the ‘show and tell’ at the end of the evening, people laughed until their bellies hurt!”

Discovering interesting artists added to the fun. Seated next to me was Aron Taylor — the one-man show behind Quick Draw Photo Booth. He brands his brainchild as a “portraiture performance” in which participants sit and pose similar to an automated photo booth, only a hidden Aron quickly draws 3 photos in 3 minutes, producing a hand-drawn photo strip. With clients like the Thinkery, SXSW and The Continental Club, Aron’s ingenuity is exactly the source of inspiration one would hope to find at Artists Anonymous. 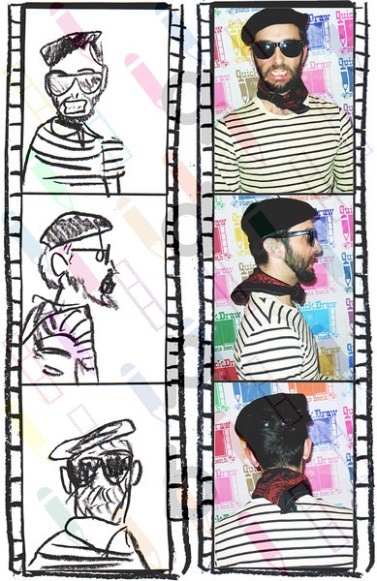 Artists Anonymous is a unique program that helps foster community among artists and art lovers as Austin’s art culture continues to evolve. “If working artists find this to be an event that offers more opportunities for conversation than the usual gallery opening and creatively-curious people try out a media or skill and have a good time doing so, then I think Artists Anonymous is a success,” says Mellard.