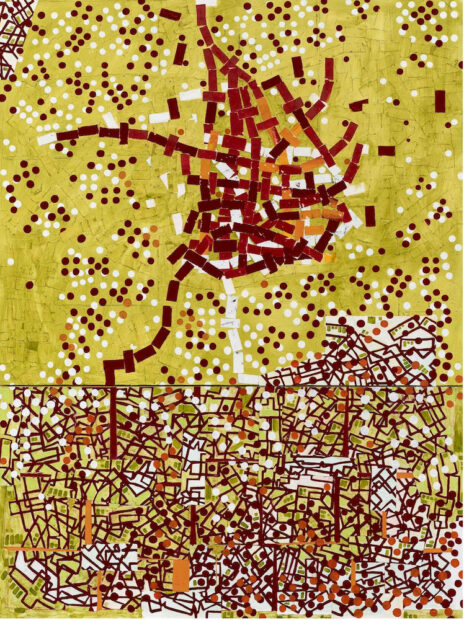 San Antonio contemporary art institution Ruby City has had an active summer, following a long period of pandemic-forced closure. It re-opened on June 17 with installations by Isaac Julien and Margarita Cabrera, along with its inaugural exhibition, Waking Dream, which has been extended through summer 2022. In July, Ruby City announced a new acquisition to its permanent collection: Untitled (2021), a large-format painting by Houston artist Rick Lowe.

The two-panel abstract work draws from Lowe’s long years of community work in Houston, drawings representing what the artist calls “domino culture” in a statement accompanying the acquisition. “While dominos is a board game like many other board games played around the world, I find that dominos in particular generates a kind of culture in communities where it is played,” Lowe states.

From 1993 to 2015, Lowe directed Project Row Houses, an arts-focused community center located in the historical, culturally significant Black neighborhood in Houston, the Third Ward. In 2014 he received a MacArthur Fellowship Grant for his stewardship of the organization, which he co-founded. Untitled (2021) is part of a recent series related to Lowe’s deep engagement with community — “an investigation into how mapping domino games could help me better understand the mapping related to my interest in urban development and other social and political realms,” in his words.

On the heels of that news, Ruby City has announced that it is re-activating its Studio space as it takes part in hosting the 2021 Texas Biennial. Entitled A New Landscape, A Possible Horizon, this year’s Biennial is taking place across five Texas venues, four of which are in San Antonio.

Ruby City’s Texas Biennial exhibition will feature the work of Jamal Cyrus, Melvin Edwards, Ariel René Jackson, Sondra Perry, Ann Johnson, and Mich Stevenson, and will broadly present “new ways of seeing and interrogating the past [and] investigating and creating a new future,” according to a press release.

The special exhibition will open this Thursday, August 5, and remain on view through January 30, 2022. The rest of the 2021 Texas Biennial programming launches on September 1 and will run through January 31, 2022; stay tuned to Glasstire for more coverage.