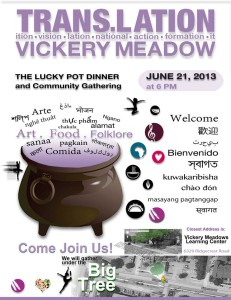 Lowe wants to translate the success of Houston’s Project Row Houses to Vickery Meadow, bringing art, commerce, and community into the neighborhood, culminating with a series of open markets starting October 19th, the opening date of the Nasher XChange exhibition. In March, Lowe visited the area to give a talk on the project, hoping to begin a sense of neighborhood buy-in, reported the Dallas Observer (who ran a 2012 in-depth cover story on Vickery Meadow). There was also an informal “Meet and Greet” earlier this month. The project, now called “Trans.lation: Vickery Meadow,” has also started a Facebook page.

On June 21 at 6 p.m., the project will host “The Lucky Pot Dinner and Community Gathering” at 6327 Ridgecrest Road near the Vickery Meadows Learning Center. Specific directions: “We will gather under the big tree.”

Fans of Rick Lowe can meet him next month at this fabulous art event in the Design District!

$11 admission.
$11 sponsors a day of program for a child)
20% of all art sales that evening will benefit Heart House.

For the first time in 33 years, Carson Art Gallery is opening its doors to the public and marking down their artwork, including originals at almost 60 percent the original price and giving 20% of its sales to Heart House Dallas!

Heart House Dallas is a free after school educational program that provides a safe haven and academic support to at-risk children, while encouraging them to become good citizens. Visit http://www.hearthousedallas.org for more information.

For press inquiries about the event, please contact:
[email protected]