In what feels like a direct answer to detractors of Dallas’ very centralized and compacted (and rarified) still-new Arts District, the Nasher Sculpture Center has made a major move toward the idea of accessibility and democracy in art. Of course it’s the Nasher that’s doing it, because the Nasher is the only major institution in this region that seems to be doing everything right these days.

The plan, called XChange (with the “X” standing for roman numeral ten) is a fascinating proposition that, if it works, could get the rest of the world looking at Dallas differently to how it does in the wake of, say, the Museum Tower fiasco. Dallas keeps growing after all, so more people means more culture, period. And the X means the tenth anniversary of the Nasher Sculpture Center itself. 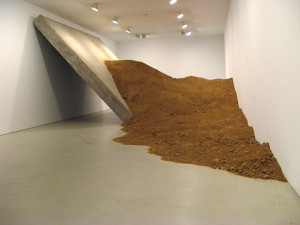 The press conference today at the Nasher was packed with bureaucrats, the press and their camera crews, curators and also a few academics, collectors, some dealers and some artists. It was a serious room—everyone, I think, kind of knew what was going down but no one knew any real details. The whole City Council was there. None of them hit one another, that I saw. The Dallas mayor, Mike Rawlings, gave a big speech. Then Jeremy Strick, with the help of a video presentation, laid it all out.

So, think Documenta in Kassel. But for the first time in history, an actual museum, in this case obviously the Nasher itself, has spearheaded a massive citywide public artworks initiative featuring international, regional and local art stars to create site-specific works to be installed in public spaces throughout the city of Dallas. Ten artists, ten pieces. It opens October 19, 2013, and closes February 16, 2014.
The list of artists includes some greats: Rachel Harrison of New York, Charles Long of LA, Houston’s total rockstar Rick Lowe, DFW’s own rockstars the Good/Bad Art Collective, Alfredo Jaar of NYC and others. For a full list, please see the link. The artists represent a great cross section of disciplines and viewpoints. The Nasher has thus far raised about $1 million from various sources and will continue to raise more. This is a big undertaking.

UTD is going to document the whole thing (bless them!) and no doubt there will be major Nasher programming around the works and artists. How the art history departments of the other universities around here haven’t been totally on the ball with this is a little beyond me, considering it opens pretty soon, and that question was also, probably, on the minds of the other very few representatives of universities there. I wasn’t even there as curator of TCU. I was there for Glasstire.

Nonetheless, it’s an exciting development, and can only help Dallas’ reputation as an art-friendly place. The mayor was careful to point out how much money the arts can generate in any city, which is what his council needs to hear over and over before they’ll believe it.

As wonderful as it all sounds, how this initiative will actually play out should be interesting to watch: For instance, Rachel Harrison doesn’t normally accept public work commissions. Good/Bad hasn’t worked as a team in years. Some of the artists are having to do much of the work from as far away as the Netherlands or Switzerland. But this is great timing really, given the interior buzz of the art scene here, from the grassroots up. I’m really looking forward to it.

Now I realize that not all these locations are strictly in Dallas, but none of them are in Fort Worth, and that’s all that matters.

What about the ten points of highest elevation in a largely flat city? That way visitors could approach the art from below, in a posture of submission.

I would be happier with this idea if The Nasher put more emphasis on Texas artists. Further, I would find more real benefit for Dallas, if the art works, as installed, were to remain permanent.
However, I do admire the concept and seeming forethought that has gone into the project. Kudos.
Finally, I hope that those same monied, political, and “chronically over reported on, generally” personalities, who seemingly participate in the visual arts here as societal events, political stepping stones, or ego strokes do not once more get the press and credit for what is supposed to be an undertaking, for the benefit of the public. There are so very many who, as artists and as art teachers, advisors, contributors, and viewers and appreciators of art in our city, when anything even remotely like this appears, are always overlooked and even disregarded. A public undertaking to impact this city should include ALL of those engaged in the arts culture here. I really do hope that this time things will be different.

Dan articulates the populist position, so for completeness’ sake, I’m going to voice the elitist position. This should absolutely not include “ALL of those engaged in the arts.” Most art anywhere is crap. Most art in Dallas is crap. Most art in Paris is crap. Only a tiny fraction of art is worth preserving. Michelangelo. Picasso. Let’s not waste our time vapidly cheering the crap that constitutes the majority of human endeavor. Let’s instead celebrate the tiny few geniuses who have the capacity to take us beyond ourselves.

I suppose every artist produces crap (or disappointing realizations) as they stretch and grope towards the next revelation. Unfortunately Picasso’s promoters and heirs considered every mark he made a stroke of genius (and profited from this viewpoint). Major museums are the same (and this is where your elitist position quickly rolls downhill): Host a major traveling exhibition of the “great artists” and every soccer mom for miles around packs her kids in the suburban and comes to the city. At the end of the day the museum shop is emptied of picture postcards and coffee table books and mouse pads printed with Van Gogh flowers…now I sound like an elitist. By the way, I’ve never met a Van Gogh painting I didn’t like.

I’m not saying this is necessarily bad—we all start our interest in art at some point, and the educational model is closely aligned with the museum formula. But remember, Picasso was inspired by anonymous African art, so perhaps it is worth our consideration as well…and we go from there with interest and eyes that see beyond the same old dancing canvases paraded before us.

Hi, Jethro and Russell…. I didn’t suggest that every artist in town should be included in the actual art. Yes, TEXAS artists, some of whom are as good as anyone else, should be better represented, in my view, but not every MFA graduate up and down the street. And certainly not ONLY Texas artists. Anyway, I am only saying that the hoopla, uproar, media coverage, photo ops, interviews, discussion, and press releases should include the broad range of ALL of Dallas’ art world. If this is for Dallas, so be it. And I think that it is. But it doesn’t need to turn into still another cultural event that features the same politicos, social butterflies, and monied elite, as always. It’s art. And art is for and about everyone. So let’s include everyone in the discussion, etc. in a very obvious way.