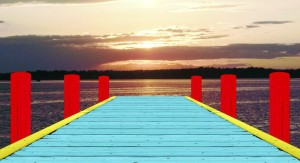 In celebration of its 10th anniversary in October, the Nasher Sculpture Center announced that it has commissioned ten public art works at ten diverse sites throughout Dallas. While they have released the names of the ten artists, specific project plans are being announced one at a time throughout the summer. Ruben Ochoa‘s reclaimed material sculpture at the Trinity River Audubon Center and Rick Lowe‘s “social sculpture” in the Vickery Meadow neighborhood have been announced and celebrated. Now the Nasher has released details of a third site: artist Ugo Rondinone is designing a simple wooden pier that will be placed on the shores of West Dallas’ Fish Trap Lake.

Known for his poetic and usually optimistic mixed-media works, Rondinone will paint the pier in vibrant colors in order to “foster a transcendent experience through an ordinary act.” The site was originally part of La Reunion, a utopian community of French, Belgian and Swiss settlers founded in the 1850s. It is now owned by the Dallas Housing Authority and is surrounded by several schools, a YMCA, a Girls Inc. of Metropolitan Dallas location, a Dallas Public Library branch, and a senior living community.

When the Nasher XChange initiative was first announced in February, Nasher Director Jeremy Strick explained the public art project: “This is not art produced elsewhere and dropped into a public plaza.” Explaining how the artists plan to explore Dallas’ history and work with its current communities, he added, “Instead, it is art created and inspired through the very essence and part of our diverse communities. An art that reflects back on the places and its future.”