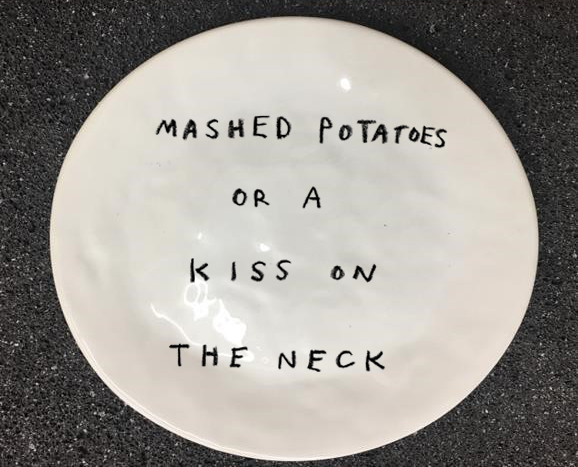 The name of the Nasher Sculpture Center’s affinity group for practicing artists in the north Texas area is “Artist Circle.” (Many affinity groups describe themselves as a “circle.”) Most collaborative projects could be described as “circular,” benefitting both (or all) involved. And, hey, most plates are literally shaped like a circle.

The Nasher has now announced The Circle Project, an initiative that seeks to highlight the talent of the artists who are part of the Artist Circle through a design partnership with Cerámica Suro—an established ceramics studio based in Guadalajara, Mexico that is known for its frequent collaborations with artists. According to the press release, the Nasher will commission an artist from the Artist Circle to design a set of limited edition dinner plates and will debut each year at the Nasher Store in conjunction with the annual Dallas Art Fair in April.

The artist selected for the inaugural Circle Project is Pierre Krause, a self-described “post-lol multimedia thing-maker, exile writer, couch curator, SoundCloud rapper, DJ and full-time freak.” (To read the 2015 “Glass Houses” feature on Krause, go here.) The Nasher also states, “For this commission, Pierre has used the idea of a meal as the genesis for a series of text-based images that are tantalizingly suggestive—words and phrases that tease out ideas of desire, appetite, and consumption.”