by Matthew Bourbon May 24, 2022
FacebookTwitterEmail 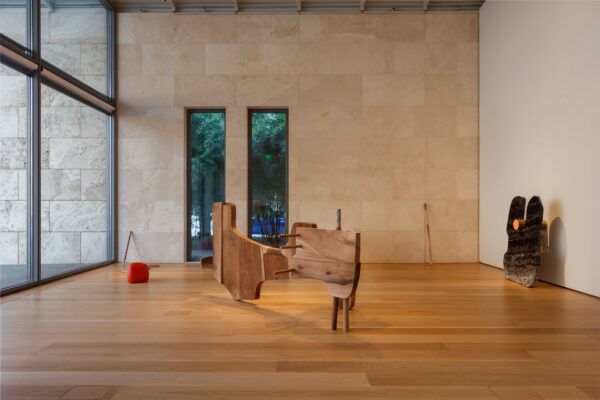 Nairy Baghramian was recently awarded the prestigious 2022 Nasher Prize. As part of the award, Baghramian was offered a small exhibition of her sculptures gathered into an installation. Later this fall, Baghramian is scheduled for a full-blown exhibition that this smaller show presaged. The mixture of objects that was on display, entitled Misfits, 2021-2022, were pill-like shapes loosely inscribed with calligraphic paint sitting amongst intermittently colored wooden poles and a family of other shapes formed from walnut wood.  The placement of the various objects felt carefree with an underlying precision and rectitude found in each form.

What’s clear is that the artist is deeply attuned to the nuance of profiles, surfaces, and material transitions, as any good sculptor should be. Beyond this, a nascent narrative undergirds the arranged objects. Curating a constellation of relationships within and between her artworks, Baghramian deftly creates a simultaneously casual and controlled series of connotations, as if we’ve stumbled upon a uniquely aesthetic junk yard or a formally sensitive kindergarten playground. It’s difficult to speak only about one object, but for me the most evocative of Baghramian’s Misfits is the largest of all the sculptures.

In this work, Baghramian almost footnotes other forms, such as hand-crafted furniture, puzzle games for children, and most strongly the sinuous shapes of Henry Moore’s reclining figures. By mixing these associations, the artist complexifies our looking and feeling about the object. Further deepening the backstory is the walnut wood that is used as the predominant material of this particular Misfit. The elegantly striated walnut is a remnant used by her artist friend Danh Vo, who obtained the wood from a cleared orchard owned by the son of Robert McNamara, U.S. Secretary of Defense to John F. Kennedy and Lyndon Johnson. McNamara was well known for his sharp stance on the Vietnam war. The history of this material has a particular spark when used by Danh Vo, but merely becomes the received backstory that any object might have when used by Baghramian. By purposefully adopting a type of co-making with Vo, Baghramian is literally at play with another artist.  It’s of no small import that the sculpture felt like the prow of a small ship or a polished jungle gym to be climbed by young feet and searching hands. In Baghramian’s usage, the larger main form is raised on wooden stilts and occasionally penetrated by wooden or marble dowels.  It’s a sculpture as bug, built of different parts implying a sly sense of movement. In fact, all the works in this room of materials felt like they could be infinitely rearranged or rolled into a different position.

As “misfits,” these sculptural objects harbor eccentricities; what’s curious is that each has an offbeat peculiarity, such that the sculptures feel at home with themselves, and also happy together. Baghramian’s skill in her making and her thoughtful orchestration imparts a sense of determination to the objects, even as they hold fast to quirks, associations, and buried histories — much like the complicated lives of human beings.