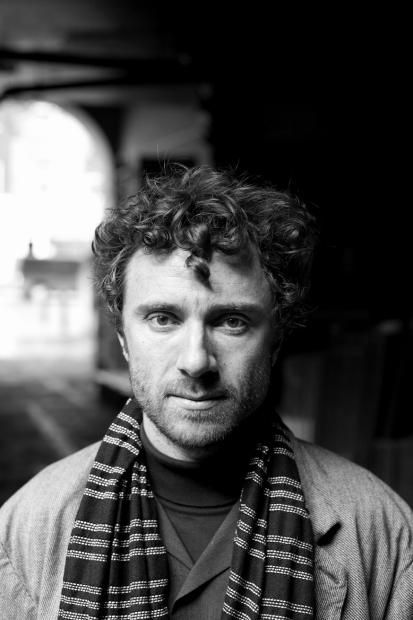 Thomas Heatherwick’s name is attached to the London-based architecture and design firm he founded in the 1990s, but, as he describes the process in the introduction to the 600-page (!) book that accompanies the show, the projects the studio undertakes are all collaborative. Nothing is done solo.

The night before my second visit to “Provocations,” the Heatherwick Studio show at the Nasher Sculpture Center I saw an episode of Top Gear on BBC America which featured James May driving the Heatherwick-designed new London city bus. He loved it, happily pointing out features such as a video monitor to show available seating on the second level and deep grooves in the rubberized cork floor to facilitate rinsing unwelcome fluids away at the end of a busy day. At the Nasher, the bus’s rear end entrance (minus the hand railing for the stairs) is on display in the entrance gallery. 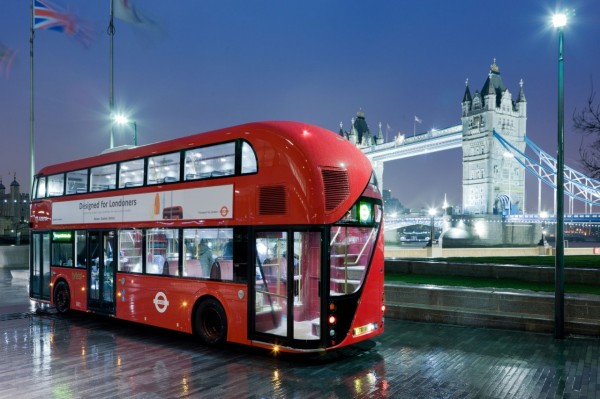 The new bus in its natural habitat 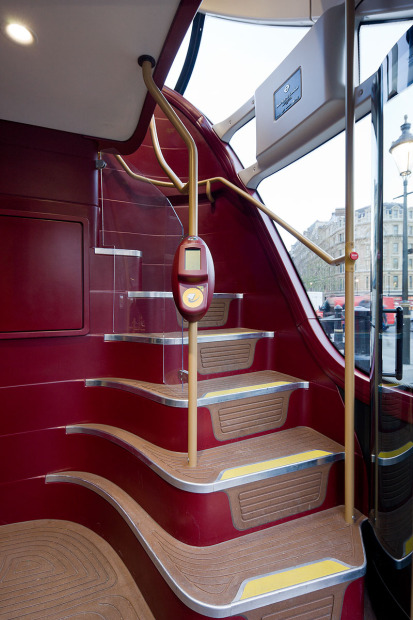 The public nature of much of their work means that the studio enjoys quite a popular culture presence beyond Top Gear. For example, the “Rolling Bridge” over a London canal has made several Web lists of “cool things” for sites such as Mentalfloss and Tripadvisor. It really is a cool thing: hydraulic pistons push against cables in the bridge’s railings to make the whole footbridge roll up into an octagon on one bank of the canal — a total reimagining of the idea of a drawbridge.

Another, more elaborate bridge designed to span the Thames involves electric winches and cables that spool hinged bridge sections into two heart-shaped bundles atop piers in the river. It remains unbuilt but was represented in the show by an eight-meter working model the studio built for a float in a parade. A hand crank inserted in the pedestal drives the mechanism. Unfortunately, the crank lay on a nearby plinth the times I visited the show, and I didn’t see it in action. 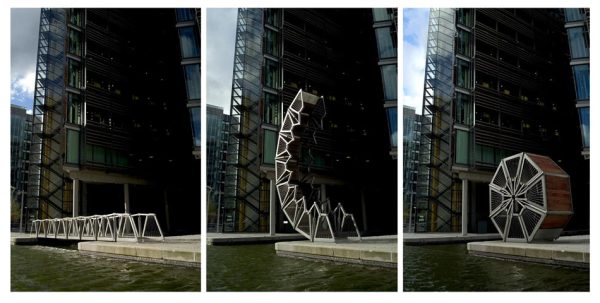 Mustn’t touch the art. But many of the objects on display tempted folks to touch anyway. A redesigned elevator button for a Shanghai mall proved irresistible to a friend during our trip to the museum together.

Heatherwick speaks of his engagement with craftsmanship, evoking the old concept of the master builder. He also writes about the benefits of scaling up crafts like jewelry making or gift wrapping to the size of a building where intimate forms can offer novel design ideas.

I’d imagine that had something to do with a mother and son I witnessed as they unabashedly stroked and poked a model for a Buddhist temple. The building’s undulating form was derived from folding thin foam rubber around a blocky model made to represent various temple rooms. The resulting hyper-organic scale model certainly invites touching. Like the Thames bridge and many other projects in the show, the temple hasn’t been built, and I can’t say whether or not the design would succeed at scale. 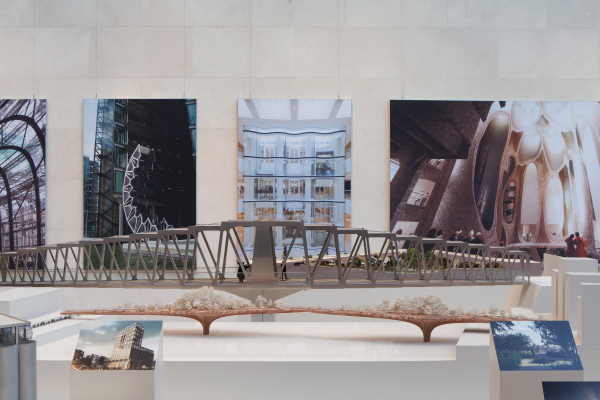 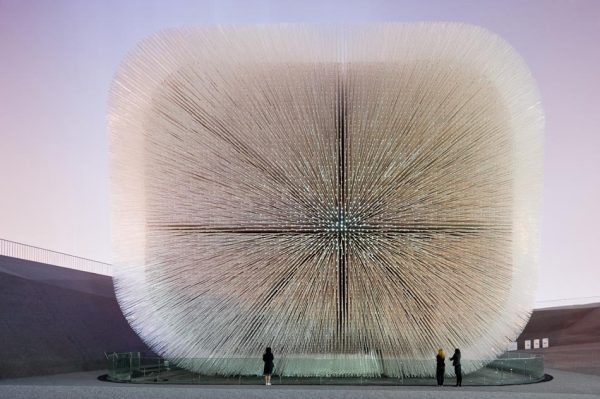 Another not-completed design will convert a huge silo complex in Cape Town, South Africa into a museum of contemporary African art. The plan calls for cutting out an enormous oval portion of the existing structure to produce an atrium made of geometrically complex voids. Negative space becomes a powerful presence, a gesture reminiscent of Gordon Matta-Clark’s “an architecture.” The scale of buildings like this (and more than a few other unrealized projects) can be imagined only incompletely, and so I hesitate to assay their merits. The show presents us with models and renderings — evidence of their value — as well as possible, but the case remains open until the work is built.

Actual examples of more modestly scaled items fare better in the museum environment. For example, a couple of extruded aluminum chairs are visually quite engaging. One sits in the entry gallery, another in the gallery to the left. The second one is nickel plated and is possibly the fastest looking chair I’ve ever seen. The irregular ribbon marking the beginning of the hot metal’s being forced through the extrusion die undulates like an impossible liquid nickel tail flapping behind a speeding bench. A number of the top-like spun chairs, installed on the back terrace where touching, sitting and spinning are allowed, were very much enjoyed by a passel of young adults who added their own spin on one of my visits. The brilliant Longchamp zipper bags and the studio’s witty Christmas cards also succeeded as items in themselves and not models of what was not present. 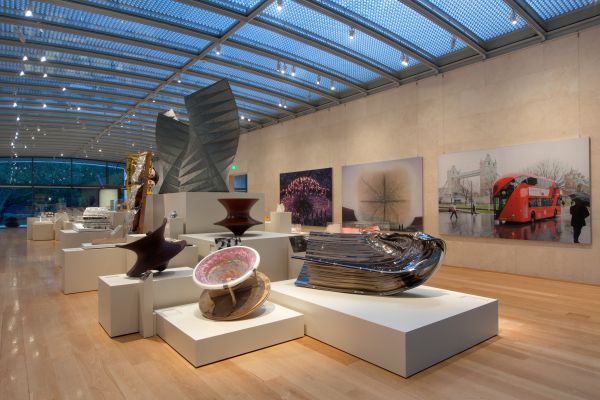 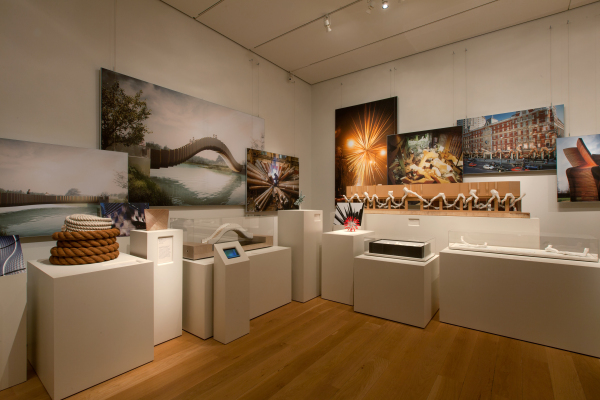 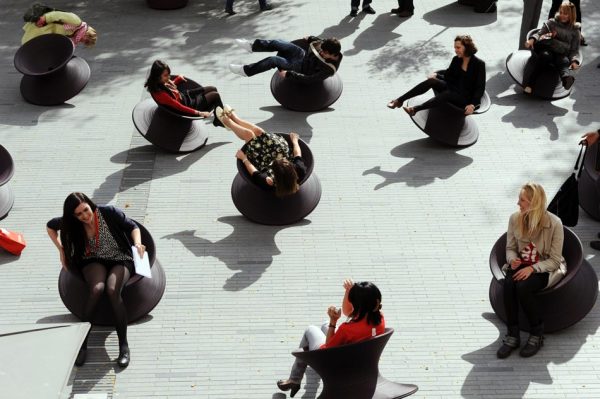 I do not envy anyone the job of designing an exhibition of so much brilliant design, but there has to be a better strategy than the concatenation of pedestals piled in the ground floor’s main gallery. If the aim was to show that Heatherwick and Co. have created a lot of designs, that goal was amply accomplished. The display design downstairs is the inverse of upstairs — an open room with items presented around the sides and back and a few things in a case front and center.

As with the book, each project documented in the show is accompanied by a didactic label asking a question meant to introduce the problem the studio intended to solve:

“How can a small building have four thousand windows?”

”Can a rotationally symmetrical form make a comfortable chair?”

“How can a building represent a nation?”

This makes sense in a catalogue of design accomplishments intended both to record the studio’s history and to illustrate something of the processes leading to the final products. It makes less sense as labels in a museum exhibition. Reading like instructional material that urges us to emulate the processes, the labels’ cumulative effect begins to evoke an insistent, humorless teacher. But the wit returns near the museum’s entrance/exit where a large machine near the door holds several wheels of rolled paper printed with jumbles of Heatherwick’s design questions. Visitors are permitted to spool out segments of paper. Like an industrialized industrial design teacher, the piece reframes the didactic labels as souvenirs, perhaps, or playful bits of a puzzle. I just wish the device wasn’t broken.

Through Jan. 4, 2015 at the Nasher Sculpture Center, Dallas

This is a beautiful example of a kind of Bauhaus/Renaissance approach to design. Design is one. Period. The art/function balance of the human eye/touch/use/scale etc. blossoms into larger thoughtful structures. This however is not always successful. For example in many trendy architecture schools there are many research projects that are not informed by the scale/function of the object – versus industrial/3d design students where detail/function/aesthetics are crucial. Although this “new” breed of architecture [and I have witnessed it since the 90’s] are making beautiful sexy objects the MAJORITY STILL have have no idea how their projects work on a functional/sustainable/urbanistic/material/economic level what have you.

And then! The architecture students of this era that simply mimic or emulate want to scale up these schemes to a building without even knowing how it might work as a good bench.

This is where I think Heatherwick is a genius. He knows his limitations and knows where he needs someone to come in as a collaborator whether it is an engineer or an architect and make the damn thing work – on many levels aesthetically, sustainably, materially, economically etc.

Granted in my “opinion” his studio still has a long way to go. But he has the right attitude, talent and mind to truly be the next leonardo, thomas jefferson, le corbusier, eileen gray of our day.

Caveat – there are several architecture projects that have achieved criteria outlined above. But for the most part the sexy aesthetics overrides the sexy function.