About two weeks ago, I had the opportunity to preview the Nasher Sculpture Center’s latest interactive exhibition Katharina Grosse: Wunderblock. As I was escorted through the museum, I took a quick peek at the long, jagged sculpture Grosse created specifically for the Nasher that seems to pierce the glass and spill onto the terrace, as well as an outdoor piece the artist would later describe to me as “chunky.” The vibrant colors definitely stood out in both the gallery and garden and gave me a taste of what was to come for the downstairs main event.

Berlin-based Grosse is known for her ability to transform spaces using a spray gun and brightly colored paints to cover unconventional materials such as soil, Styrofoam, unhung canvases, furniture, and the physical walls of a building. Her interests include expanding the idea of painting—that it doesn’t have to be politely contained in a canvas, but can explode into an environment. 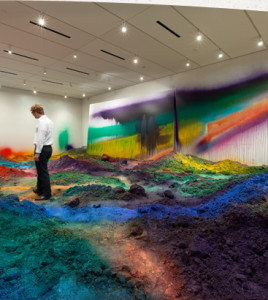 Walking down the stairs towards the Nasher’s small downstairs gallery, it was very clear that Grosse’s installation is anything but polite. The small gallery is filled with soil that had been sculpted into an uneven terrain, including a couple of canvases that came out of the earth and leaned against the building’s walls. Multicolored paint covered the ground and raced up across the canvases onto walls before dripping back down into the soil. Following my escort’s instructions, I took off my shoes and placed fabric booties on my feet. She advised that, if you wore flat shoes, you could keep them on, but one really needs to walk across the space barefoot to get the full experience. I have to say, I was glad to be shoeless.

As I very carefully picked my way over the uneven ground, my senses were literally on overdrive. Under my feet was the unusual sensation of the hardened dirt, and as I looked down to concentrate on where to step, my entire field of vision was taken over by the bold colors of this almost Martian terrain. Nasher Director Jeremy Strick happened to be walking through the installation at the same time, and told me what he found interesting about the paint was that certain colors seemed to glow while others did not. In fact, the “glowing” colors gave a pulsating effect to the gallery, almost like a Rothko painting, except that these colors engulf you, making the whole experience even more disconcerting. I have to say, it was like nothing I have ever experienced before, and I loved every second of it.

A few minutes later I had the opportunity to speak with Katharina about her work while sitting across from the large piece in the upstairs gallery. She is very charismatic, bright and interesting to speak with—just like her work. Here is a little excerpt from our conversation:

Casey Stranahan: When I was reading about you work, I noticed that, in the past, you did several canvases?

Katharina Grosse: Oh, I always paint on canvas and on all sorts of things. I don’t think that because I do this [the installation and sculptures], I don’t do the other stuff anymore. It’s all happening at the same time.

CS: And when did the installation type work start for you?

KG: Oh, very early. I did it also as a student, in different ways, of course. I went, for example, into houses that were supposed to be broken down and I painted all the walls. I like the freedom to expand. I don’t really naturally pick up borders.

CS: So you… always paint in conjunction?

KG: Yeah, I think there is no— I’m interested in how a painting can appear in space, can be everywhere. It can be on your knee, you know, or on your chair or on the floor. It could be everywhere.

KG: Yeah, but I did this before as well. I find Berlin, visually very interesting. It’s not only that there is a lot of writing or painting on the houses, but it’s also the total texture of the city itself.  It’s so diverse from many different areas and times. And it is very exciting that there is so much free space between the buildings…you can do amazing stuff there. It’s very different than here!  But that’s what I find interesting about here, too. Like kind of this area [around the Nasher] and then boom boom boom boom these big things [the sky scrapers] that shelter your body, you know?

CS: And so this piece [in the gallery] I heard is site-specific and you made it for the Nasher?

KG: Yeah that’s right. Jeremy asked me at a moment of my thinking about my work where I was starting to do these larger clunky things. And then this is the first one that is kind of cut into, and is kind of very very multidimensional. This [piece] would be very difficult to make with a digital cutter or printer. So it’s multidimensional, it’s complicated mathematically, and it’s made by hand.

CS: Is it carved? Is that the right term?

KG: Yeah, it’s carved. We use large slabs of Styrofoam and we cut into it with a hot wire. With quite a long hot wire, like, I don’t know, fifteen feet long.

CS: Where did you learn to do that or come up with that?

KG: Oh, well, we found out by ourselves, yeah. We made the cutting machine ourselves because you can’t buy these long wires, it’s quite dangerous actually. We’ve been doing a couple of these larger pieces. Since, I would say, 2009, I’m doing stuff that can be removed after the show, maybe somewhere else. And they are very different forms; they are sometimes surfaces that are warped, that lean against buildings, and I have these clunky things that are outside there that look like large—I don’t know what. Clunkier things? Chunky? And then this [piece in the gallery] is the first thing that is so carved and…

CS: It reminds me of a rock formation.

KG: Oh yeah, it could be like a rock formation. Or like something washed out, with all these holes that kind of integrate the space that’s around it.

CS: And for downstairs, do you sketch or paint before you get to a location or is most of it you reacting while you’re in the space?

KG: The painting is all done there. All the decisions I need to take are being made here in Dallas. So that’s really, really painted here. And also the clay is from here, the soil, and I brought the two canvases and buried them in there.

CS: So you’ve had the opportunity to travel around the world for these installations. Have you found that different places have different reactions to your work?

KG: Yeah, I think that the work is quite open in the sense that there is no beginning or no end and I don’t tell people how to actually look at it. So, people bring a lot of their own culture and experiences with it. And that’s what they do with every artwork but maybe this one allows for a lot of space to think about these things. So all the different places and cultures kind of think that it’s exactly connecting to them.

In Asia, it’s quite amazing because they totally have this connection to the open image. The big image doesn’t need a frame. And also, the idea that things decay, that it is a wall painting but it will go, be painted over, or you walk over the soil [in my installations] and it will get messy and that’s not a bad thing. It’s how life is…In Scandinavia where they are somehow longing for these raw colors, they also tend to invite me more often than other countries.

CS: Besides Robert Smithson, is there anybody else you see as being very influential to your work?

KG: Oh, a lot of things. I think that the cool thing about painting is that it has such a long [history], since we started to be on this planet, I guess. Like cave painting, for example, is super important to me, the sculptural surface and this kind of directness…of “what is my thought like?” and you start to make a drawing and others maybe see what you have in your head. And that’s exactly what my relationship is to that medium. It’s so direct, it’s not transmitted through an apparatus or a computer or any other tool…So cave painting, fresco painting…I mean I’m coming from Germany, so German Expressionist painting, then also, of course, the development in American post-war painting, or people like Andy Warhol. It sounds like a long history, but in the end it’s a small field, painting. It’s not like rocket science or something.

KG: It might feel [infinite] to you, but it’s something you can look at.

CS: So where have the colors come from? I mean they’re brilliant and almost disconcerting. They kind of throw you for a loop. Particularly when you’re in the space and there are all these colors that you’re not used to being around.

KG: Yeah that was an interesting thing for me, to be in this context where color is not actually a feature. It’s a taboo with culture. I mean it wasn’t in the medieval times, but there was this idea all of a sudden that gravity and the truth of material, like [Richard] Serra… for example. And that was an interesting thing of Jeremy to invite me and have another approach.

CS: And how do you hope people will interact [with your work]?

KG: Yeah, that’s the thing. We have three different locations in the same place very closely together, which is great. So you have an outdoor space, a semi-indoor/outdoor thing here [in the gallery], and downstairs, which is actually indoor but it looks like outdoor.  So I kind of turned it around, like when you turn a sock inside out. I hope curiosity is going to be a big thing, that’s the biggest thing. And [for people to] enjoy it, and find out things that you haven’t seen before. And maybe rethink what you think about moving in space.

Katharina Grosse: Wonderblock will be on view at the Nasher Sculpture Center through September 1.