Linda Shearer officially retired on Friday as Executive Director of Houston’s Project Row Houses (PRH) and, on Tuesday, PRH announced a shift in organizational leadership. Rick Lowe, who started PRH with six other artists in 1993, will officially lead the organization with the job title of Founding Director.

Lowe has had a busy few years recently. He brought his community-building concepts to Dallas’ Vickery Meadow as part of the Nasher XChange anniversary celebration in 2013; later that year, President Obama appointed him to the National Council on the Arts; months later, the Nasher officially named him as its first ever artist-residence; in the summer of 2104, Mayor Parker appointed Lowe to co-chair the development of the City’s cultural plan; the following month, he was named a 2014 MacArthur Fellow, known as the “MacArthur Genius Grant.”

“Rick feels, and the Board of Directors agrees, that he is well-poised in his career to really use his recognition and reputation to take PRH into the next chapter of its history,” said Board President Andrew Speckhard. 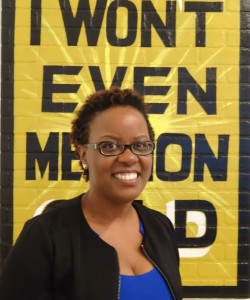 To assist Lowe in this new role, PRH has also named Eureka Gilkey, who is leaving her expansive career in Washington, D.C, where she served in the Obama Administration, to join PRH as Executive Director. Gilkey has over a decade of experience in development, activism, outreach and community relations. “Eureka has been engaged in many impressive projects throughout her career,” Speckhard stated. “She is a quick study, and this opportunity will help push Project Row Houses to the next level.”