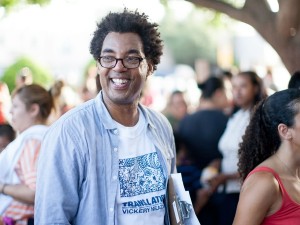 Rick Lowe’s “social sculpture” Trans.lation, initiated as part of the Nasher Sculpture Center’s 10th anniversary exhibition Nasher XChange, has been a success so far. There have been workshops, three free-standing White Cube exhibition spaces, and pop-up markets in the Vickery Meadow neighborhood. The project was designed to encourage residents of Dallas’ most culturally diverse area to share their talents and traditions with each other and with the larger city.

But the Nasher XChange exhibition is now officially over and Lowe, founder of Houston’s Project Row Houses (currently celebrating its 20th anniversary), knows that you don’t start something like Trans.lation and walk away. “I was kind of nudging them to think about an expanded engagement with that project,” he told the Dallas Morning News. They seem to have taken the hint. Today, the Nasher announced that it is starting a residency program with Lowe as its first artist-in-residence. “Trans.lation has already seen important successes,” stated Director Jeremy Strick, “and through the platform of this residency the Nasher will be able to support its continued growth.”