Last Saturday, The Nasher Sculpture Center arranged to have media and VIPs tour the sites of the Dallas-wide Nasher XChange public art exhibit. We rode around visiting 8 of 10 sites in three tour buses. The media rode on one bus; VIPs rode on the other two. We media members speculated that the VIP buses were equipped with booze and food but, when a flat tire forced us to combine, we discovered that their buses were were no better than ours.

The Nasher Xchange sites are scattered all over the city, and the Nasher has gone so far as to create the Nasher XChange app to help you know when you are near one, provide information about it, and to help you show off to your friends by posting to social media. The app is useful for creating your own tour: this exhibition is as much about going to new places in Dallas as it is about art. The bus tour helped us do it all in one day, but I suspect you would need a couple days to do it on your own. 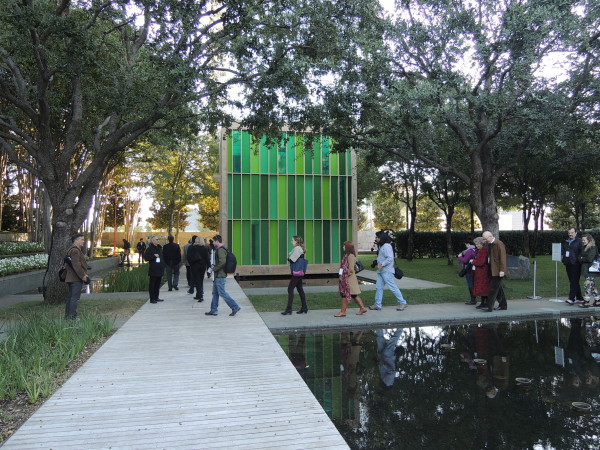 The first thing on the tour was a pavilion by Alfredo Jaar. In addition to building this beautiful plexiglass and wood structure, he will record the first cries of 5,000 children born at four Dallas Hospitals during the exhibition, and re-play them daily inside the pavillion at the same time of day as the chidlren were born. Beginning with just a few cries, by the end of the exhibition the  structure will be a cacophony. The structure is nice inside, especially when light filters through and the plexiglass glows. 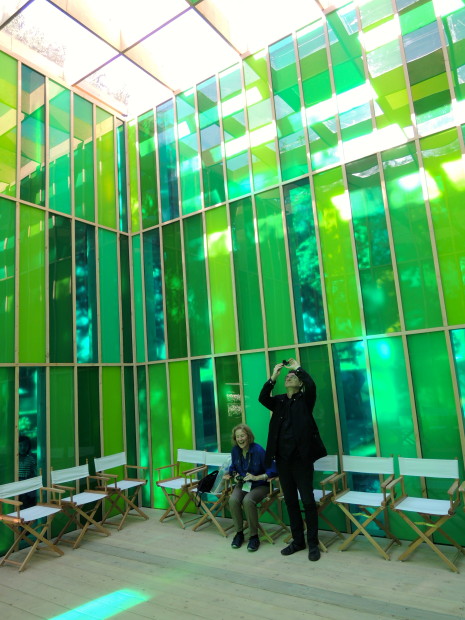 In exchange for the use of their voices, the babies’ families will receive a one-year membership to the Nasher; the children themselves will receive lifetime memberships, a new type for the Nasher created specially for this project. The goal of this membership giveaway bonanza is to alter the demographics of museum goers in Dallas by creating a zero-friction or a low-friction way for new (literally!) people to visit museums. 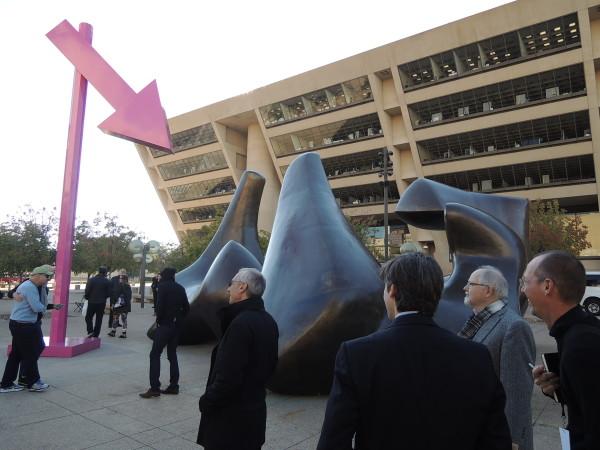 At Dallas City Hall, we were greeted by Nancy Nasher, two City Councilmen, and Rachel Harrison‘s large pink arrow which points out the pre-existing Henry Moore sculpture. When Harrison visited Dallas in preparation for the Nasher project, the Henry Moore was surrounded by barricades and in need of restoration. The arrow is now both functional and funny and I really love it, and the now-restored Moore is as good as I’ve ever seen it. Several people claimed that Henry Moore would have loved this new addition to his piece. I think this isn’t true, but it only lasts a few months and Henry Moore is dead, so it doesn’t really matter what he thinks. 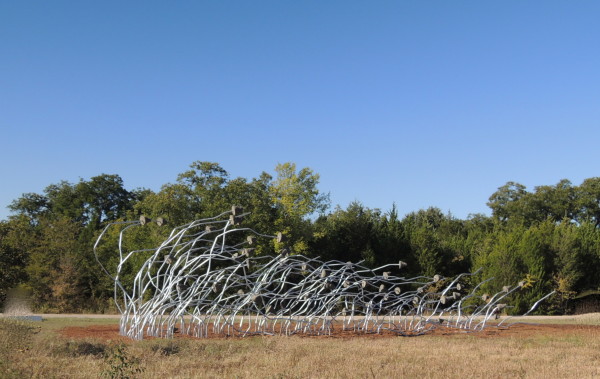 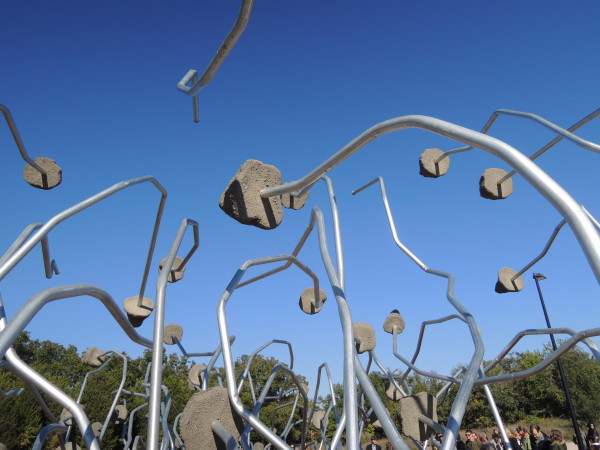 We then departed for the Trinity River Audubon Center, a place I’ve never been. The center is a hub for birders and peaceful outdoors types, a few miles south of town on the Central Expressway. They just finished installing Flock in Space by Ruben Ochoa in the past day or so; the ground was still muddy. His piece is a play on Brancusi’s Bird in Space—an arrangement of galvanized steel fence posts with the footings in the air. Not particularly stunning from a distance, and the juxtaposition of urban materials and natural environment is an obvious move, but up close the the crisscrossing and movement of the bent pipes and concrete makes for an exciting visual. 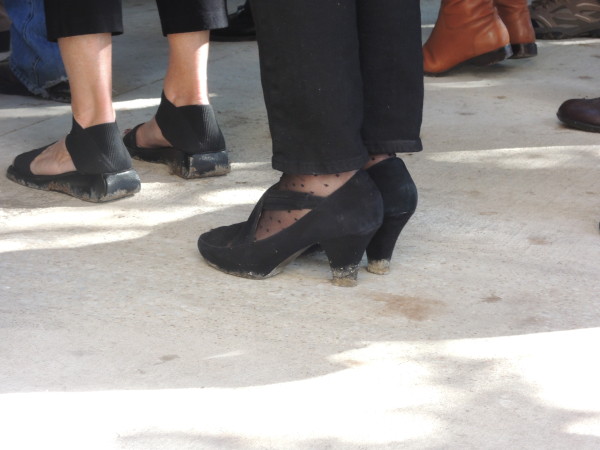 After leaving the Audubon Center, even the VIPs had mud on their shoes. 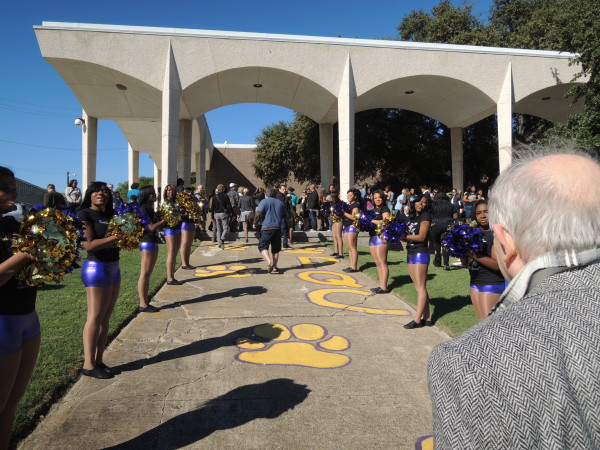 At Paul Quinn College, we were greeted by their spirit team in the fanfare. Paul Quinn is on the former site of Bishop College, a historically black college that closed amid controversy in 1988. Vicki Meek‘s collages, along with the accompanying website and app, document the artistic history of Bishop and its importance as the center of African American cultural life in Dallas. 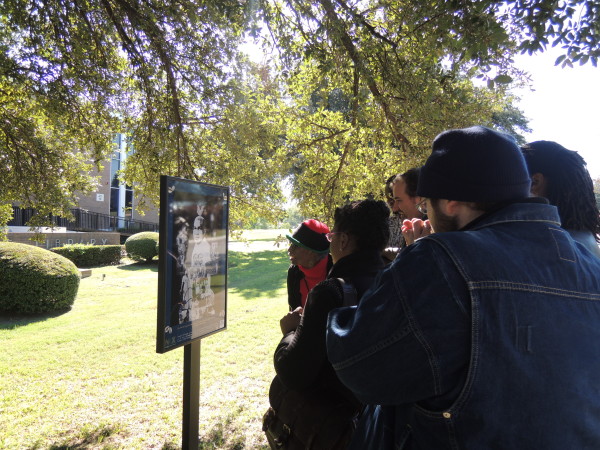 The events at Paul Quinn were fun: there was a jazz band and the spirit team; Paul Quinn President Michael J. Sorrell and Vicki Meek spoke, and then the crowd dispersed to view the artwork. The collages are presented awkwardly on plaques up and down the College’s main drag and are overwhelmed by the outdoors, but Bishop alumni enjoyed reminiscing over them nonetheless. 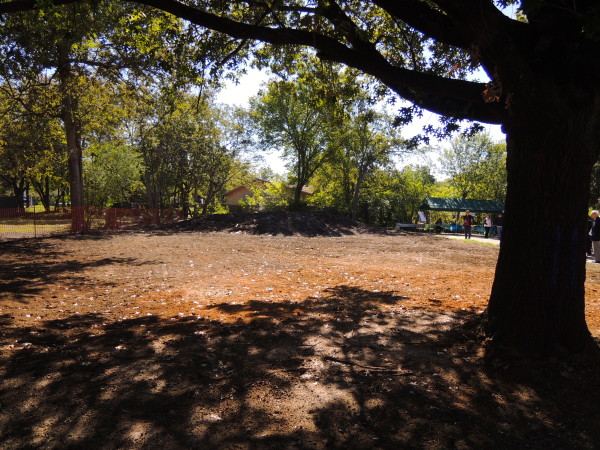 For us on the tour, it was a brief remembrance—we had to get to a funeral, of sorts. Over in Oak Cliff Gardens, Lara Almarcegui has buried a house. Oak Cliff Gardens is a neighborhood heavily in transition. Many houses are abandoned. Habitat for Humanity is tearing down the ones that can’t be saved and is building new ones. The site of Almarcegui’s sculpture is one such place. The house that once stood there was demolished, crushed up, and buried on-site. This very conceptual, barely-there piece is an odd choice to put in a neighborhood that doesn’t see a lot of contemporary art. Nonetheless, it’s there and it’s compelling and will certainly give the neighbors something to talk about and bring some interesting visitors. There are an amazing number of churches in Oak Cliff Gardens (we counted 5 in 4 blocks), so a cemetery seems appropriate. 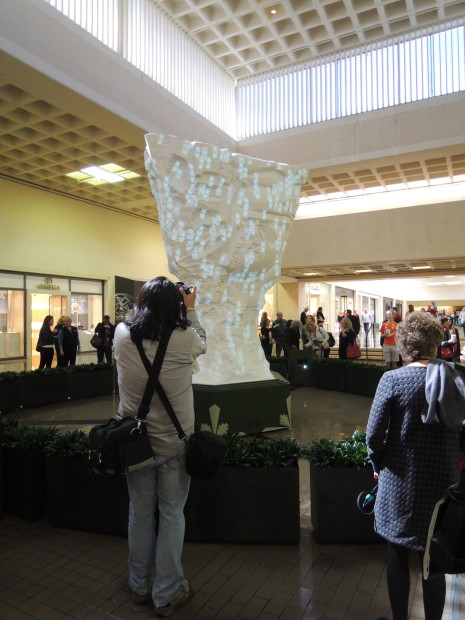 When we arrived at NorthPark Center, we were about 1.5 hours behind schedule. Charles Long’s Fountainhead was a disappointment. The whiz-bang! of being able to convert cash to virtual currency and then “toss” it into the money fountain amounted to a parlor trick. The piece itself was unattractive and not conceptually sound. As a replacement for a normal fountain where people throw real money, it fell flat. It seems like he tried too hard to use new media. I hope it raises lots of money for the North Texas Food Bank and the other charities represented. It’s a reference to Ayn Rand’s book The Fountainhead, but who cares? 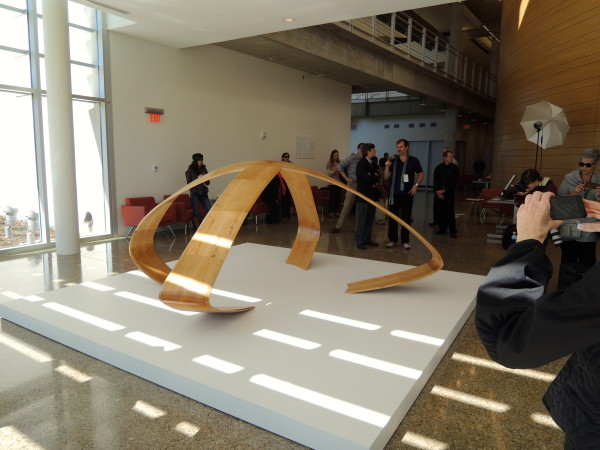 A longish bus ride from NorthPark Center got us to the UT Dallas campus, where the new Art and Technology building is really something special. I graduated from UTD in 2001 and it has really come a long way in terms of programs and facilities. The Art and Technology program has a lot of focus in 3D modeling and rendering so it makes sense that they would get Liz Larner‘s X piece, designed on the computer and output via computer-controlled milling. This is by far the most elegant object we saw all day. The actual piece will be in stainless steel, but the version we saw was in maple. 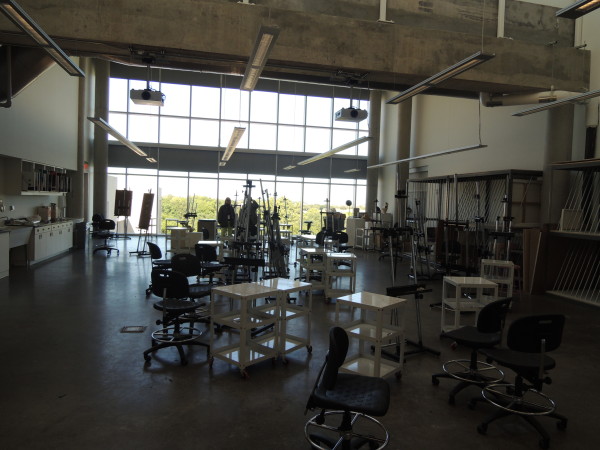 While at UTD, I sneaked away from the Nasher group and was given a very quick tour of the new painting studios, a huge upgrade over the previous digs. Floor-to-ceiling windows create some great light, but the studios are not messy enough yet; the building has only been open for a few weeks and does not officially open until November. 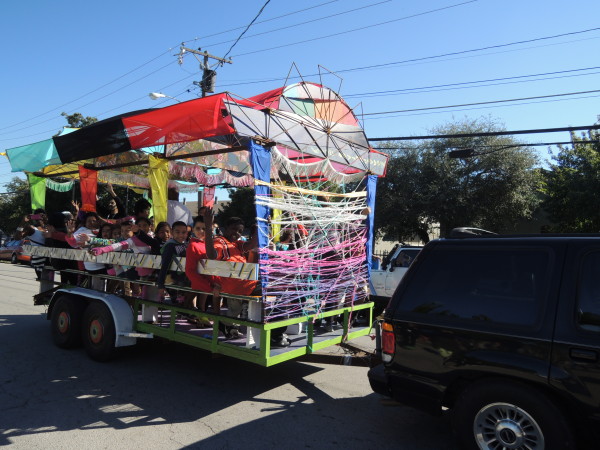 Vickery Meadow is a neighborhood where 30 languages are spoken within a 2 mile radius. There are immigrants from many places who often do not know many people outside their own apartment complex. Rick Lowe‘s trans.lation is the neighborhood’s attempt to change that. Lowe and a small army of organizers have created a market to sell their creative wares and provide a place where people can get to know each other (I got an apron made by a smiling woman who spoke no English). Included in the project is a trolly that kids really loved. I’m not sure why this needs to be dirtied up by being called an artwork and can’t just be a work of social good, but it’s a good thing it is happening. There were some hipster crafts, but there wasn’t as much engagement as you would expect; maybe there will be later.

It had been over 7 hours of tour already, and there were still two pieces left to see. We were dropped back at the Nasher and left to our own devices. I went over to the Good/Bad Art Collective‘s event Curtains, by far the most elaborate and hard to explain of all the works in Nasher XChange. I am friendly with several members of Good/Bad and had heard some things about what was going on: mainly that they were filming an infomercial and it would be aired on late-night cable. I did not want other details as I wanted to experience it fresh. Since it was to be a one-night event, I feel like I can go over it here. 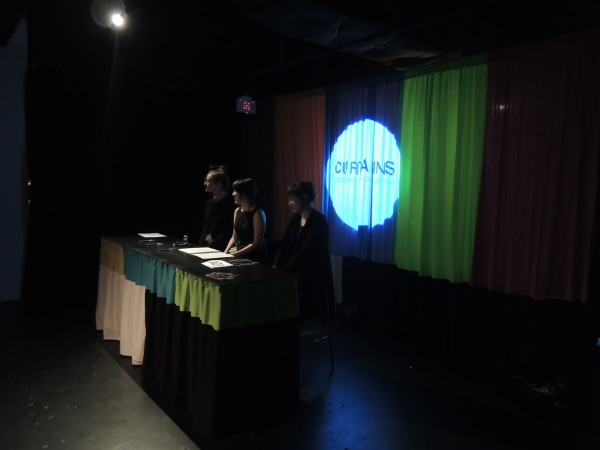 Upon arrival at Curtains, you were asked to sign a filming waiver and given a number to wear. Visitor/participants are let in three at a time. 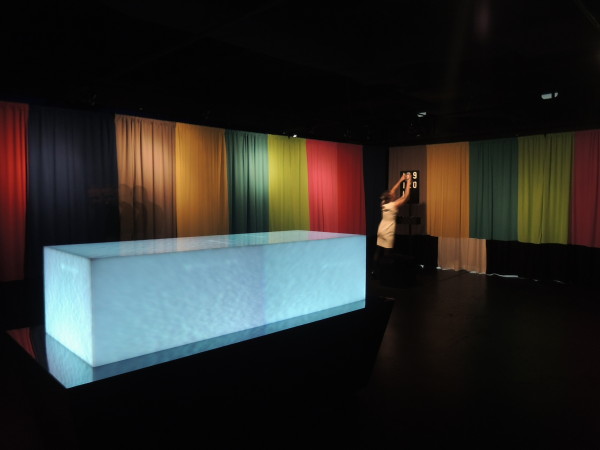 The first room is a waiting room with a glowing coffin/plinth filled with static. Your numbers are put up on a tote board. When your number is called, you are led to a series of three rooms where you are asked to perform three simple actions. First you crawl around in a circle, then dance, then hobble. Each room is lit with different colors of light, but otherwise identical. 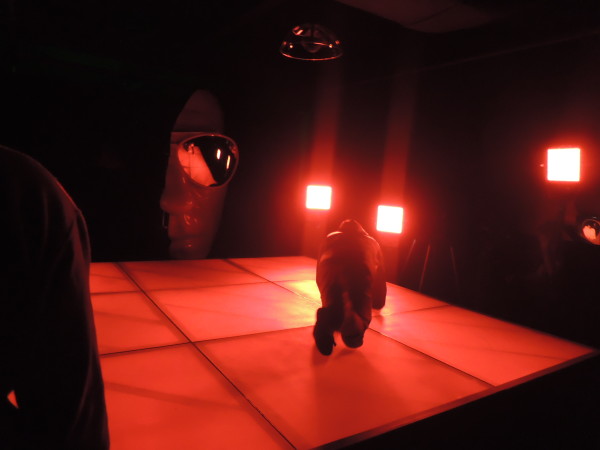 After you have completed your tasks, you are led to a a cheering crowd at an art opening where you can watch new visitors go through the same ordeal/performance of The Riddle of the Sphinx. 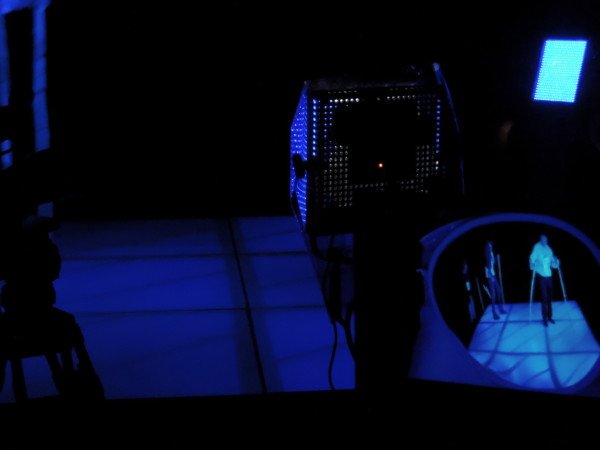 Aesthetically, the event was well-unified and looked sharp. Time will tell if the infomercial they will air is any good. It was a classic Good/Bad event: cool, memorable, and professional. It’s nice to see them do something with actual funding to provide polish.

Art shows on this scale, with so many stakeholders to please, are, in effect, curated by committee. The work will not be transgressive, cutting edge, or challenging.  The work in this show is mostly strong and does a great job of bringing local, state, national, and international artists to Dallas. This is no small task and credit should be given to the museum, its curators and its staff for putting together such a complicated citywide event with so few hiccups. 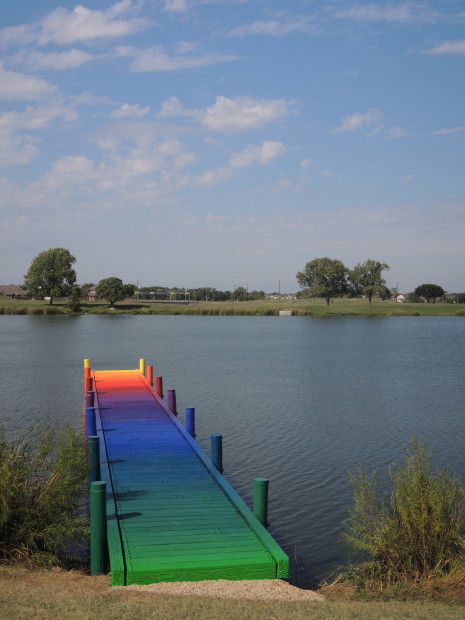 Monday morning, I stopped by the very last venue, Fish Trap Lake in far West Dallas, to see by Ugo Rondinone‘s dear sunset. The paint was probably still wet; it was being guarded by a nice woman in a security uniform. Far West Dallas is a place where literally no one goes, except for the people who live there. A nice lake, with a nice little pier. You’re going to be allowed to walk on it later.

I think the Nasher XChange is going to be very successful at getting new people to see art who normally wouldn’t and getting people who already see art to visit new parts of town. While I was at the pier, a 40 year-old woman in Prada sunglasses showed up; she knew nothing about the Nasher, or Ugo Rondinone, or contemporary art. She had seen the piece on Instagram, and came out to take a look.

Nice review Thomas. The pink arrow is cool and a couple others look interesting. Other than the money video installation at NorthPark, most of the work will not be seen by many people. I did see the NorthPark installation, it’s ok, but would work better with out the soundtrack.