by William Sarradet May 25, 2022
FacebookTwitterEmail 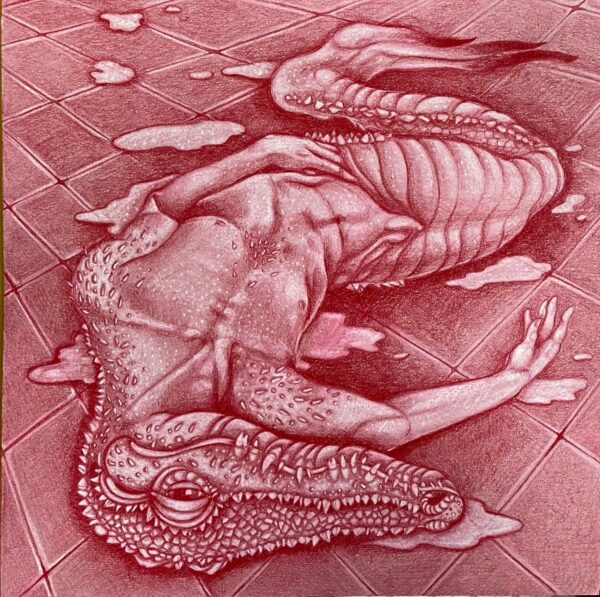 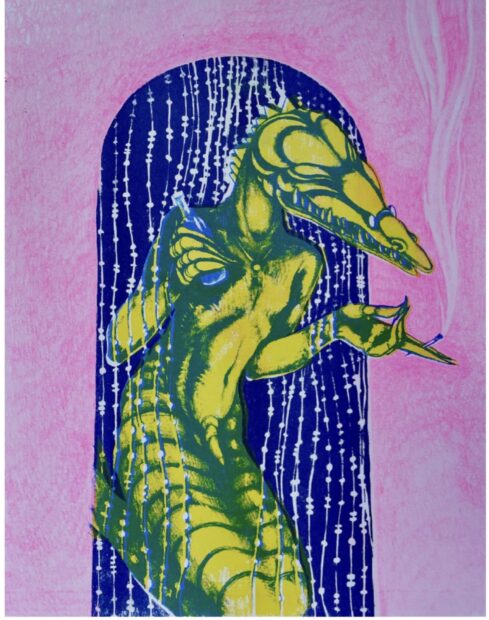 Erin Cluley Gallery has taken their project space quite seriously, and offers this exhibition of new works by Sarah Fox, some of which were originally intended to be shown at the McNay in San Antonio this spring. The work was instead exhibited at suite C136 in the Blue Star Arts Complex during April of this year, and Erin Cluley Gallery immediately reached out to Fox to gauge her interest in bringing the work to Dallas.

It is a testament to both the state of museum curatorial programs and the primary market in Texas that the work went through almost the entire, year-long exhibition preparation cycle at it’s host institution before being rejected and then swiftly picked up by a commercial gallery’s project space. The question remains: will this work, shelved by the museum that commissioned it, go on to be collected by a collector seeking a notable work in an artist’s career? Will another museum, perhaps in Texas, see the opportunity to collect the work, cementing the journey it has taken into historical record?

Of the work: Fox’s anthropomorphic wax drawings of creatures are meant to be tragic but endearing, and they are just scary enough to look at that they convey both feelings. Fox has ample experience teaching drawing in San Antonio, including experience with animal anatomy. The rendering of the characters — wolf, rabbit, and reptile — is all compelling on its own. The transition that Fox makes from drawing to video alters the characters slightly; they become wooden maquettes who mumble indications of words with no actual syllables coming from their nonarticulated jaws. Of Fox’s interest in creating work that moves from static imagery to time-based media, she had this to say:

There is a risograph print of the reptilian figure smoking a cigarette and entering a room through a beaded curtain, which exudes an air of luridness, not unlike the similarly solarized films of Ralph Bakshi. Among Fox’s characters. The feeling persists that the courtships we see in the works are welcome in a commercial gallery, where their risks can be tolerated. 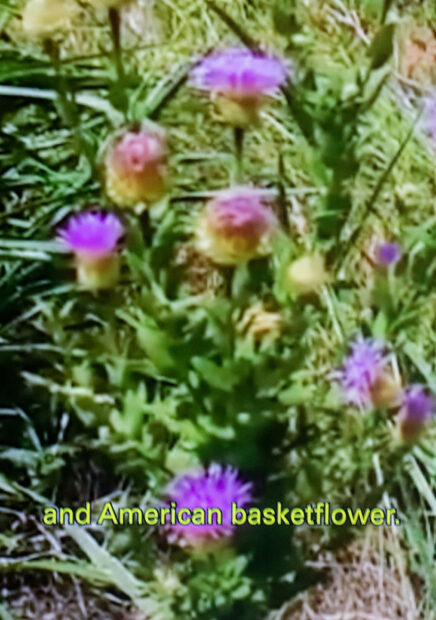 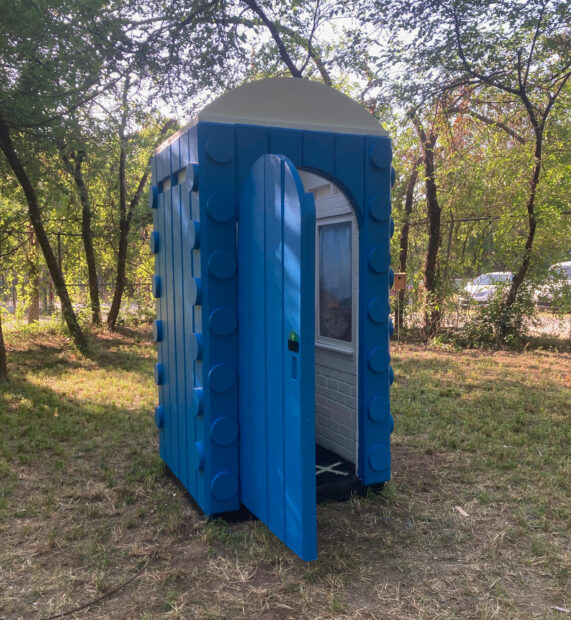 This exhibition began in June 2021, when an applicant pool of six artists hailing from Brooklyn, Miami, Bogota, Dallas, Houston, and Austin came to Dallas to conduct site visits and research on the Texas Blackland Prairie, the native ecoregion upon which Dallas currently sits. Because this ecoregion is endangered (less than 1% of the original natural environment exists today), this means that the research conducted exists in history, and that Dallas, as a place, has since been reimagined by its developers, construction engineers, and civic designers. Eleven months later, the participating artists have returned to fabricate and install the show on site, in the grassy lot known at Sweet Pass Sculpture Park.

Among the installations are port-a-potties which have been reimagined to recall the design elements of Philip Johnson’s John F. Kennedy memorial in downtown Dallas, an excavation site that has been applied with narrative signage, and a video collage work that examines the way mediatic presentations of Dallas’ built environment accidentally expose the values of the modern age. As per usual with Sweet Pass Sculpture Park’s installations, this is a unique exhibition experience: an outdoor showing of all new sculptural work in a highly collaborative methodology. 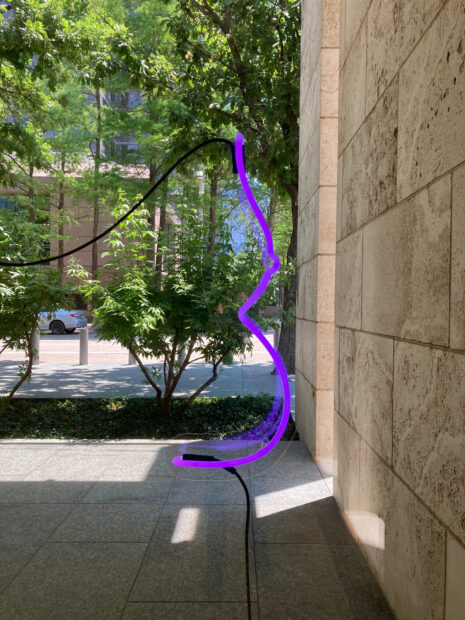 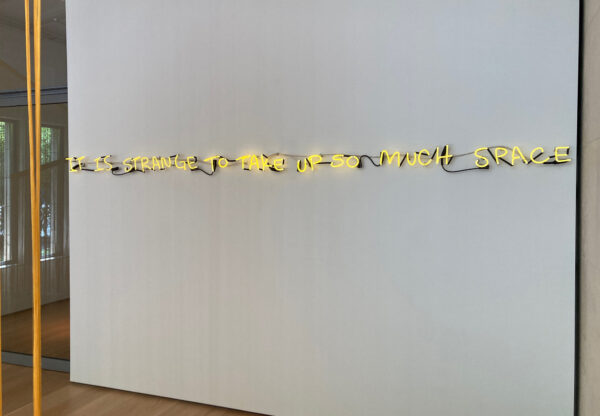 The Queer Birth Project is not simply a sculptural installation in the former gift shop space of the Nasher, but rather an open-ended inquiry into the way that queer individuals experience birthing children. The exhibition is in reference to Judy Chicago’s Birth Project (1981), which began as a survey which sought to quantify women’s attitudes on childbirth. In response to Chicago’s work, Lafleur collaborated with sociologist Katherine Sobering to collect narratives from queer individuals on their own journey of birthing children. The show is installed in three parts: an oversized version of a children’s mobile (à la Calder) adorned with yellow fringe, a processional neon sculpture showing the phases of a bare, pregnant belly, and a soundscape that presents the thoughts and emotions queer people experience around carrying children — something that much of society doesn’t understand.

Additionally, there is a survey open to queer individuals who, “[have] experienced childbirth as a gestational or non-gestational parent, surrogate, or adoptive parent,” for the purpose of locating research participants. 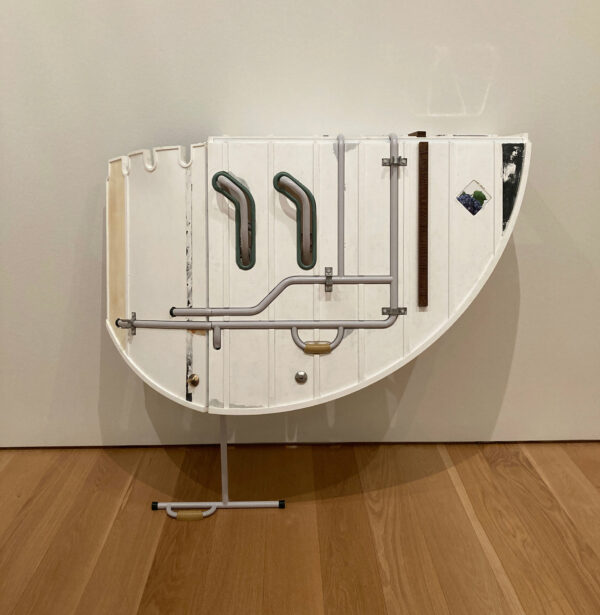 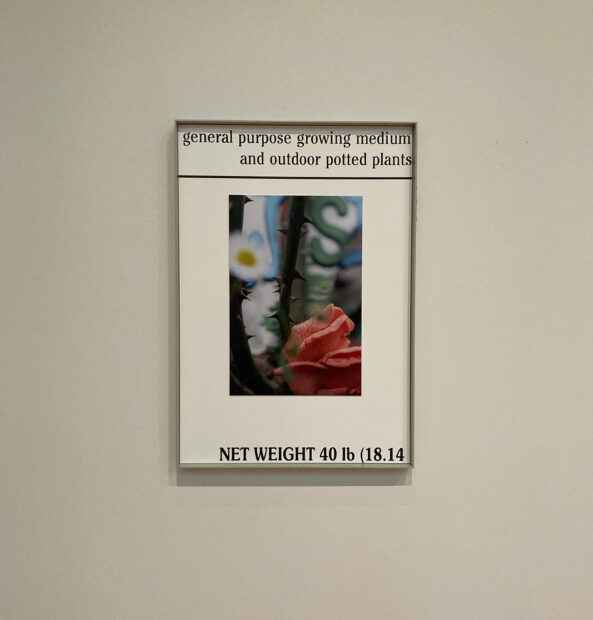 The vernacular of reuse meshes with inventive design in this show by Reus. While the implements all feel comfortably gray, like they may have been sourced from IKEA, their forms are not identifiably familiar.

Asymmetrical folding tables with numerous metal fixtures, apertures, and irregular legs and handles are the most fascinating work on view here. Steel roosters and bulls perch atop metal tubing, intentionally slatted to bend like a straw, which is also patinated in a way that intimates use and wear.

This exhibition eschews the language of “care” that is so prevalent in many shows currently, and instead presents layers of imagery and production which are relatable to our post-industrial age. And yet, the works still invite the viewer to dream of design as a pursuit which does not render sameness. 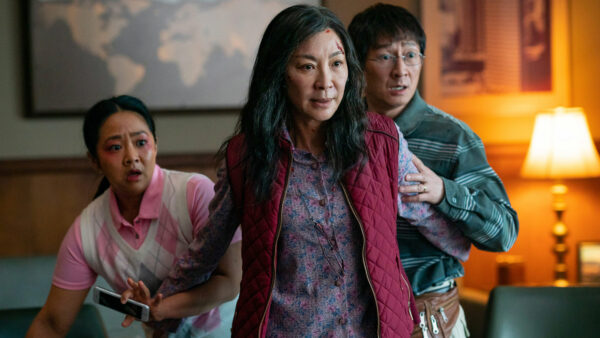 “Everything Everywhere All At Once,” (From Left to Right): Stephanie Hsu, Michelle Yeoh, and Ke Huy Quan, image via IMDB

Everything Everywhere All At Once, 2022, directed by Daniel Kwan, Daniel Scheinert

Daniel Kwan and Daniel Scheinert’s film Everything Everywhere All at Once is, as you might have heard, critically acclaimed. The film follows an Asian family of three generations that is struggling to maintain their modest Laundromat business while facing an audit by the IRS. The film is separated into three parts, with the first part introducing the multiverse component of the science fiction plot. The film’s main protagonist, Evelyn Quan Wang (Michelle Yeoh) is confronted by her husband Waymond Wang (Ke Huy Quan) in an elevator, immediately before they face the auditing agent. His body is periodically inhabited by a different version of himself — he is her husband from a parallel universe.

There are unlimited versions of Evelyn’s life floating around in reality, and they are being invaded by an evil, omnipotent force by the name of Jobu Tupaki. The film then becomes a high octane kung fu adventure, wherein Evelyn must “verse jump” (short for “universe jumping,” a kind of phasing in and out of alternate realities) to absorb skills she never learned in her current reality. It is funny, highly creative storytelling that is capable of speaking to a diverse audience.

Aside from being a fun film of kinetic acting and clever dialogue, the mechanics of its science fiction plot reveal a tender moral of familial generosity and kindness. It is as accessible as it is deep, and I’d recommend it to just about anyone.