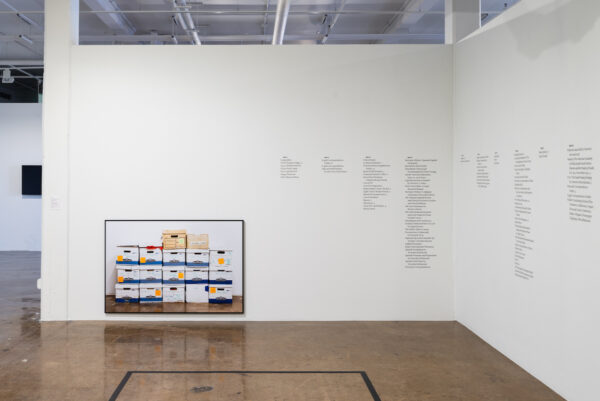 President Trump executed more prisoners than the last ten presidents combined and, before last week’s insanity, was pushing for more before he left office. Much of Mark Menjivar’s work centers on capital punishment, specifically how trauma from violent acts worsens and compounds with the resulting state-sanctioned violence. It affects not just the families of victims and perpetrators but the entire society in ways both seen and unseen. Yet these stories often go untold.

When sentenced to death row, prisoners endure isolation, exclusion from educational and employment programs; sharply restricted rights to exercise and visitation, and up to 23 hours alone in their cells. But a death row sentence also incites a wrangle of legal issues and red tape, often causing lengthy delays before execution. Texas executes more people than any other state, with 570 executions since 1976, while the runner-up state, Virginia, has executed 113 prisoners.

Last December 10th in San Antonio, on Human Rights Day, Menjivar led a socially-distanced art walk from Blue Star Contemporary to Sala Diaz. Menjivar’s installation, DLP (2018), part of the group exhibition Please Form a Straight Line is on view through May 9 at Blue Star, while a companion solo exhibition, Birds, Rats, Roses, is at Sala Diaz until February 28.

Along the way, Menjivar played an audio recording of the Universal Declaration of Human Rights. Two articles stand out to Menjivar: Article 5, “No one shall be subjected to torture or to cruel, inhuman or degrading treatment or punishment,” and Article 29,“1. Everyone has duties to the community in which alone the free and full development of his personality is possible and 2. In the exercise of his rights and freedoms, everyone shall be subject only to such limitations as are determined by law solely for the purpose of securing due recognition and respect for the rights and freedoms of others and of meeting the just requirements of morality, public order, and the general welfare in a democratic society.”

The contract between the individual and the community is the space where Mark Menjivar focuses his recent efforts. As demonstrated over the last year, and most urgently at the Capitol this past week, people arrive in this gray zone with diverse views about where the rights of the state end and those of the individual begin. The limits are drawn by the responsibilities of freedom.

Menjivar’s artistic practice centers on a sophisticated, complex approach to social justice issues. He zeros in on a story, curating specific details that allow a potent narrative to emerge. Designing his art around the concept of “activating archives,” Menjivar opens up and makes accessible material that is normally stored away in boxes at an institution, something you have to sign in and present an ID to see. His art consists not just of objects, but exists as a conceptual structure that invites participation from viewers. Menjivar cites his mentor, artist Julie Ault, as one of his influences. Ault  co-founded the artist collective Group Material, which explored the relationship between art and aesthetics. Other influences include Georges Perec and Theaster Gates.

Both of Menjivar’s installations focus on capital punishment using David Lee Powell’s story as an example. Powell was convicted of murdering Austin police officer Ralph Ablanedo and sentenced to death in 1978 when he was 27 years old. He spent 32 years, the longest of any American, on death row, before he was executed in 2010 at the age of 59. During those three decades, he was tried and convicted three times. Ablanedo was the father of two young sons; uniformed policemen showed up at all of his trials and his execution.

“I’m working on his story because it’s both available and present,” says Menjivar, an Assistant Professor at the School of  Art and Design at Texas State University. The contents of Powell’s jail cell were gifted to the Texas After Violence Project (TAVP), an organization based in Austin, that archives oral histories in order to “shift narrative power to marginalized and oppressed communities and promote restorative and transformative justice.” Menjivar has an ongoing relationship with TAVP and currently serves as its artist in residence.

In DLP, Menjivar exhibits a photograph of seventeen storage boxes containing Powell’s possessions, juxtaposed with indexes listing the objects inside of each box. (See photo at top of this page.) A small rectangle taped on the floor marks the size of Powell’s jail cell. This concise, analytical presentation appears deceptively simple. Menjivar has also photographed the objects inside these seventeen boxes, but the paperwork, documents and correspondence form an onslaught of information that Menjivar continues to tackle. After making the archive public, people are mailing Menjivar even more information. 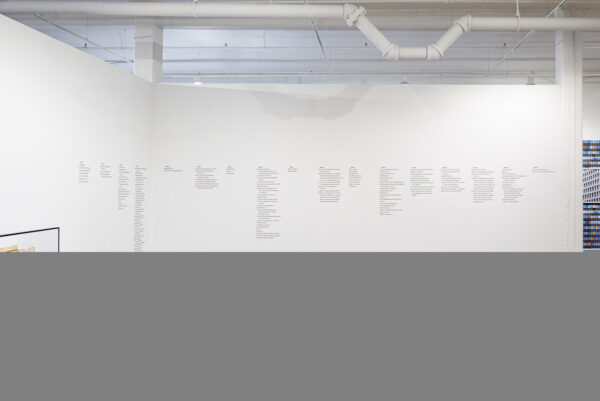 Menjivar was challenged with finding a responsible way to tell the complicated, tragic story of Powell, who was valedictorian of his class and in the honors program at the University of Texas but also suffered from mental illness and addiction. When he killed Ablanedo, Powell was accompanied by his girlfriend and they were both high on methamphetamines. There was even a question of who pulled the trigger, based on the policeman’s dying words: “that damned girl.”

The list of Powell’s personal belongings reads like a dystopic, poetic word game. How does one survive in a 6’ x 9’ room for 32 years? Pick from any box to contemplate how Powell served his time. Box 7 lists “long johns, towel, bed linens; Box 8 lists reading glasses, A Course in Miracles by The Foundation for Inner Peace, along with handkerchiefs and books on restorative justice. A chess board, Patti Smith’s writings, contact solution, shoelaces, and ranch dressing: the hard business of surviving, lifted by his pursuits of the mind. 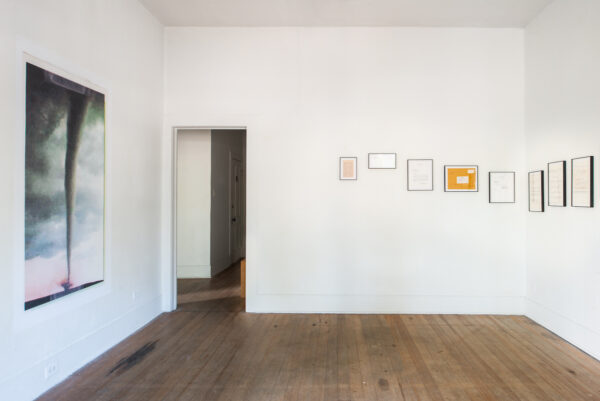 At Sala Diaz, viewers are greeted by a gigantic framed print of a tornado. Menjivar selected this image from Powell’s archives because such chaotic destruction accurately symbolizes the traumatic damage caused by violence and the consequence of capital punishment. The space is permeated by the sound of a piano playing, a recording of an original composition by Powell, recreated by San Antonio composer Richard Castillo. The notes form a “Palindromic, Invertible Canon,” a complex arrangement inspired by an article in Scientific American. During a court hearing, Powell had his composition played in a failed attempt to convince jurors that he could be rehabilitated and make contributions to society. Menjivar arranges the framed pages of Powell’s composition on the wall in a way that mirrors the note’s arrangement. 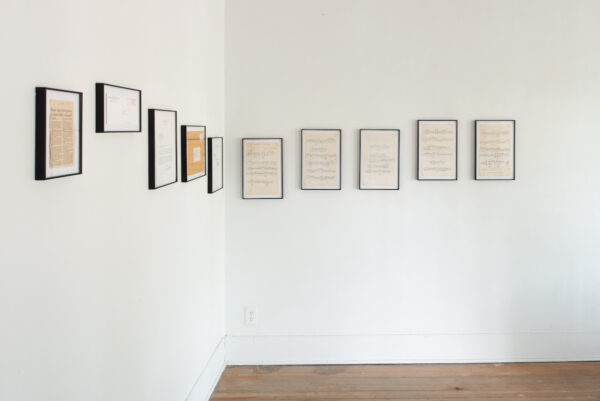 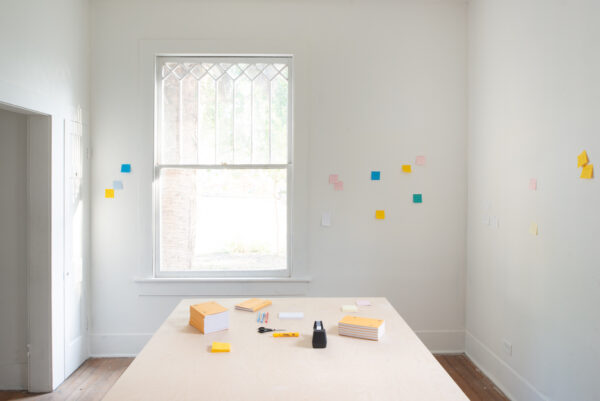 In another room, a large work table is stacked with Post-it notes and copies of the exhibit’s accompanying book. Menjivar distributes two copies of the book to every visitor — one to keep and one to give away. Visitors are encouraged to make their own reflections and post them on the wall. The fragments of information that Menjivar arranges in the book provide a glimpse into Powell’s mind. Toward the end of his life, he considered his death a political act. 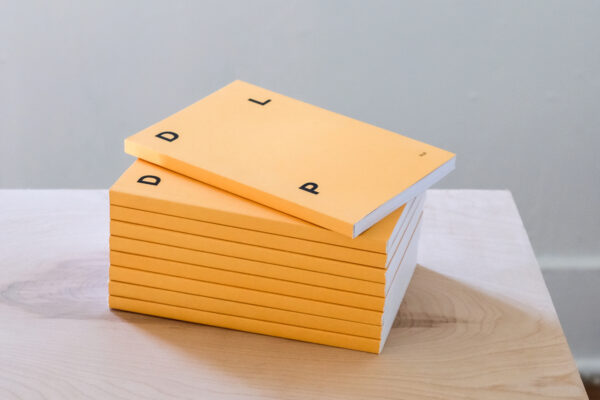 The book also includes photos of where Powell was jailed — first the Ellis Unit and then the Polunsky Unit, a Supermax prison outside of Huntsville. Other images include an AK-47, the type of gun he used to murder Ablanedo; a chess board mounted outside of cell; a cemetery; and a portrait of Powell himself. Menjivar has since discovered that several of the photos are by photographers Ken Light and Danny Lyon. He includes copies of their books, Texas Death Row and Conversations with the Dead, for review in the back room. A megaphone hangs on the back wall as tribute to Gloria Rubac, an activist who attends every execution in Huntsville, where she uses a megaphone to broadcast life stories about the person being executed.

At Powell’s execution, there were demonstrators on both sides, standing in the gray zone outside the Walls Unit in Huntsville. Rubac’s words were met with cheering by the 150 active and retired officers who showed up to witness justice being carried out.

In the back of his book, Menjivar asks, “Does an ‘eye for an eye’ ideology work? Where do the waves of trauma wash up on our shores? What are the economic, social and spiritual implications of an execution?”

One answer exists on a Post-it note found in Powell’s belongings, in the form of a list: “Birds, Rats, Roses,” a seemingly incongruous combination. Yet this fragmented refrain speaks of lost freedom, the debased experience of prison life, and a memorial of both Powell’s and Ablanedo’s deaths. Shaping meaning from the fragments of Powell’s life, Menjivar commemorates a life torn asunder by violence’s destructive force.

In San Antonio: ‘Please Form a Straight Line’ is at Blue Star Contemporary through May 9; ‘Birds, Rats, Roses’ is at Sala Diaz through February 28.