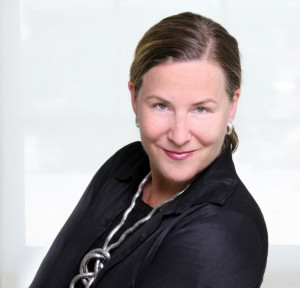 Maura Reilly, the new Executive Director of the Linda Pace Foundation, has been at the helm of the San Antonio foundation for three months now. Previously Chair of Art Theory at Griffith University in Australia, she has written many books and articles on contemporary art, and has held several curator posts in New York. Reilly was the founding curator of the Elizabeth A. Sackler Center for Feminist Art at the Brooklyn Museum, where she organized several exhibitions including the critically acclaimed Global Feminisms, co-curated with Linda Nochlin, the permanent re-installation of The Dinner Party by Judy Chicago, Ghada Amer: Love Has No End, Burning Down the House, among many others. We spoke recently about her plans for the Linda Pace Foundation, which include a new public exhibition space opening April, 2014. Below are excerpts from our conversation.

You’ve been here in San Antonio at the Foundation for just three months. What brought you here?

Well, for the past few years I have been living quite contently in Sydney with my partner, who is an Aussie. But when I was contacted by a headhunter about the position as executive director at the LPF, it gave me great pause. As someone who has dedicated much of her career to supporting the work of women as cultural producers—as artists, patrons, collectors—the opportunity was one I didn’t feel I could pass up. Linda Pace was an extraordinary woman who, with her founding of Artpace and the residency program, in particular, helped San Antonio gain international recognition as a hotbed of contemporary art. Before her untimely death in 2007, she also set up the Foundation in her name, which will not only secure her legacy as an artist, collector and patron, but it will also continue to attract international attention to San Antonio. I can think of no better professional position for me than to ensure that legacy. It’s a huge responsibility, but well worth it! Also, as a former Artpace resident, my partner Tracey loves San Antonio—so it was a great fit all around!

Are you working on any big changes yet?

Yes. The first priority is to get the permanent collection on public view as soon as possible. The second is to work with an architect to build a museum within a larger campus plan that will unite the various Foundation properties in/around Camp Street into a new arts precinct. But it will be at least four or five years before we can make that happen. As you know, right now we have the exhibitions at Linda’s apartment on the sixth floor of the Camp Street Lofts, but that is VIP access in a way. People need to make an appointment to see the exhibitions there; they are not open to the public on a regular basis. In the interim, what we plan to do is to create a more public space, accessible to all, with regular open hours.

Toward that end, we decided to transform the current offices next to CHRISpark on West Rische Street into a mini-exhibition space–we have about 2,000 square feet. For the first time in the history of the Foundation, we will be able to put the permanent collection on view for the general public. 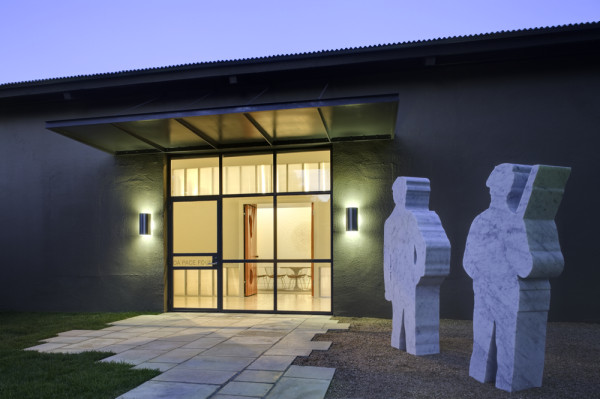 When will the new exhibition space open to the public?

The opening will coincide with Linda Pace’s birthday, April 17… We are working with Jim Poteet, who initially designed the space as Linda’s studio, and later as offices for the Foundation. He has redesigned it now as an exhibition space, so we are demolishing a lot of the walls, and opening it all up—it’s going to be pretty magnificent.

Will you commission public art for the outdoor areas by the new space?

Yes, we are going to commission a public sculpture next year, hopefully in time for the premier in April. We hope also to showcase a few other public artworks in the collection, as well—a Marina Abramovic and a lovely Ken Little piece. The hope too is that we will be able to commission and/or purchase works from future solo exhibitions that we present in the new space.

Have you decided on the programming schedule yet?

Yes. The first six months we will have highlights from the permanent collection. There are amazing artists in the collection! Teresita Fernandez, Rivane Neuenschwander, Franco Mondini-Ruiz, Hubbard/Birchler, Shahzia Sikander, Chuck Ramirez, Ross Bleckner, Glenn Ligon, Forest Bess, Wangechi Mutu, and so on. I believe that we may have one of the biggest collection of Isaac Julian in the world. It’s going to be difficult to choose what to pick for the first exhibition, to showcase the gems. The second exhibition, which will open in October 2014, will be a solo show dedicated to the work of Alejandro Diaz, who is one of my favorite artists, and who I’ve included in exhibitions since the early 2000s. Alejandro, who was born in San Antonio and now lives in NYC,  is the founder of Sala Diaz. He hasn’t had a solo exhibition here in over 20 years, so he’s really excited about it—as are we! 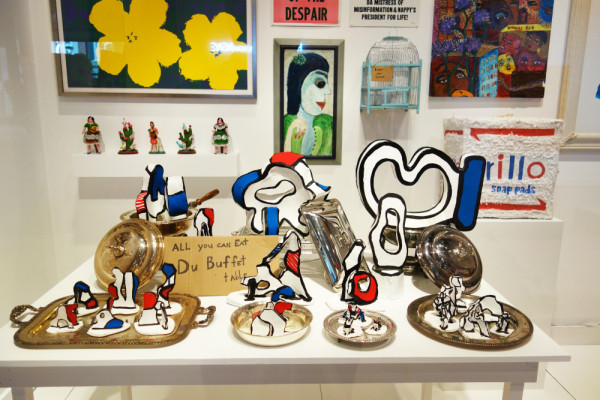 Alejandro Diaz, Diaz Art Foundation (installation detail), 2012. Mixed media installation including works by Diaz and other artists at the RISD Museum of Art. Photo courtesy of the artist.

Has the location for the new campus been chosen?

Yes. During Linda’s lifetime she purchased several pieces of property in/around Camp Street—all of which will be part of the new Pace arts precinct. The campus will feature a museum dedicated to the permanent collection, which will be adjacent to San Pedro Creek, as well as a temporary exhibition space, and other fun surprises. The gorgeous landscaping aesthetic of CHRISpark will also be extended throughout the precinct, creating a lush, green-filled environment. It will be amazing—and an extraordinary addition to the already vibrant San Antonio art scene. 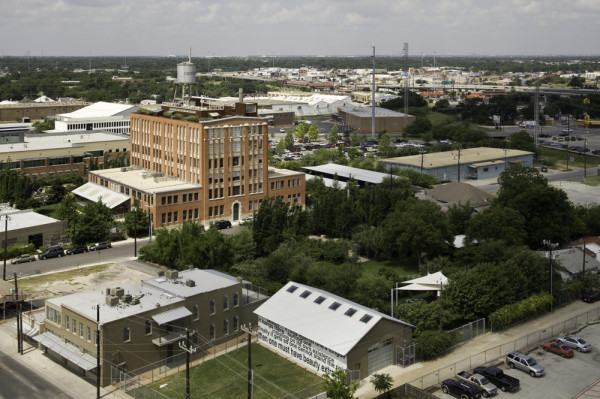 Have you put out a Request for Proposals for the campus project?

No, we haven’t. But Linda did a lot of research before she died, and really thought through it at great length and had been buying property for this project. We are trying to realize that dream. There are other priorities, too–to acquire works, to support the residency program at Artpace, and so on.

A lot of people ask, “What is the difference between the Foundation and Artpace?” I always say, “producing–collecting.” Artpace produces, we collect. Artpace is a brilliant hotbed of contemporary art ideas, they are constantly producing amazing work, and now … what we are trying do is acquire some canonical works that were created there that we may missed along the way. One of the most important ones is the Felix Gonzalez-Torres piece he made at Artpace. For some reason, it slipped between the cracks. It was purchased in 1994, and is now worth $7 million. We ain’t gonna buy that! But there are others of equal importance that we will be looking at. Our acquisition strategy is very much linked to the history and future of Artpace.

For the past few years, we have focused on some strategic acquisitions, which are all related to Artpace, like a beautiful Lorraine O’Grady suite of photographs, a big installation of Cornelia Parker—both of whom are former Artpace residents. Also, a few weeks ago, the board approved the purchase of two major works by former Artpace resident Shahzia Sikander—one is a huge and complex three-channel projection, titled Parallax, which Sikander created for this year’s Sharjah Biennial; and the other is a work titled Last Post, from 2010, which she recently showed at the Foundation. 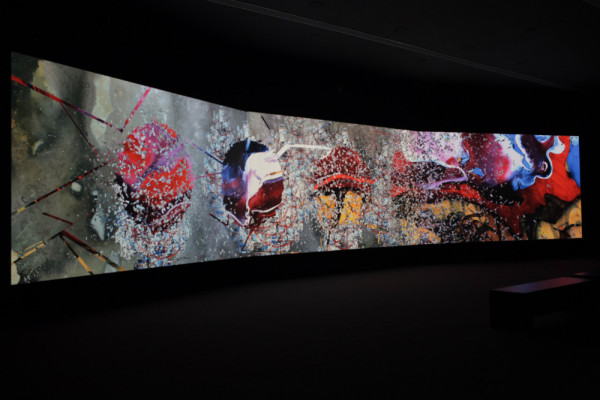 Knowing that we will soon have a public museum, what we’re trying to push forward are real museum-scale and quality works. I think we can start moving in that direction now because we can envision a space–which is not to say that the other works in the collection are not museum quality, it’s just that many of them they were purchase with the intention of being shown in a residence. So, we are trying to think in different ways.

Is there a specific Texas artist acquisition plan?

I am currently working with the LPF acquisition committee to rewrite what our philosophy and policy will be. One of the major criteria for Linda was artists from Texas. Another one was Artpace artists (and they didn’t necessarily have to be the same), another was collecting artists in depth–and collecting art stars, people who were not even associated with Artpace, like Doris Salcedo, Gerhard Richter, and Rachel Whiteread. Like every private collection, it’s an eclectic, highly personalized collection, but it is really, really interesting.

Will you be curating all the exhibitions in the temporary exhibition space?

Yes, unless we invite a guest curator, which I would like to do as well. I would like to open it up to curatorial proposals. We want it to be like a project space–but again, it’s about collecting, not producing. So, if we commission someone, we would do it with the end result of acquiring work; with everything rooted in a strict acquisition policy.

Will you be writing anything in the foreseeable future?

I’m always writing! Currently, I am editing a volume of academic writings by Linda Nochlin, who was my PhD advisor, and now a dear friend. Nochlin is the preeminent feminist art historian and she’s been writing texts since the late 1960s. Her most famous and canonical text is “Why Have There Been No Great Women Artists?”—which was hugely influential on my thinking. I’m also writing a book called Curatorial Activism and Ethical Responsibility, which examines the history of counter-hegemonic curatorial practices, beginning with Jean-Hubert Martin’s Magiciens de la terre in 1989 on through to the present.

How museum-like will the new exhibition space be? Will you have docents?

No! It’s so small! It’s tiny! We’ll just have a small desk at the door, with one security guard. It will be like a contemporary art gallery where you can’t buy anything–a Chelsea gallery without a price list. Another thing we are doing is developing a new website, I’m working with our collections and exhibitions officer, Kelly O’Connor, to develop an online database of the collection. We are starting with documenting 50 objects, which should be online by the time the exhibition space opens next April; then we’ll follow up with more sections of 50 each. We will also be videotaping many of the artists in the collection–giving them a space to talk about the work, or about their experiences working with Linda or Artpace–whatever they want. The website will be a multi-layered presentation, so people can start seeing what is in the collection, and institutions can learn what we have for possible loan. A big part of my job is to get the collection in public view–and the web is public. So, the sooner we can get the collection online, the better.