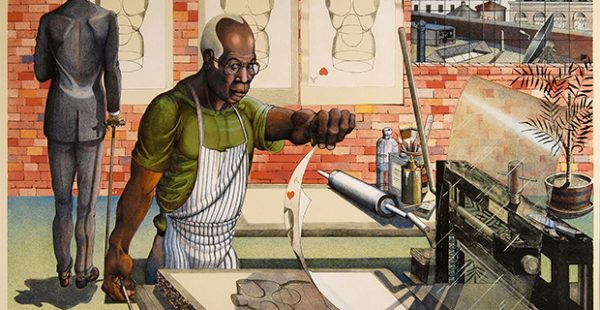 “The Harmon and Harriet Kelley Collection of African American Art: Works on Paper exhibition is one of the most comprehensive traveling exhibitions ever organized featuring works on paper by African American artists from the 19th, 20th, and 21st centuries. The 85 works in the exhibition include drawings, etchings, lithographs, watercolors, pastels, acrylics, gouaches, linoleum cuts and color screenprints by such noted artists as Ron Adams, Benny Andrews, Romare Bearden, Aaron Douglas, Jacob Lawrence, Charles White, Elizabeth Catlett, John Biggers, Henry Ossawa Tanner, Eldizer Cortor, Margaret Burroughs, and many other outstanding lesser known artists. They are a small fraction of the Kelley’s large collection that reads like a ‘Who’s Who’ of the masters of late l9th- and 20th-century African-American art. Esteemed art historian, David Driskell, Professor Emeritus at the University of Maryland at College Park, calls the Kelley Collection ‘one of the finest that has been assembled tracing the history of African American art.’ The works on paper that were gleaned from the Kelley Collection for this exhibition provide a rare opportunity for the public to view master graphics spanning three centuries of African American art.

“Dr. Harmon Kelley, an obstetrician-gynecologist residing in San Antonio, TX, and his insightful wife, Harriet, a college-trained biologist, were inspired to begin collecting after viewing an exhibition of African American art at the San Antonio Museum of Art, where they did not recognize any of the artists’ names. Feeling a sense of cultural isolation, they vowed to educate themselves about this unknown aspect of their heritage. They also wanted to ensure that their two young daughters would become aware of the artistic achievements of African Americans. The Kelleys could not have imagined initially that their budding art collection would become the fabric of any museum’s dreams, that it would overflow their three-story Neo-Georgian home and travel to major venues in the United States and abroad. Their younger daughter and advisor from early on is a Spelman College-trained art historian who serves as curator of the collection and will advance this remarkable legacy to the next generation and beyond.

“The exhibition was organized by Landau Traveling Exhibitions of Los Angeles, CA.”