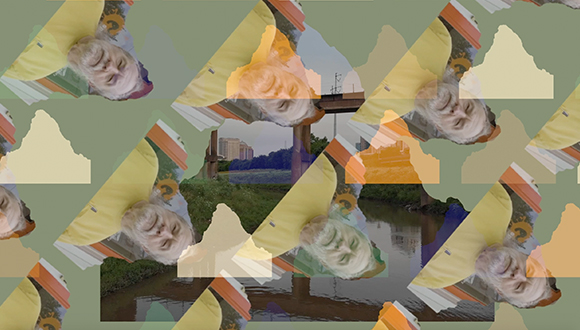 “In 1956 Walt Disney was on vacation in Switzerland, overseeing the production of his film, Third Man on the Mountain. Smitten with the Alpine landscape, Disney bought a postcard of the iconic Matterhorn peak and sent it back to his engineers with the command, ‘Build this.’

In 2018 David Politzer was visiting Disneyland, overseeing his daughter’s birthday festivities and the general merriment of his family. Smitten with Disney’s simulated Alpine landscape at the Matterhorn Bobsled attraction and the exaggerated lean of the distinctive mountain peak, Politzer photographed the iconic imitation, asking, ‘Build this?’

Politzer used this photograph as a basis for Wönderhorn, a new series of paper collages. Initially, the artist challenged himself to use only the silhouette of the Matterhorn made from his 2018 photograph. The artist found satisfaction in exploring and pushing this boundary but eventually grew restless. He then looked to traditional Swiss paper cutting techniques and stills from Third Man… for further stimulus. In the resulting works, we see Disney’s Matterhorn variously chopped, penetrated and put on a pedestal. The characters in Third Man… look on, garlanded by filigree. The result is a meditation on environmentalism, simulacra and hubris.”