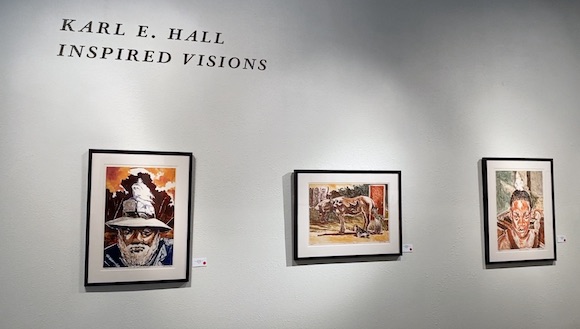 “Karl E. Hall is best known as a painter and printmaker, active since the 1970s, and the exhibition includes painterly portraits and compositions relating to Hall’s brand of ‘Gospel Surrealism.'”

“Born in 1952, artist Hall grew up in the Sunnyside community in Houston, TX, and graduated in 1970 from E.E.Worthing High School. In 1976, Hall went on to earn a BA in Arts Education from Texas Southern University, where he studied drawing and painting under the late Dr. John T. Biggers. In 1979, he completed his MFA at University of Houston Clear Lake, studying painting and monotypes with Professor Sandria Hu.

“After graduation, Hall served for 33 years as an Art Educator, first in North Forest Independent School District, followed by Galena Park Independent School District, where he retired in 2011. During his teaching career, he received numerous awards and accolades, in addition to the honor of many prize-winning students. Hall retired from the school system to pursue his dream of being a full-time artist or whatever God calls him to be. Painting in a style he refers to as ‘Gospel Surrealism’, Hall is a devout believer in God, and is currently a member of the Apostolic Assembly of Love church under the ministry of Bishop Louis Osborne and Sis. Gwen Osborne.

“Throughout his career, Hall has won many prizes in juried art competitions and participated in numerous group shows. Works by Hall are published in the following books: Black Art in Houston by John Biggers, Carroll Simms, and John Edward Weems (1978); Art in Action by Guy Hubbard (1987); and Roots for Life by Roy L. Ford (2017). Hall is also one of 31 artists chosen to create illustrations for a Texas State Parks book, to be released in 2023, for the centennial anniversary of the State Park System. Corresponding with the book release will be an exhibition at the Bullock Texas State History Museum in Austin, Texas featuring the artist’s original works.

“Today, he continues to reside in Houston, and is an active member of the Watercolor Society of Houston where he also exhibits works. Like his mentors at TSU, Hall has spent a lifetime inspiring future generations of artists through his work as an educator.”