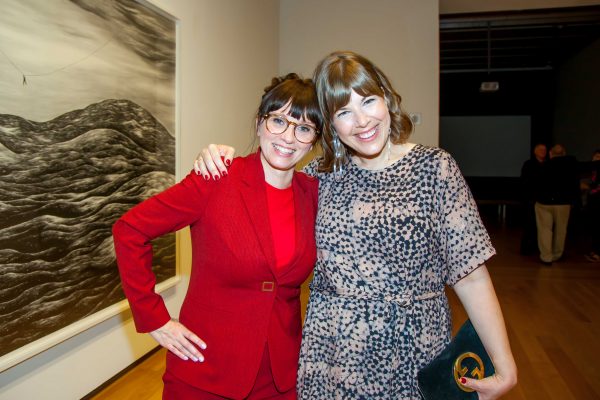 Los Angeles-based artist Robyn O’Neil is known for her large-scale graphite drawings of small male figures in Hieronymus Bosch-esque situations. Robyn O’Neil: WE, THE MASSES, a 20-year survey of her work organized by The Modern Art Museum of Fort Worth, is on view at the museum through February 9, 2020. If you’re interested in learning more about O’Neil, you can also listen to Glasstire’s podcast interview with her, and read a recent review of her exhibition.

What is your greatest extravagance? A lot of yarn from Jo-Ann fabrics. Which is cheap actually, so nothing.

What is the trait you most deplore in yourself? Oh god, so many things. Probably my need for others to like me. Which is lessening every day.

What is the trait you most deplore in others? Pretentiousness. And I’m not into cold people.

What is your current state of mind? Happier than I’ve ever been.

Which words or phrases do you most overuse? “OBSESSED.”

Where would you most like to live? Exactly where I live right now. The North Puget Sound.

Best art show you’ve seen in the last 12 months? I honestly can’t think of one, but I did go to The Prado for the first time, so how about every single thing in that museum?

If you could own only one work of art (but it could be any), what would it be? It’s an early Mondrian landscape called The Red Cloud, 1907.

Installation view of Robyn O’Neil: WE, THE MASSES at The Modern Art Museum of Fort Worth

Robyn O’Neil was born in Omaha, Nebraska, spent her formative years in Texas, and currently lives in Los Angeles. She received a BFA from Texas A&M University–Commerce in 2000 and attended graduate school at the University of Illinois at Chicago. In 2003, she was a resident at Artpace, San Antonio, and her work was included in the 2004 Biennial at the Whitney Museum of American Art, New York. She is the recipient of numerous grants and awards, including a Joan Mitchell Foundation Grant, an Artadia grant, and the Hunting Prize, and she received a grant from the Irish Film Board for a film written and art directed by her entitled WE, THE MASSES, 2011, which was conceived of at Werner Herzog’s Rogue Film School.

She has shown extensively, with solo exhibitions at acclaimed museums, and her work is part of many public collections. She also hosts the weekly podcast ME READING STUFF.