Last month, the Modern Art Museum of Fort Worth opened Modern Masters: A Tribute to Anne Windfohr Marion. Curated by the now-retired Michael Auping, the exhibition reflects on the legacy of the local philanthropist and art patron who helped shape the institution. It’s also an opportunity for the museum to revisit its permanent collection (which it does from time to time, in various museum-wide surveys), and present it through a new lens. This current iteration showcases familiar works in new spaces, putting them in fresh contexts and conversations with each other, creating opportunities for repeat and first-time visitors to come away with new understandings.

While it is easy to get lost in the excitement of a newly acquired and brightly colored Ellsworth Kelly or a triptych of Carrie Mae Weems photographs from her iconic Kitchen Table series, I was drawn to the show’s small room of works by Agnes Martin. From a distance the subtlety of her work fades into a gray haze on canvas, so much that I wouldn’t begrudge a visitor for dismissing the room and passing over it. This is the norm rather than the exception, as museum visitors spend an average of thirty-three seconds looking at a single work of art. 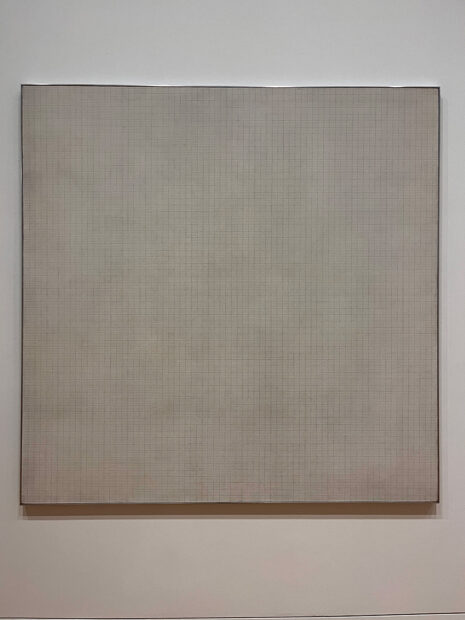 The subtlety of Martin’s style forces me to look closer to absorb its details and complexity. As a self-described math nerd, I’ve always been drawn to Martin’s spreadsheet-like pieces, though in the time she created this work it would perhaps be more accurately described as a loose-leaf ledger page. The evenly spaced vertical and horizontal lines evoke a sense of calm and order. And while the repetition of line and space are meditative, there is an obsessive quality to her work, hinting at a deeper underlying stress. 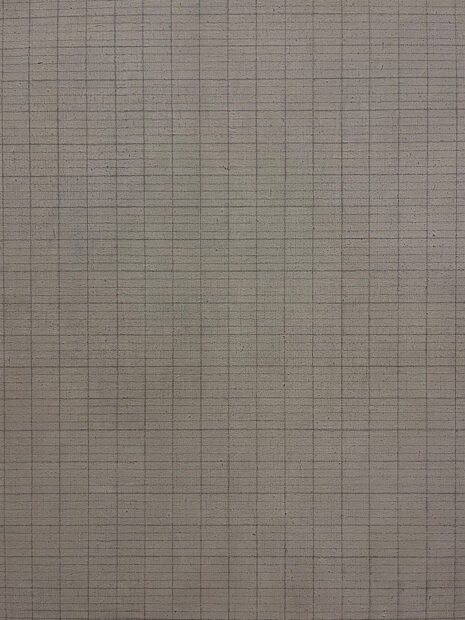 From a short distance, Martin’s lines look mechanical, but stepping closer reveals the imperfection and humanity of her marks. Her purposeful pencil lines highlight the inherent texture and blemishes of the surface as they tumble over random small bumps of excess gesso. This awareness of the natural flaws in Martin’s paintings reveals her vulnerability and brings to mind a quote by the artist (shared by the museum in a long-form label, which, historically, it has shied away from): “Simplicity is never simple. It’s the hardest thing to achieve…”

While exploring a singular piece by Martin is satisfying, what makes this installation unique is the dialogue between the works (three large-scale paintings and a print series) which span decades and have not been shown together before at the Modern. The oldest painting in this exhibition, Leaf, is from Martin’s early explorations of line on canvas. Two years after creating it, at the height of her career, she moved to Taos, New Mexico, where she had lived earlier in her life. This self-imposed isolation from 1967 to 1974 allowed Martin to step away from painting and focus on writing and meditation. 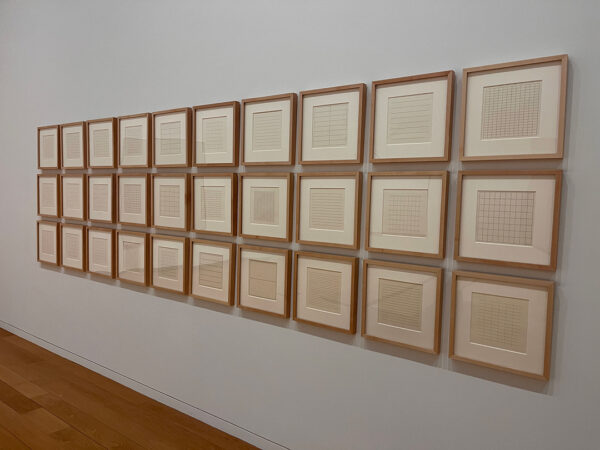 In 1971, Martin was invited by Luitpold Domberger, a German printmaker, to make a print portfolio, which would ultimately take her two years to complete. The end result was On a Clear Day, a set of 30 square screenprints exploring lines and the division of space. Silkscreen allowed Martin a precision that was impossible in her paintings. Each print is the same size and uses the same thickness of line, but divides the space differently through various arrangements of dense or sparse vertical and/or horizontal lines. Additionally, some of these prints experiment with open-ended grids that are not constrained by an outline. There does not appear to be a clear progression in the works, but the apparent randomness of the installation provokes the viewer to consider the relationships between the pieces — like a puzzle that needs to be solved. Overall, the works still echo Martin’s sense of obsession, but hung together they also come across as playful studies created during a time of renewal. 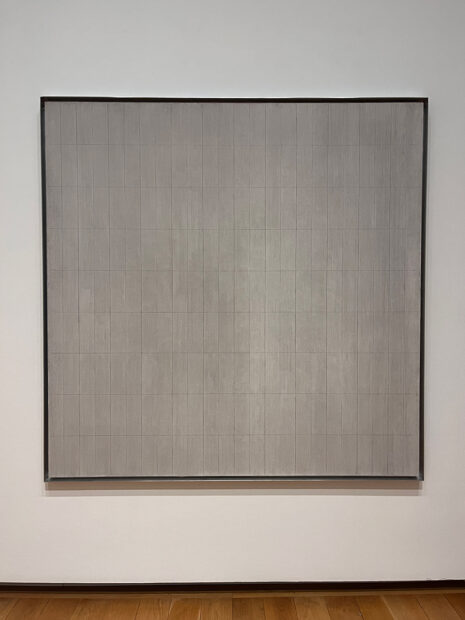 Agnes Martin, “Untitled,” 1977, India ink, graphite, and gesso on canvas. The Modern Art Museum of Fort Worth. Gift of Anne and John Marion.

Martin returned to painting in 1974, resuming her practice with a slightly shifted style. The larger grid and vertical orientation of the rectangles in Untitled (1977) are reminiscent of one of the On a Clear Day prints. Though still filled with controlled lines, the increased size of the rectangles makes the piece feel less confined. The painting also, through its standard grayscale background, serves as a transition piece in her oeuvre — a blending of former and new techniques, marking both her past and future ideas. In the late 70s, Martin began to incorporate shades of blue into her work, which is reflected in her most recent work in the Modern’s collection, Untitled XVI, painted in 1996. With only seven rectangles taking up the same size canvas as Leaf’s incalculable number of rectangles and Untitled’s 216 rectangles, this work continues to expand the size of the grid, removing focus from the lines and instead highlighting the space between them. 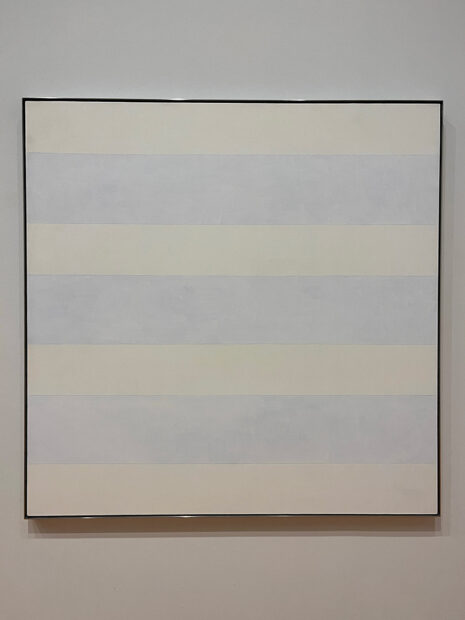 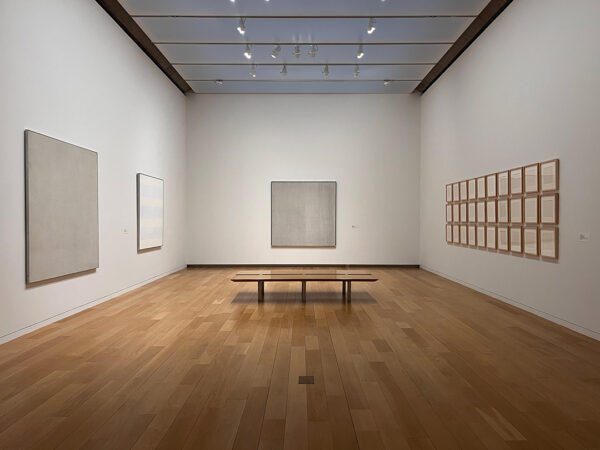 Works by Agnes Martin on view at the Modern Art Museum of Fort Worth.

Sitting in this room and taking in the shifts of Martin’s work over the decades is like watching an artist let go and create space to breathe. I am captivated by the dedication that goes into Martin’s early tight and tiny rectangles, but the large swathes of her later work are comforting in the way that a wide open sky reminds me of my small place in a universe that stretches beyond my comprehension. Ultimately, there’s a time and place for both: small, cell-like meticulous worlds to get lost in when focus is the aim, and large expanses of space, open to the elements, to whatever comes next, and to the future.

Modern Masters: A Tribute to Anne Windfohr Marion is on view at the Modern Art Museum of Fort Worth through January 8, 2023.

Fleshing Out the Canon: “Women Painting Women” at...