The Deep Dark Waters Overcome Us: Robyn O’Neil’s “WE, THE MASSES” 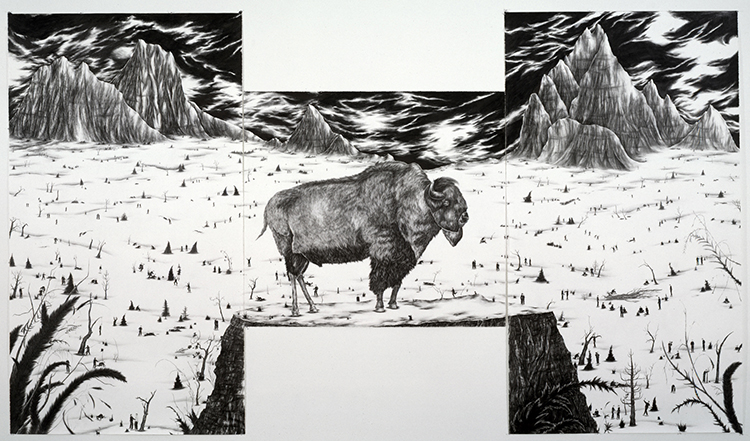 Robyn O’Neil, As Ye the sinister creep and feign, those once held become those now slain., 2004. Graphite on paper. Overall: 92 1/2 × 166 in. Elyse and Lawrence B. Benenson Collection.

Mountains, big skies, ominous seas, and massive beasts: nature is an overpowering presence in the land and seascapes of Robyn O’Neil’s WE, THE MASSES at the Modern Art Museum of Fort Worth. But an equally omnipresent element in O’Neil’s drawings from this retrospective show are hundreds and thousands of little guys in black track suits, engaged in everything from mindless assembly to vulgar actions whose “violent delights have violent ends.” If Dolores from HBO’s Westworld was looking out over an O’Neil scene, she could easily apply her Shakespearean take on the destruction that is meted out in the artist’s dystopia.

O’Neil’s population of men — devoid of women and children, and thus doomed to end with the last man — personify a state of incessant destruction brought upon the world by a horde of automatons hell-bent on a futile yet predictable aspiration to conquer nature. This quest would be quixotic and even charming were it not hurtling us towards the end of everything. But O’Neil is neither Noah nor Cassandra. Her pictures aren’t meant to warn us or save us. She is, rather, quite zen about us getting what we’ve got comin’.

Robyn O’Neil, These final hours embrace at last; this is our ending, this is our past., 2007. Graphite on paper. 83 × 166 3/4 inches. Collection of the Modern Art Museum of Fort Worth, Gift of Marshall R. Young Oil Co. in Honor of George Marshall Young, Sr., Chairman.

The codex of symbols in MASSES are steeped in mysticism and there seems to be a secret handshake that O’Neil shares with  cults and secret societies — there is some Eyes Wide Shut, Illumanti shit going down in these drawings. Primal elements like earth, water, and fire are embedded in bleak landscapes. 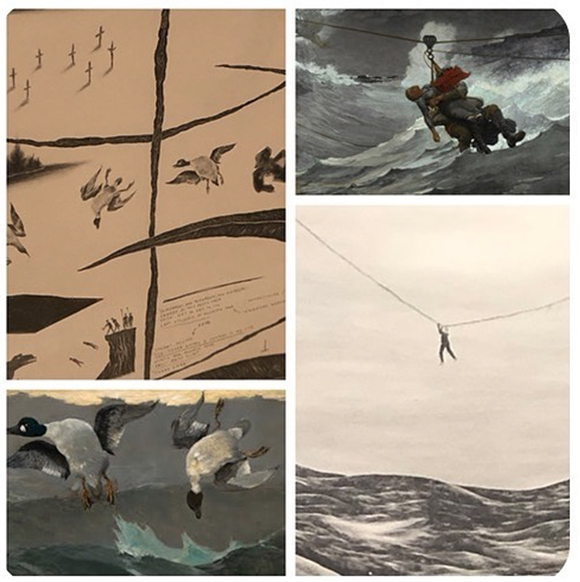 In an Instagram post that features some O’Neil imagery, @Magadler wrote “Somebody’s a Homer fan.” I could add that O’Neil is also a Kiefer fan, and a Blake fan, and a Turner fan, and on and on. MASSES is O’Neil’s we’re-all-gonna-die train, with no redemptive pressure valves. Our fates are sealed. There is no collective healing for these masses. We are, each one of us, hanging from a wire above the tsunami. And we will fall in. And we will die.

O’Neil embraces the tsunami, and her surrender is neither sacrifice nor atonement; it’s an acknowledgement of our collective guilt. A penance, maybe. If her Catholic upbringing casts a shadow over the works in MASSES,  it’s that her landscapes are a vast purgatory — one where there is never enough prayer or supplication, nor saints who could intercede to get the collective camel of humanity through the eye of the needle. 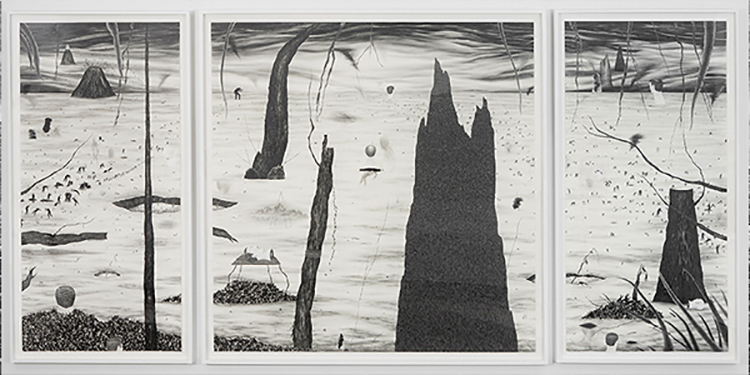 Hell, from 2011, descends deep into the Hades of Bosch or Dante, and in these depths finds a way to convey all the fruits of our violent delights while sparing us, at least, the gore of the making. This hell isn’t scary due to depictions of torture or pits of fire, or any real sense of physical pain. It is, instead, a terrifying eternity of Mondays with a least favorite co-worker. All about there are tornados, and the stench of 65,000 men sweating balls in hell. 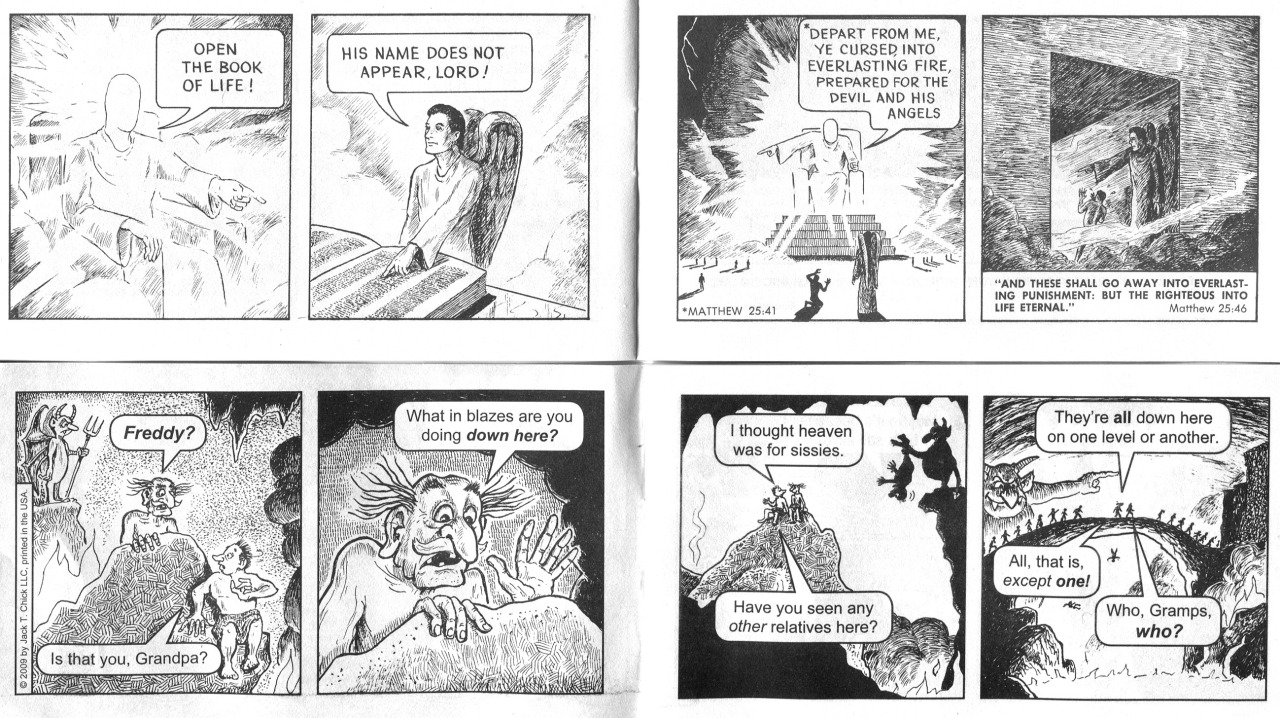 Nothing in the Jack Chick bible tracts from my childhood that warned me about hell appear in O’Neil’s drawings, but her work evokes the same degree of dread that kept my hands out of the cookie jar. Chick’s gloomy black-and-white moral propaganda reveled in graphic detail, even for the 1970s and ’80s wages of sin. Wild beasts tore at limbs, sadistic minions walked unwilling souls to the guillotine, and God’s wrath literally poured down from the heavens. 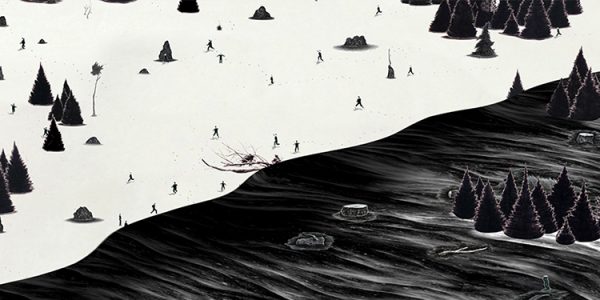 More recently, beyond the destruction and doom, O’Neil crawls out of this hell of her own making and finds an island of color, if only for a moment. It isn’t the color of blue skies and happy endings, but a kind of Chernobyl glow that can kill you, even though you think it’s beautiful in the moment. And as humanity (and O’Neil) illustrates in our reaction to disaster, we would (it seems) rather die in our defiance and condemn thousands more to death and whole regions to centuries of plague than to change course. 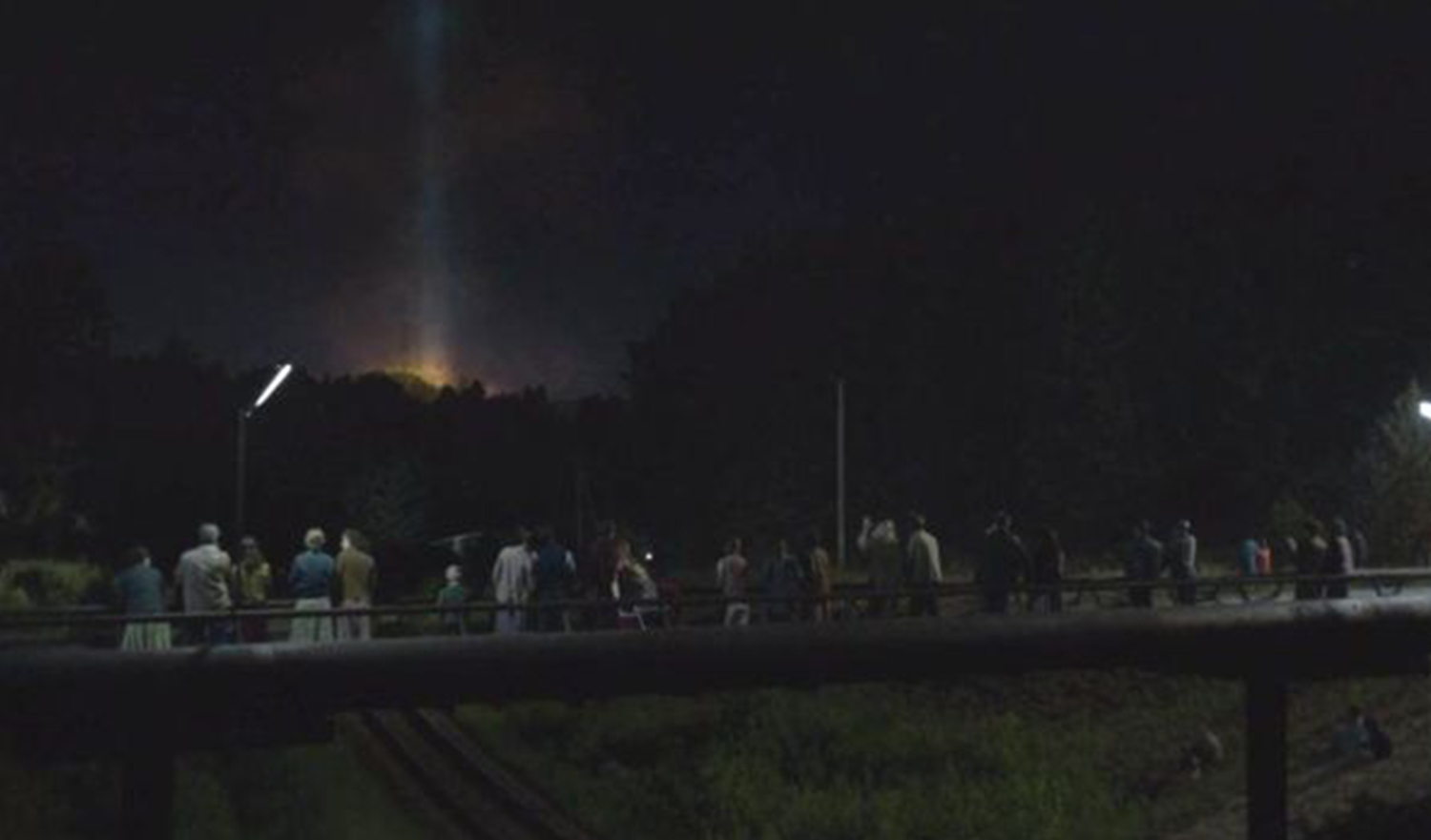 Color peeks out of an unkindness of ravens, gathered around a spiraling sun and red sky in An Unkindness, O’Neil’s 2019 graphite and colored pencil drawing. To the left of the ravens in this three-panel altarpiece is a pack of snarling wolves, and to the right, a parched landscape with a huge dark wave in the foreground, devoid of life, or men.

O’Neil’s men wander barren landscapes, but not this one. They’ve ignored their self-inflicted misery and destroyed themselves. The deep, dark waters will overcome us all.