Vernon Fisher is one of the more important contemporary artists that Texas lays claim to. He’s known for conceptual, multimedia works dating back to the 70s that combine painting, sculpture and text. And he is my dad’s exact age. Robyn O’Neil is roughly my age, has Texas on her resume, and has made waves of her own over the past decade or so with her epic, narrative drawings. Although presented by Dallas’ Talley Dunn Gallery as two separate exhibitions, I looked through the five new paintings by Fisher and the slew of new drawings by O’Neil and found enough interesting connections to do a good old-fashioned compare and contrast. 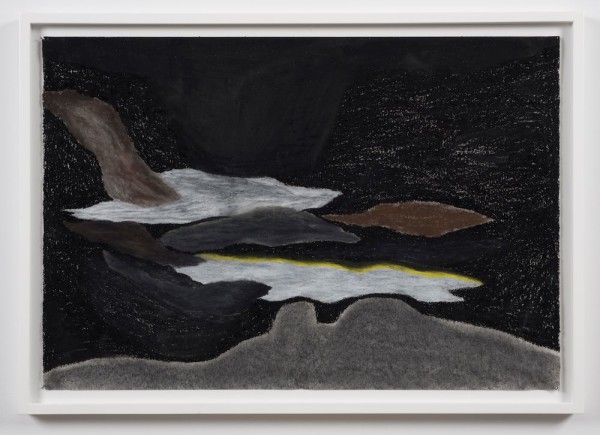 First off, it’s worth noting that this show marks a drastic change in O’Neil’s work. These new drawings are smaller and simpler in subject matter and introduce color pastel to her trademark mechanical pencil. Her earlier, large scale works felt vast and immersive, invoking Henry Darger by populating her apocalyptic environments with little men in track suits to battle out the last days. In these new drawings, she has either ticked the clock forward or turned it way back. There are no figures or animals and only a handful of lonely trees. The landscape has reverted to primordial elements: sky, earth, light, water, and fire, all pregnant with strangeness and mystery. They trade in Darger for the clunky, mystic Forrest Bess. What hasn’t changed is that the spaces of her work are still generated between imagination and the simple magic of “pencil” on paper. 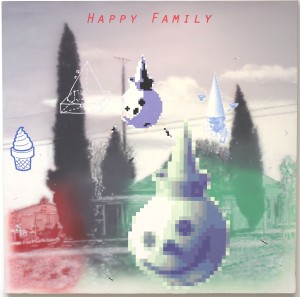 Fisher’s landscapes, on the other hand, are photo-based. All the paintings begin with a hazy, black and white backdrop image of power lines, shrubbery and someone’s childhood home or an old mini-golf structure. This image is like wallpaper—the kind on your computer screen rather than on the walls of that childhood home. It holds the space of the painting together and serves as an atmospheric sketchpad for Fisher’s doodles and cut-and-pasted icons (the 21st century meaning of cut-and-paste), sourced from pop media past and present. It’s about layers (the Photoshop variety), and a shallow virtual space created between each flat element. We aren’t allowed into the deeper space of the photograph. Everything is trapped in its own medium, becoming surfaces rather than windows. 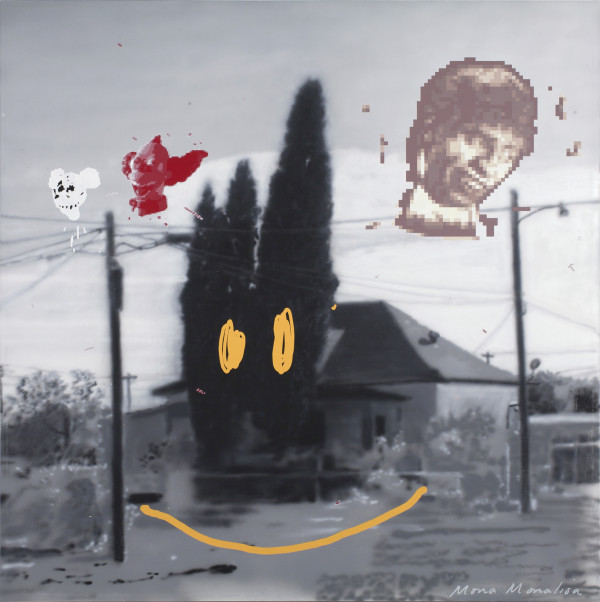 In Fisher’s piece Mona Monalisa, the head of Krusty the Clown floats alongside a sinister Mickey Mouse and what could either be Mick Jagger or Dracula, all flashing their pearly whites. Fisher riffs on a simple theme to make subtle and overt visual connections that span decades. The thing about the 21st century is that past and present have been flattened, converted into code, and exist all together in the internet. Here, Fisher dredges them up as awkwardly pixelated scraps of data, in various stages of digital decay, and leaves us to negotiate what any of it means in relation to what it may have originally meant. 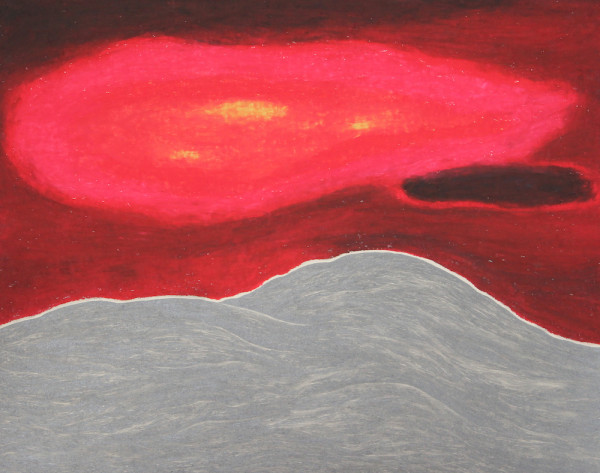 The younger O’Neil also forces together starkly different elements, but she uses the pre-Microsoft version of cut-and-paste. In The Sky in Kerala, a barren hillside rendered in graphite sits under a nebulous red sky done in oil pastel. The pastel is applied crudely and roughs up the paper into flecks and fuzzies. Its actual texture is paired with the delicately drawn texture of the hills and rocks. The color and temperature clash with the silver-gray earth. These are two different cosmoses with their own rules for how forces of nature work. And they’re leveraged against each other to cast doubt and an eerie light onto the whole picture. 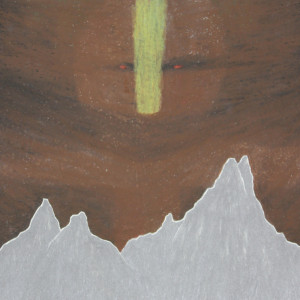 This same collision is found in many of these works such as Red Sky and The Watcher, where jagged, churning earth meets an alien sky. The way each space is illustrated has everything to do with what it is able to depict. It seems as if O’Neil is confronting her own style, its limitations and its substance. She is asking big questions.

Fisher’s paintings reflect an open and intuitive process, but for the most part are mechanical in their execution. As freewheeling as the compositions seem, their translation into paint is meticulous and precise. What look like accidents or noise are actually careful representations of accidents or noise. Their presence in the painting is as intentional as anything else. Fisher screens all of the ghosts that make it into the machine. 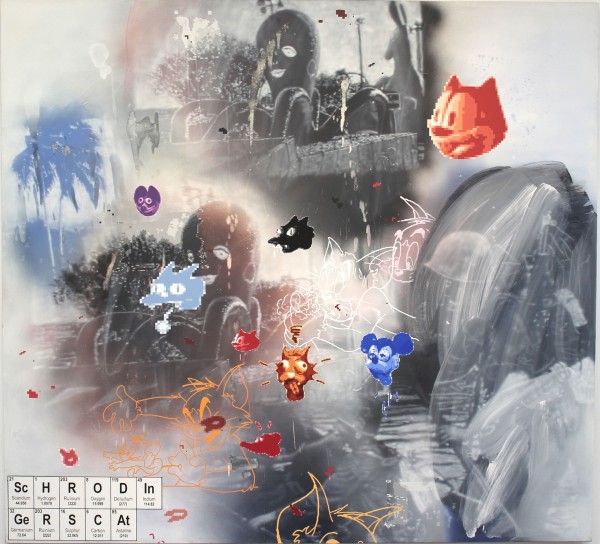 Though both artists are working in traditional formats, the differences in their work speak to the concerns of their respective generations. It seems fitting that Fisher’s work makes such a point to deal with the pictorial ramifications that the avalanche of technology has dropped on us. It continues in the line of Pop Art reasoning that artists of his generation worked through. He’s still asking questions that probe the chinks in our collective imagination, the bricks and mortar of our visual culture. And I suppose it’s symptomatic of O’Neil, as representative of the next generation of artists, to sidestep that problem and return to a more primitive relationship with pictures. Perhaps by turning inward, she’s searching for the cracks in her own imagination. Perhaps those of us who grew up with virtual versions of our environment are hungry to rediscover the richness of the physical world in its own right.

All images courtesy of the artists and Talley Dunn Gallery.