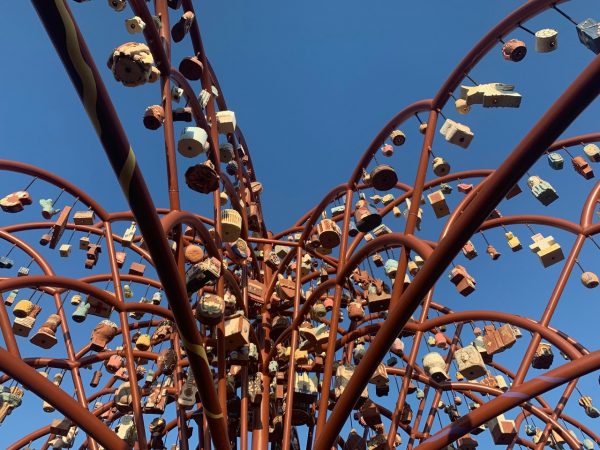 Cabrera, Art League Houston’s 2019 artist of the year, began the epic project in 2017 with a series of public charlas (chats) for the comminuty to share their histories and stories of San Antonio. Cabrera then lead ceramics workshops for participants to sculpt their stories into ceramic pieces.

Via Talley Dunn Gallery, Dallas: “The project was commissioned by the San Antonio River Foundation, as part of a larger program of public sculpture along the Mission Reach portion of the River Walk.” 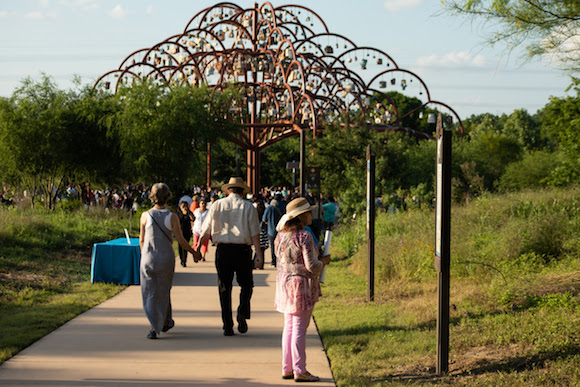 Currently based in San Antonio, Cabrera was born in Monterrey, Mexico and moved with her family to Texas when she was ten years old. Cabrera went on to study at the Maryland Institute College of Art and then earned BFA and MFA degrees from Hunter College of the City University of New York. She has been actively exhibiting since the 1990s, with recent exhibitions at Ruiz-Healy Art, Blue Star Contemporary, Southwest School of Art, and the Dallas Contemporary.

In a recent interview with Glasstire, Cabrera described her work:

“My art practice aligns with others working with socially engaged art in community. It empowers individual communities to define their place and voice in the social and cultural dialogues evolving within their communities. My art bridges contemporary art practices with traditional craft processes, allowing participating communities to reclaim, preserve, and innovate their traditions.”

Looking forward to seeing in person in July!

It was an awesome experience to make one of the pieces. I never in my wildest dreams would’ve thought I’d do something like this . Thank you for your vision Margarita