by Christina Rees May 24, 2015
FacebookTwitterEmail 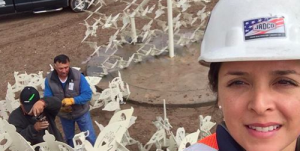 This story is getting weirder by the day. The artist Margarita Cabrera makes a public work for the city of El Paso according to plan, the city (or someone at the top of it) decides that the gun parts used as a motif in the sculpture are unacceptable even though the design was fully approved beforehand, and then the sculpture is cut apart and taken down while Cabrera wasn’t in town. Censorship? And if the city never formally accepted the finished piece, the piece still legally belongs to the artist.

Today a press release from the studio of Margarita Cabrera made it clear that despite her many attempts to retrieve the commissioned artwork, titled Uplift, El Paso is not cooperating. Cabrera does not know where the sculpture is or what condition it’s in.

If you’ve been following this strange tale here and here, you know that the artist suspects that the artwork was damaged beyond repair or recognition when the city swooped in to remove it. Cabrera says that city has never been clear with her about how they can justify breaking its end of the contract over the artwork considering the design of the project was approved at all stages.

El Paso is, by Cabrera’s accounts, claiming that it owns the artwork now (though it will not reinstall it) and that it will pay Cabrera the agreed-upon original fee of $70,000. Cabrera has acquired legal counsel since April.

She wants the work back, not “go-away” money.

If the client paid for the work, the artist no longer controls it. While it’s a shame the rest of us don’t get to see it, I don’t ee that the artist has any legal recourse. I do, however, find the current illogical fear of guns and even gun parts hysterical.

This is not the case. The Visual Arts Rights Act of 1993 (I think that is the year) says otherwise.

This is an abhorrent example of not only censorship, but ignorance as well.

My advice for the artist? Take the money and then use it to finance a film about the making of the piece, what it meant and the impact of this kind of censorship. Use the opportunity to exercise your freedom of speech!

Exactly Tami, a piece on the censorship would make an important statement about the governance of the city.

Peter, I stand corrected, I had no idea. The only question now is whether Ms Cabrera can prove “recognized stature”.