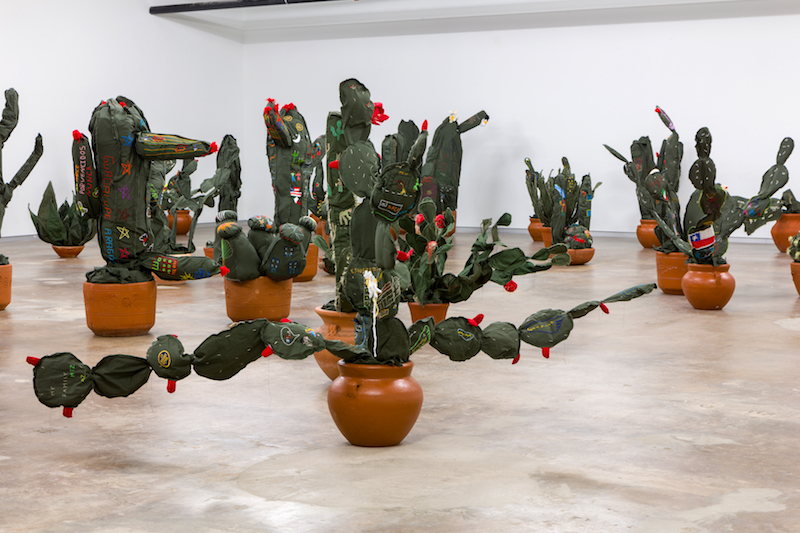 The Dallas Contemporary has a history of bringing the  work of various cultures to Dallas and, in this case, the work of Margarita Cabrera could hardly be more poignant. While transcending “isms,” Cabrera’s series of large cacti, sculpted and sewn from border-patrol uniforms, address current turmoil to bring us into the sphere of felt experience. Her solo show at Dallas Contemporary, Es imposible Tapar el Sol con un Dedo (It is impossible to Cover the Sun with a Finger), is both moving and insightful.

Patricia Mora: I was quite taken by your piece with the blue buckets and domestic items. It seems to offer ingress into how the “American Dream” can devolve when the true daily nature of the immigration process is realized. Could you elaborate on this piece?

Margarita Cabrera: This work was commissioned by the Dallas Contemporary for the current exhibition as a way to bring audiences closer to some of the stories embroidered on the surface of The Space in Between sculptures, and to invite acknowledgement of our shared histories. What Lies between Earth and Sky is inspired by 19th-century American expansionist style of painting, which focused on ideas of nation building aimed at inspiring settlement in the land of the free. I was exposed to large paintings of this type while working at the Metropolitan Museum of Art in the late ’90s when I attended Hunter College, City University of New York. These paintings had political and spiritual undertones and, much like the Statue of Liberty, offered a welcome to waves of immigrants from Europe — honoring them and celebrating their potential as new settlers. 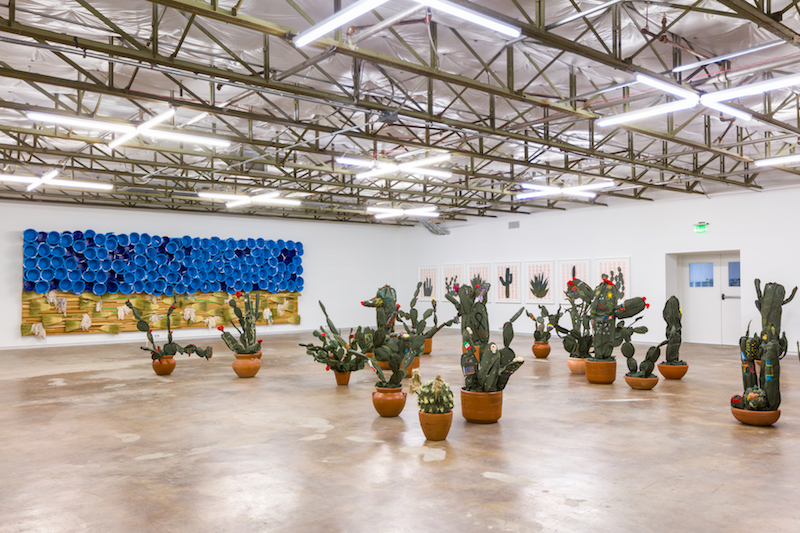 What lies between Earth and Sky is my version of an abstract landscape that represents a different type of welcome to our immigrant communities today. This found-object construction of brooms, mops, and cleaning buckets represents a landscape where people are welcomed and valued for the physical ability to work. The large-scale nature of What Lies between Earth and Sky intentionally envelops viewers and makes them confront the subject of domestic work, and how this type of labor becomes part of everyday lives.

PM: I note that the cacti are blooming and the show — despite the travail it evokes — has an overriding sense of optimism. Can you elaborate upon that?

MC: The Space in Between landscape is growing and flourishing with optimism. Our intention is in “relationship” and the opportunity to create it honorably in art environments. The invitation is to inspire our communities to collaborate in art processes where symbolic materials are transformed into new shapes that inspire important dialogue at the forefront of Space in Between. It is my hope that Dallas communities will want to form part of The Space in Between “national collective narrative” by creating a platform for cacti sculptures to be made locally, giving audiences a true sense of the Dallas immigrant community. 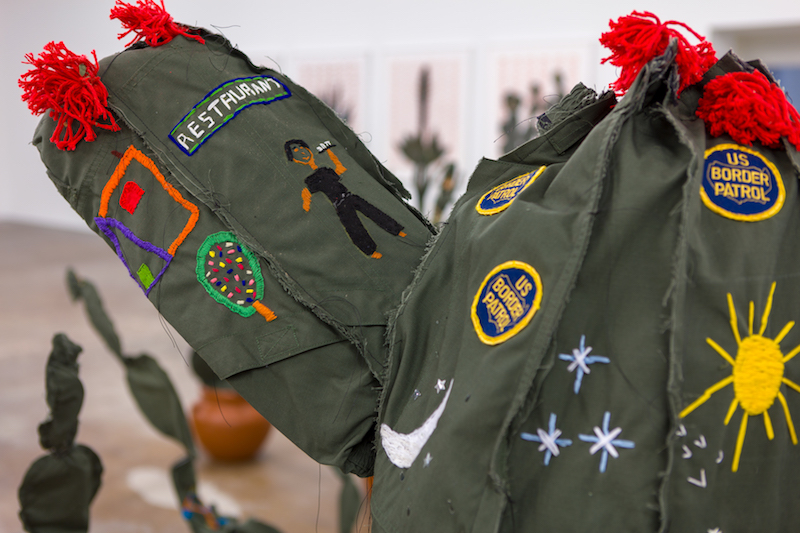 PM: Can you tell me more about how this show fits into your overall vision?

MC: My art practice aligns with others working with socially engaged art in community. It empowers individual communities to define their place and voice in the social and cultural dialogues evolving within their communities. My art bridges contemporary art practices with traditional craft processes, allowing participating communities to reclaim, preserve, and innovate their traditions. Es imposible tapar el sol con un dedo is the title of the show at DC and I see it as a great opportunity to bring this artistic dialogue to the museum and the Dallas community at large, to emphasize the fact that art has no borders and that, as an organization, they are welcoming The Space in Between into their cultural platform. And, by extension, all the people represented in the work. This representation of art in the Dallas community is setting the tone for local communities to feel that the museum is meant for them — and they can see themselves as included in an artistic dialogue.

PM: Tell us about your images of butterflies and pennies.

MC: The Butterfly Suite is a series of works (editions) that relates to an artistic community collaboration that took place in 2008 at The ArtPace Residency [in San Antonio]. It is done in conjunction with our immigrant communities to bring to light the labor histories and the rise of the maquiladora Industry lining our US-Mexico borders, as well as the decline of traditional Mexican crafts.

Working with local communities, we presented the work in two parts. One: a maquiladora production of 2,500 copper sculptures of monarch butterflies in the gallery space at ArtPace, and Two: the installation of thousands of sculptures in a private home. The copper sculptures of butterflies, rolled tongues, antennas, legs, and the wings were printed with a monarch wing design on one side and the symbol of the American penny on the underside. The monarch butterfly represents the perseverance and resilience of our immigrants in overcoming great obstacles as they travel great distances. Meanwhile, the American pennies represent the currency that drives large waves of immigrants to the U.S. looking for jobs.

PM:  Given our current political situation, your work is timely. Can you comment on how the “timely” intersects with the “timeless”?

MC: The “timeless” in this show exists in the representation of the land, our people, and cultures. The memory of our land transcends all manufactured borders. Much of my work tries to make the invisible visible and promote the idea that actions have reactions. For example, the works comprising Time Does not Forgive and The Space in Between shed light on many issues of immigration — one is the reality of separation of family, brought to the fore through embroidery and storytelling. 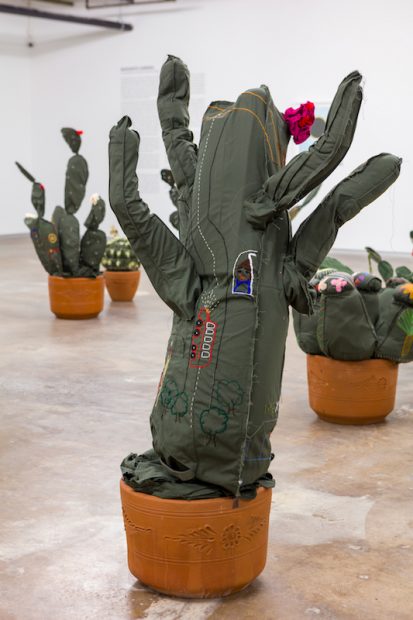 Audiences can begin to see beyond the facade of a “tabloid topic” that places our communities against a wall with political agendas and, instead, starts to acknowledge the long-term effects of the types of separation enforced by government officials. We know family separation accompanies other forms of trauma that are known to affect several generations. Our human biology carries physical and mental reactions to traumas (such as starvation, abuse, isolation, and stress) into future generations. It is my hope that the exhibition inspires necessary community dialogue and engagement to create an overall sense of hope, responsibility, and stewardship towards the land, our cultures, and shared histories. 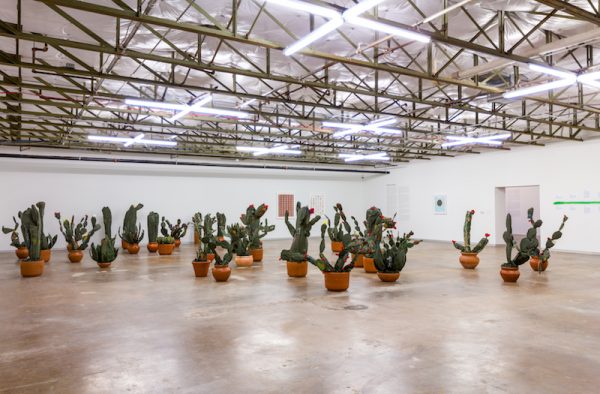 PM: What are you currently working on, and how do you see your work moving forward in the future?

MC: Two years ago I was commissioned by the San Antonio River Foundation to make a public art sculpture for Mission San Fransisco de la Espada focused on mission and ranching history. I proposed Arbol de la Vida Voces de la Tierra as a community public art project that would bring the community together and create a link between the San Antonio River and the mission, thus activating the spirit of the area.

The public art sculpture measures 40 feet in height and 80 feet across, and it is inspired by the local community’s own stories and formed by their very own hands. The Arbol de la Vida project is inspired by Mexican craft traditions. We have facilitated dialogues as well as the largest “marathon” of ceramic sculptures making ever to take place in the city. It produced over 700 stories, with people and sculptures depicting the magical history of this city. Currently, we are installing the ceramic sculptures on the tree’s primary structure and soon we will announce the unveiling of a public art work that will honor San Antonio’s community and history; it is one that will inspire many future generations to come.

Margarita Cabrera’s Es imposible Tapar el Sol con un Dedo (It is impossible to Cover the Sun with a Finger) is on view at Dallas Contemporary through  March 17, 2019.

This interview is edited lightly for length and clarity. All photos by Kevin Todora.