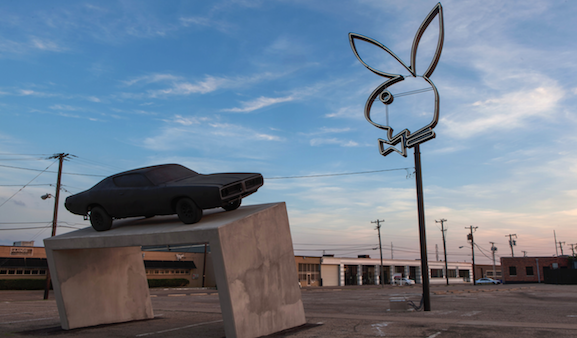 Via the Contemporary: “The work was originally intended to be on view for only a year, but its presentation was extended as it became a much-loved fixture of the Dallas Design District.” (‘Much-loved’ is debatable. It is nonetheless distinctive.)

Playboy’s special projects director Neville Wakefield contacted Phillips about a Playboy art commission in 2012 as the magazine was giving itself an image makeover, and Phillips decided to site the two-pronged sculpture in Marfa. The side-by-side 1972 Dodge Charger and 40-foot-high Playboy bunny logo lived along Highway 90 briefly in 2013; Marfans and the Texas Department of Transportation weren’t pleased about this. So it found a new home in Dallas. When it was first installed in Marfa, Phillips called it “…a beacon, a touchstone where all these different aspects of our lives — art, politics, sex — come together without contradiction.” Phillips has had a presence in Dallas as a collected artist for years, and as of 2016 was on the Dallas Contemporary’s board of directors. His show at the Contemporary was his first institutional solo exhibition.