When the intended installation of a giant, neon Playboy bunny sculpture outside of Marfa was first discovered and revealed by the Big Bend Sentinel, it caused much curiosity. The sketches and diagrams filed with the county included the name of writer/curator/artist Neville Wakefield, Playboy’s new creative director of special projects. The sculpture went up quickly, but neither Playboy nor Wakefield were saying much. 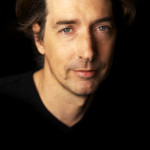 Now, Whitewall magazine has reported that Wakefield and artist Richard Phillips held a celebratory dinner in New York City the other night with a group of “art and fashion influencers” and a couple of Playboy playmates in bunny ears. In explaining his inspiration for the work, Phillips apparently treated the crowd to a story of stealing his dad’s Playboys from a locked desk drawer as a young boy.

Wakefield and Phillips also granted a recent interview to the New York Times, explaining the project and its future. “That Playboy emblem is a beacon,” Phillips said, “a touchstone where all these different aspects of our lives — art, politics, sex — come together without contradiction.” They also explained that the current installation is merely “phase one,” as Phillips will be back in New York working with a custom fabricator to “reimagine” an identical Dodge Charger to the one included in the sculpture. The vaguely described second phase will be revealed by the end of the year.

Phillips, best known for his hyper-realistic portraits of women (often from pop culture), is well known in Dallas for bringing his art star celebrity and raising serious money for TWO x TWO for AIDS and Art, a gala/auction benefiting amfAR and the Dallas Museum of Art.

Phillips is no stranger to mixing it up with the sponsors. Hardcore fans of Bravo’s Work of Art may recognize him as the guest judge on season one, on the most blatantly commercial episode in which the challenge was to “create a work of art based on your Audi experience” (also the episode in which Miles brilliantly naps in the car showroom for inspiration).

Below is the Playboy Marfa promo video:

Wow that video is beyond stupid and horrible.
new work from Austin artist handles the bunny.
http://austinfront.blogspot.com/2013/06/bum-bunny-new-work-by-paul-beck.html

Nice!! Thanks Owen, and thanks Paul Beck. Power to the bunny people!