by Jerry E. Smith May 9, 2014
FacebookTwitterEmail

Julian Schnabel, both the man and the art, put on a performance while in conversation with Director Peter Doroshenko at the Dallas Contemporary on Saturday morning, April 12. According to Doroshenko (via the show’s press release) Schnabel is “one of the most important and influential artists living today. . . a seminal figure for all current painters.”

Let me get the adolescent hero worship over: as an grad student in the 80s, Schnabel’s Exile (1980) was, in my mind, the greatest work of art ever, and it still is a favorite of mine for its audacious theatrics. Antlers over a Caravaggio self-portrait! 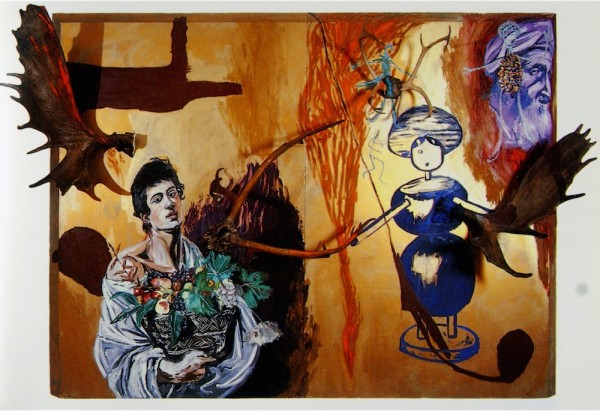 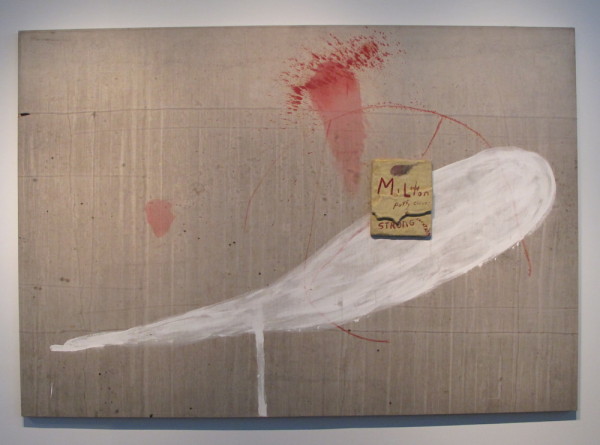 This is where the word “But” intrudes like the flesh above a plumber’s sagging waistband:  But the conversation at the Dallas Contemporary was so obtrusively a performance.  For starters, it looked like the wardrobe crew had dug up the “stereotypical artist” rig for Schnabel: artfully splattered painter paints, untied work boots, and slightly seedy black sport coat. Schnabel dramatized his pauses with a cigarette and lapsed into an equally dramatic introspection while informing the audience, “it’s just too painful, I can’t talk”–a pose which only lasted as long as the script required, after which Schnabel’s animated film director/art star persona was back.

Whether it is calculated or spontaneous, the artwork IS masterful. A work like Untitled (Milton Puffy Clouds Strong Cocktails) is about mark-making. The inclusion of objects and words reflects a manner still current decades after Neo-Expressionism, especially when the artist notes that the canvas itself was a found object— a drop cloth. Schnabel spoke of his love for the codex of mark making: the old academic formulas taught for denoting trees, draping cloth, etc., and one can see how imagery from the past is the inspiration for his gestural marks, magnified to monumental scale.

But the majority of the works present more artifice. They have the requisite poured paint, splattered paint, layered paint, but when the artist sends out images to be enlarged and printed on polyester, it negates a bit of the genius of pure painting. The printed pieces are too scripted, as in Untitled (Antonioni was Here) from 2010.  At his artist talk/performance Schnabel told the story of acquiring a postcard from the great director, who lives nearby. Schnabel said that enlarging the elephant photograph on the card to heroic proportions and printing it on polyester speeded up the painting process. Given the simplicity of the single red, tree-like shape and the scrawled word “Antonioni” across it, just how quickly did the artist need to paint? 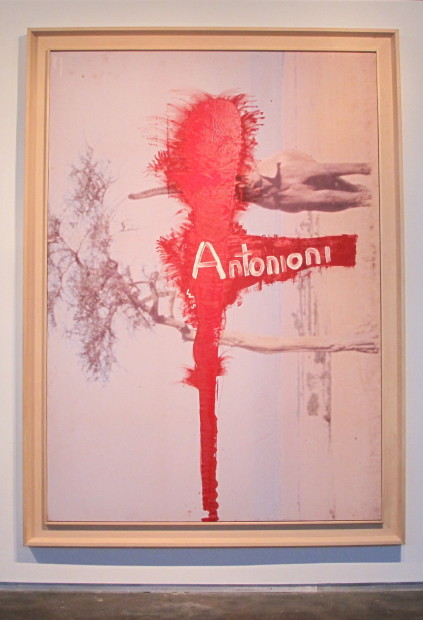 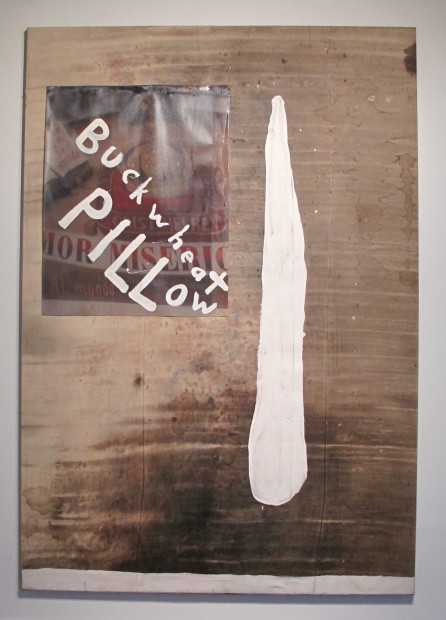 In Exile, painted three decades earlier, one can see Schnabel’s name-dropping homage to Goya as a bit of youthful bravura, and we can respect Schnabel’s ability to paint the image of Caravaggio in a facile manner resembling the original. The recent printed images, by skipping the tedious process of rendering, seem more about the product and a grandiose display of resources: “look at me; I have my people who print bigger images than anyone else,” they say.

Using industrially printed billboards as ground upon which to paint isn’t necessarily evil. In Buckwheat Pillow Schnabel tacks a pre-printed photo image to a gorgeous stained canvas drop cloth, using the print more as a sacred found-object talisman than as a shortcut to photo-illusionism. Is pure painting more sincere than printing? Before you state your firm belief in their equality, can you say (without cringing) the word “Giclée?”

Please don’t think I only respect realism because it suspends our disbelief. In cinema, suspension of disbelief is what makes a film successful. We in the audience need to forget we are watching light projected on a screen, and to feel we are voyeurs to a real event.  Ironically, Schnabel said that what he thought was his most successful quality as a film director was his ability to place people in a visual setting and step out of the way so they could spontaneously do what they do best. The artist foregoes that allowance in some of his paintings; they never really get to do something on their own without calculation. They are productions, and a product of the persona of Schnabel, rather than the person. 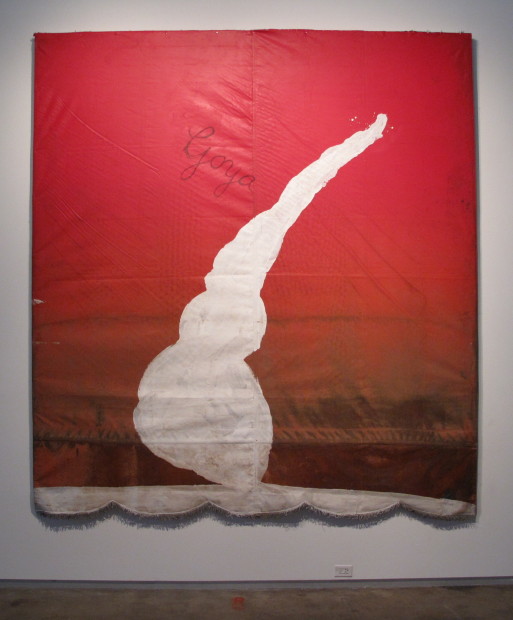 Schnabel’s strong persona—especially visible in the artist talk—shows that the work is less about the product of Schnabel the artist, and more about Schnabel the Director. We see Schnabel the calculating dramatist in full Oscar performance mode in both the lecture and in Untitled (Goya) 2007, another painting where the story of its creation is more important than the product. Untitled (Goya) is a found object–a dirty, sun-bleached awning, fringe dangling loose at the bottom–over which Schnabel has applied a veneer of orange oil paint and the word “Goya.”  He told an amusing tale of being on vacation with his children in Morocco, seeing the awning on a butcher shop, and doggedly contriving to purchase it from the bewildered butcher. Then comes the effort to find a work crew to instantly take it down (remember, the Director doesn’t do the grunt work), and finally an image of the mighty hunter bundling his trophy canvas into his vehicle so as to continue the family journey.

He didn’t speak of how it was an imposition on the businessman, and a greater imposition on his children, and seemed oblivious to the fact that his immediate need for that awning trumped what for most families would be a precious Kodak moment.  All I could think was “Dude, it’s been hanging in the sun for decades, get it next month, just enjoy your kids right now. . .” and then, “this is the great result that came from all that drama?”  Perhaps the word “Goya” in the painting refers to Goya’s famous Saturn Devouring His Son.

The few real paintings in the show are modern art by a modern master.  It’s too bad the whole cast of printed actors detract from the stellar cameo performances by Schnabel’s genuine canvas and brush works. Schnabel concluded his talk by saying that that his new book (featuring a mere 500 paintings) would be available soon, making me guess that the publisher’s deadline was the ultimate director of the mass production of pre-printed images, more “touched up” than painted by hand of the artist.

Likewise, there was no real difference at the Dallas Contemporary between the scale of the printed images and the scale of the artist’s persona projected upon the audience. I guess I’m naïve to have expected humility; after all, in cinema the name of the director shown in the credits is no less real than the flickering light rays forming the actors.

Thank you for saying “grandiose display of resources.” Your insightful review could be about the “Schnabelization” of the art world. Success appears to require control of real estate [i.e. large spaces in which to work], assistants and handlers, possession of extravagant materials like antlers and crockery that can be destroyed and defaced, as well as a callous disregard of other artists whose work can be appropriated and neutered at will. The wooden figure on the right in “Exile” reminded me of Cheryl Laemmle’s work; where is SHE now?