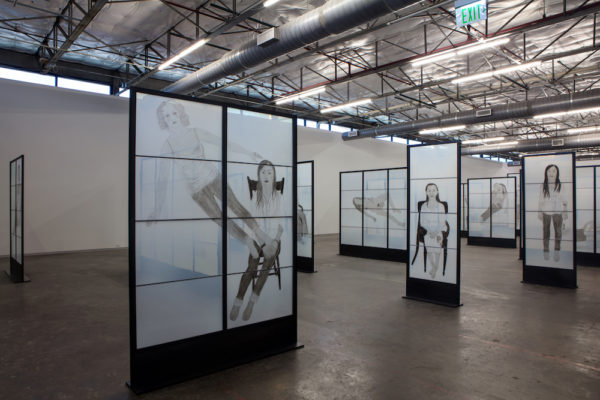 In Kiki Smith’s installation Pilgrim, at the Dallas Contemporary, the artist has created a room dedicated to a woman’s most important memories — a place where impressions of her life’s events, and those she shared them with, are collected, displayed, and contemplated. In the gallery, we walk amongst these excerpts of life as free-standing, life-size drawings rendered on milky white, stained-glass panels. Moving in and around the installation of these large-scale works, we take in the cycle of a woman’s life, from conception to death, like trees in a forest. Pilgrim forms the heart of Smith’s exhibition Mortal, that opened on September 29th.

In moments ranging from the significant (childbirth, a deathbed) to the mundane (looking at a bird, sitting with a child), Pilgrim captures a silent journey through time. Sitting, lying or standing, these women appear primarily alone, though at times they’re depicted in the company of another woman, child or man. The scenes are static, and the figure’s surroundings are reduced to an occasional fragment of floor, wall or chair. In effect, the subjects appear to emerge from a white fog — an impression augmented by the experience of seeing the vague outlines of subsequent panels through the milky white glass. Staring into the distance, the introspective quality of Smith’s portraits create an unusual dialogue between the individual panels as well as with the viewer. In this way, the theme of memory is continually performed and re-enacted — by the viewer grasping the scenes’ narrative and chronology, by Smith who drew on her own memories to create these scenes, and by the women in the drawings lost in thought. 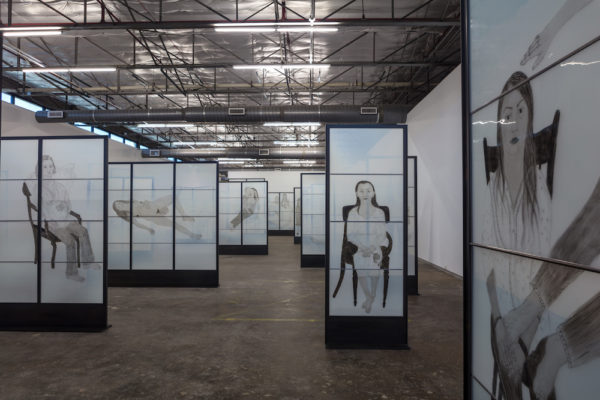 In the space, the panels are staggered and laid out in a prescribed formation. The effect on the viewer, moving through installation, is the feeling of walking through a maze-like succession of small enclosures. With each turn, panels behind you disappear as new ones, in front of you, appear. In this way, Smith’s use of glass creates a successful and unique sense of time, space, and interconnection between the works. As the spaces and scenes alternate, the viewer’s sense of solitude and intimacy is reinforced.

This controlled progression, however, also constrains our full absorption of the panels. From a distance, the glass drawings appear to match the intensity and achievements of Smith’s most characteristic works. Up close, and in comparison to other works in the show, they lack focus. Smith’s exacting technique — exemplified through the captivating texture found in Touch, a series of etchings also on view — is replaced in Pilgrim by scratched surfaces that fall short of concentration and intent, and Smith’s marks lack the same deliberateness and control as evidenced in her other work, in other mediums. This discrepancy is especially noticeable in several of the portraits’ faces. Smith portrays one of the women in Pilgrim in the woodblock-print piece Mortal, from 2007, yet in Mortal the resulting lines are concise and efficient. In comparison, the translation from drawings to the glass panels often feels uncertain and chaotic.

Mortal‘s woodblock-print portrait series anchors the subsequent room of the exhibition, which is an otherwise wide-ranging compilation of printed and sculptural works. In Mortal, the final days of an elderly woman’s life is depicted. Carved out as white lines against a solid black background, she is propped up against a pillow, and her expression alternates between resignation, pleading, and terror. 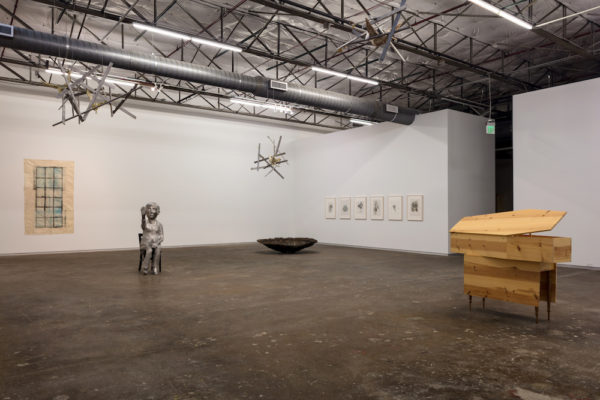 A dark mirror to the quiet scenes of Pilgrim, Mortal‘s harrowing portraits are placed in opposition to a range of sculptures and works on paper depicting motifs of death and transcendence. For example, in Heute, from 2008, Smith’s wooden coffin is staged on a table with glass dandelions growing from its bottom. In Messenger, also from 2008-2009, three sculptures of golden doves are enclosed by a cluster of planks suspended from the ceiling. In Ditch (2002), a large basin made out of corroded bronze bears gothic lettering of text from Revelations: “I am the alpha and the omega the beginning and the end I will give to the thirsty from the fountain of life.” In effect, these sculptures and other works shown in this room signify a move away from the very personal representation of memory, as seen in  Mortal, and instead create symbols that mark the absence of memories. With this, the focus of the exhibition shifts from remembering to commemorating. If Pilgrim represents a journey through life, here we see life come to an end. 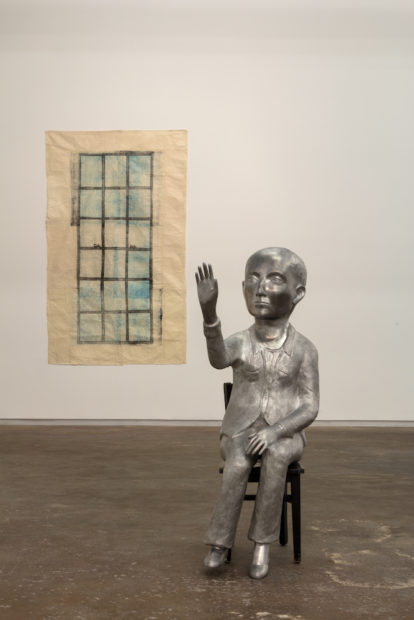 Smith chronicles a life from the perspective of death. Altogether the works present the futility of our struggle to find meaning in our past. Bridging the two galleries is a final glass panel from Pilgrim, mounted to the wall by the entrance that links the two galleries. On it, a single chair is depicted, and with its occupant gone, all we are left with is absence. Throughout this exhibition, Smith reminds us that more than anything, memory is the representation of what is lost to us.