An icon in the fashion world, Mario Testino has turned his lens on just about every noteworthy celebrity and model you know. Shooting for high-end labels like Gucci, Burberry, and Chanel while also photographing for prominent magazines like Vogue and Vanity Fair, he has become one of the most recognizable commercial photographers of the day. Given this resume, Testino’s return to his native Peru to shoot Peruvians wearing traditional clothing is an obvious departure from the photographer’s typical subjects. Testino’s show at the Dallas Contemporary, Alta Moda, a punning title that means “high fashion,” references both his fashion photography background and the mountainous region where the clothing originated. 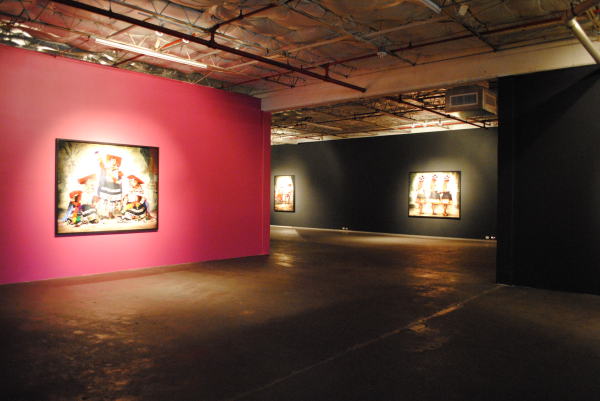 This show stretches out across a major portion of the Contemporary’s space, which has been dramatically darkened with only spotlights fixed on the works. The effect is a decidedly glamorous and cinematic feel, one that seems particularly appropriate given Testino’s past work. Most of the large-scale photographs hang on black walls with the occasional bright paint accent breaking up the space and echoing the clothing displayed in the foreground of the works. 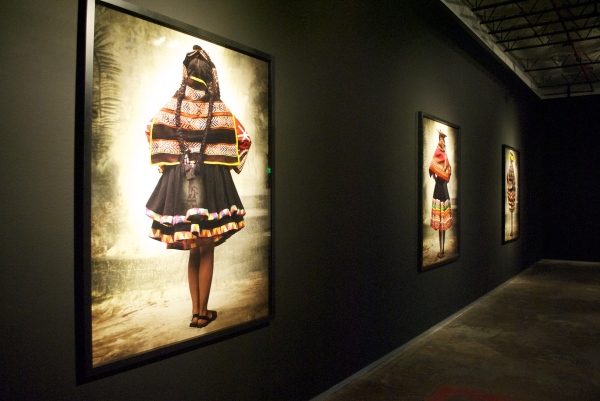 In stark contrast to the vibrant costumes, the subjects in every photograph are positioned against fading painted backdrops. This subdued background imagery not only emphasizes the clothing but also directly references the Peruvian photographer Martin Chambi. One of the first prominent Latin American photographers, Chambi’s photographs of indigenous Andean people from the mid-1900s have been celebrated in prominent exhibitions, including a retrospective at MoMA in 1979. Beyond simply an aesthetic decision, Testino’s use of Chambi’s backdrops safely grounds this project in a cultural tradition, defusing outcries about projections of western standards of beauty onto a Peruvian cultural tradition. Testino effectively aligns his meteoric career with another noteworthy countryman, paying homage to his predecessor while imbuing the project with his signature touch. 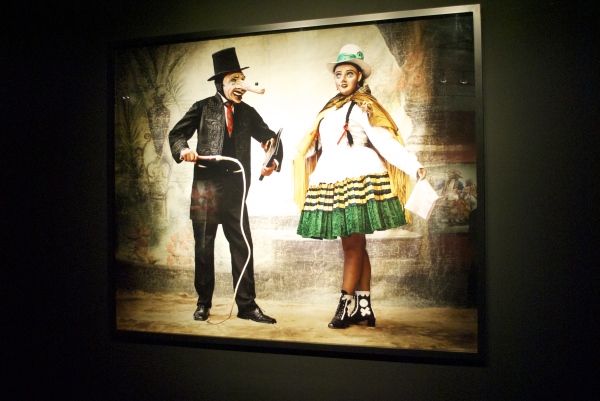 The wall text welcoming viewers to the exhibit begins with a quote from Testino where he states, “…when a country loses the connection between its history and its traditional dress, something truly precious is lost.” In some ways this desire to preserve a cultural tradition looms over the show. The clothing is recognizably antiquated and many of the subjects wear traditional masks associated with cultural festivals, which are explained individually in the show’s pamphlet. That said, the work seems less like a cerebral meditation on the impact of dress on tradition and more like a celebration of this clothing as aesthetically appealing objects. 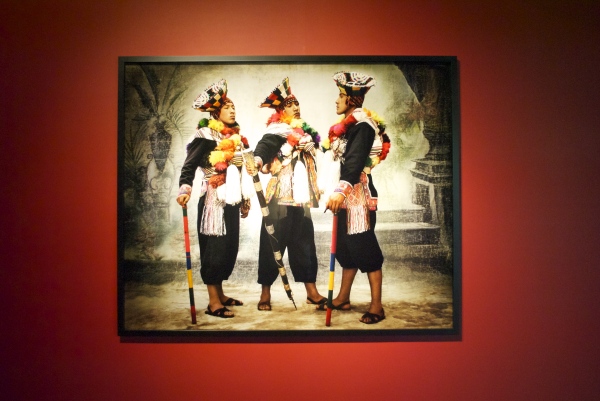 Stripped of his typical predisposition towards sex appeal or using celebrity stardom to attract viewers, Testino’s photographs satisfy the desire for sumptuous glamour by foregrounding dress. This ironic reversal of fashion photography’s typical emphasis on the aura around clothing instead of on the clothing itself is suppressed in this work. Instead, Testino foregrounds arguably his greatest skill, which is his ability to capture the best version of the already stunningly beautiful, and present it in a way that reminds viewers why this clothing deserves to be glamorized.