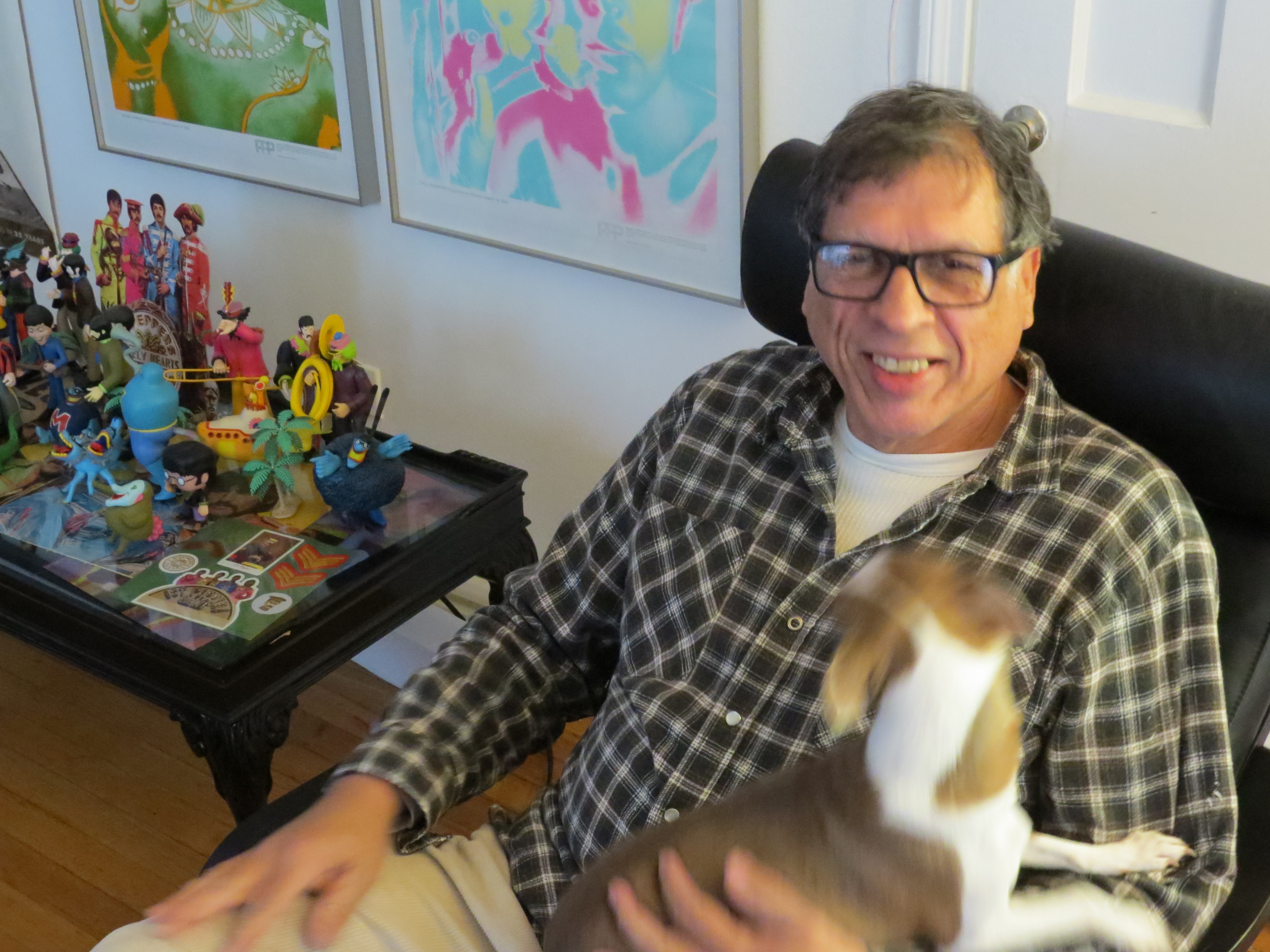 With his second retrospective on view through March 30 at the Gallery at UTA, Arlington,  64-year-old John Hernandez continues to remind us, in full-blown color, that we’re never too old to be young. Since the early 1980s, the San Antonio native has surfaced now and again with exhibitions of highly eccentric painted reliefs, sculptures, and installations featuring loony, childlike imagery that’s often cleverly encoded with biting social commentary. A fan of Ed “Big Daddy Roth” and a collector of thousands of toys, vinyl records, psychedelic posters, old comic books, and original copies of Mad Magazine, Hernandez surrounds himself with pop-culture artifacts that inspire him on a daily basis.

As a youth, Hernandez’s favorite pastimes included watching horror films, reading sci-fi magazines, and building models from store-bought kits. His art education didn’t begin until he took some classes at San Antonio College in the early 1970s, where he studied with Mel Casas and Luis Jimenez. He then transferred to Our Lady of the Lake University, where he earned his BA in 1975, and went on to study at the University of North Texas, Denton, where he was mentored by Vernon Fisher and received his MFA in 1980. During his college years, he became totally enamored with the quirky and irreverent style of Chicago’s Hairy Who artists, San Francisco’s Funk artists, and like-minded Texas counterparts George Green and Bob Wade. Hernandez often appropriated elements from these artists’ works in his own early collage work, conjoining pop-culture images in irrational juxtapositions to form cubist compositions. 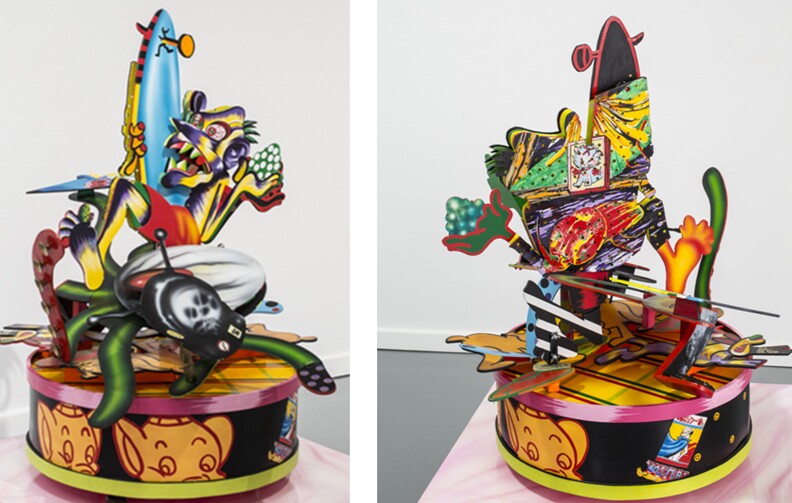 Hernandez’s  moment of breakthrough—the time when he found his unique voice—occurred in the mid-1980s. Tapping into his skills as a model builder, Hernandez chose a maximal style for building 3D assemblages loaded with multiple layers of content. Difficult to decipher in the way that Cubist paintings were when Cubism was new, Hernandez’s reliefs can be enjoyed on a purely visceral level as psychedelically playful and jubilant. But if we scrutinize the details, we realize that they’re made up of image-loaded cut-outs that use pop culture memes to comment on such topics as narcissism, fame, power, greed, and violence. (Hernandez himself is incredibly private and low-key.) In Living Eye (1986), for example, Hernandez culled images from comic books and nature magazines, painted them on shaped sections, and joined these together to form a satirical sculpture of an egotistical surfer—a cultural stereotype of the 1960s—but used here to comment on the self-absorption of 1980s yuppies.

In creating wall reliefs such as Academy Award (1987), Hernandez employs a similar process of building a composition from meticulously painted units, with narratives embedded in the minutia that live within the fluid interplay of extreme color and confusion. With lust for fame as the theme, the central figure in this work is a 1940s Tex Avery cartoon character, the hungry wolf. Look elsewhere in the composition and you find references to Jimi Hendrix, Michael Jackson, Vishnu, exploding mice, and a woman walking into a plate-glass window—an image appropriated from Mad Magazine. In Trojan Bath (1989), the dominant feature is the oversized foot of a Roman emperor, positioned such that it will stomp on anything in its way. References to abuses of political and military power abound in this wall relief, which is shaped like a Nazi swastika and also includes depictions of a hammer and sickle and a Roman helmet. In a subsequent work, Solanisquid (1995), the quest for fame has turned violent, as the bikini-clad figure of Valerie Solanas—the disgruntled feminist who shot Andy Warhol—and a host of emblematic signifiers are shown entangled within the writing body of a giant squid.

Over the years, Hernandez has been invited to create site-specific installations. In Jerry’s Kids, which Hernandez first created for his Artpace residency in 2000, the artist pays homage to Jerry Lewis’ annual telethon to raise money and awareness for muscular dystrophy. The central figure is a giant creature based on a 1950s Basil Wolverton cartoon, shown with meteoric flames soaring through its body and out onto the wall in the form of painted pink splashes. In the details, Hernandez celebrates his love of Lewis’ cornball comic style, and includes a caricature of Lewis on the heel of the creature’s shoe.

For his first 30-year survey (which I organized in 2009 for the San Antonio Museum of Art), Hernandez introduced the idea of a “cumulative retrospective,” integrating earlier sculptures with new works. It included a wall mural (inspired by Aesop’s Fables) titled Zoe’s Room, a vibrant wonderland honoring the then-two-year-old daughter of the artist’s principal collectors, Joe A. Diaz and Georgina Morgan.

For his current retrospective at UT Arlington, Hernandez has once again presented his entire oeuvre as a work-in-progress, exhibiting old and new together, and integrating some of the earlier works into the compositions of wall murals created specifically for this incarnation. In the new sculptural relief Pinocoboat (2015), which is based on an early 1960s Weird-Ohs Car-Icky-Tures model kit, Hernandez transforms the kit’s suburban businessman by moving him from a car to a boat that rides a tongue for a wave. Shown with a Pinocchio nose and spouting a tree limb, the figure is now conceived as a liar, bringing to mind the kind of Wall Street executive who’s a focal point of our current political debates. As a contrast to this villain, Hernandez also includes Optoemystic (2016), a playful figure who represents the enduring spirit of hope.  Seated while caught in traffic with an Op Art book on his lap, this is the optimistic mystic—the kind of guy that even we adults need to believe in.

Beautiful work! I hope all is well with you John!!!