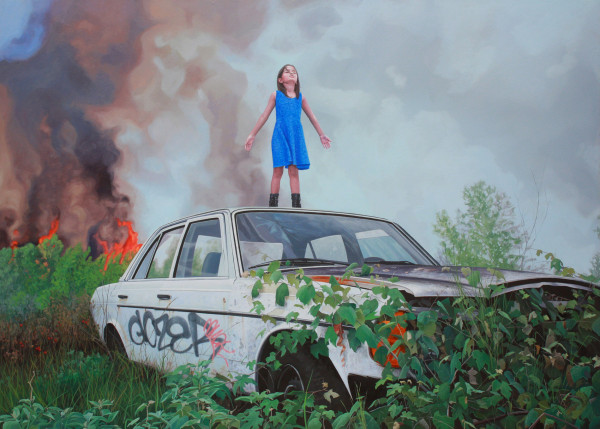 Houston artist Kevin Peterson has won this year’s $50,000 Hunting Prize, for “Fire,” a photorealistic painting. Peterson received his BFA from Austin College in Sherman TX (north of Dallas) in 2001, and has shown regularly since 2007, often in shows dedicated to figurative art. He works out of Winter Street Studios in Houston.

Peterson’s artist statement reads in part, “These paintings are about trauma, fear and loneliness and the strength that it takes to survive and thrive. They each contain the contrast of the untainted, young and innocent against a backdrop of a worn, ragged, and defiled world.”

The Hunting Prize is awarded annually by Hunting PLC, an energy services company, during the Offshore Technology Conference (OTC), a major international trade show for offshore oil drilling that occurs in Houston. The award goes to an artist living in Texas for a 2-D drawing or painting. The award was established in the UK in 1981 and relocated to Houston in 2006.

So very proud of fellow Houstonian. I have always been awed by his tremendous talent, and he certainly deserves this award and honor. Looking forward to seeing more of this talented artist’s art. Congratulations Kevin.

I have seen him at Winter St. several times. He’s very talented and the work edgy. Congratulations!
– joel