Love in the Kingdom of the Sick, an exhibition of drawings by Michael Bise currently on view at Moody Gallery, creatively chronicles the artist’s deep and surreal, personal experiences during the ordeal of his 2012 heart transplant. Josh Fischer’s recent Glasstire piece is a great introduction to the show. But here, I’d like to hone in on an aspect of the work that might easily go under-appreciated or maybe even unnoticed between the heavy nature of its content and the direct nature of its medium. I was struck by the cinematic qualities of these drawings, and by elements in them that reference specific movies. I spoke with Bise at some length about the influence of cinema on his life and the role of movies in his artmaking. While referencing and manipulating movie culture is certainly not the main focus of his work, translating movie images and adopting cinematic devices is a fascinating undercurrent here, and has been at the heart of his creative process from the very beginning. 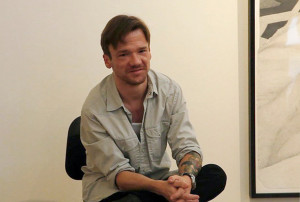 Bise’s health problems have been with him since birth. As a kid, he wasn’t always physically able to run and play. And, growing up in a Pentecostal household, he wasn’t allowed access to television or popular music. He did, however, have a place for cultural input and creative output: a room in his grandfather’s home containing a three-light video projector and big screen, VHS tapes of old movies, and an unlimited supply of typing paper to draw on. From the age of 8 to well into his teens, Bise spent countless hours watching classic genre movies—westerns, gangster films, biblical epics, slapstick comedies—and simultaneously drawing his impressions of them. He recalls, “From as early as I can remember, I was transferring images from films to paper in drawings. I would condense a story into a picture—one image that would sum up something that took place over a period of time. It was this weird transference of film language into the static language of two-dimensional drawing. And that continued for a long time, doing those two things in tandem.”

After his father died, Bise began really thinking about the narratives of his own life and integrating them into his art. He revisited those childhood movie drawings, finding a wealth of personally translated cinematic memories in the form of crudely drawn cowboys, gangsters, Nazis from WWII movies, and—especially interesting to him—Roman soldiers drawn while watching films like Ben Hur and The Robe. He began going about the process of mythologizing his own experiences by re-creating elements of these old images in his paintings. He also began to revisit, with new eyes, those classic movies he’d seen as a kid, and to more rigorously investigate cinema. He thought about movie tropes and the formalities of those genre movies made during the reign of Hollywood’s moral Production Code. He sought out films by Stanley Kubrick, Ingmar Bergman, and Robert Bresson, and became interested in ideas expressed in Bresson’s “Notes On Cinematography”–specifically the filmmaker’s notion of the actor as a model or stand-in in service to the narrative. This consideration of movies and moviemaking concepts established a personal process and provided a gateway for Bise to conceptualize autobiographical narratives in his work.

Love in the Kingdom of the Sick, Bise’s most personal body of work to date, is not simply a document of his harrowing ordeal undergoing a heart transplant, but rather a series of considered and constructed flashbacks of the experience. They reflect intersecting narratives dealing with love, fear, family, solitude, life, death. And, perhaps ironically, a lot of the power of these personal and achingly human drawings lies in their strange, other-worldly qualities. 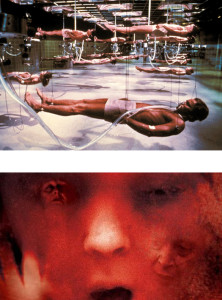 “Of all the experiences I’ve ever had, including the death of my dad, this was the most surreal.” Bise’s surgery was rocky, to say the least. He was in the ICU for a long five days following the procedure, heavily hallucinating the entire time. “And not like good hallucinating,” he assured me. He was unable to sleep, tortured by imagined scenarios, dark conspiracies, and fictional “overheard” conversations involving the withholding of medications, the murder of a fellow patient, and the belief that he had in fact not received the heart transplant. Even now, knowing none of this was real, Bise remembers it all vividly. “It was very cinematic,” he says. “It was like one long, terrifying, horrific movie. And a lot of hallucinations had the character of some of those movies from the ‘70s like Coma with Richard Widmark [the 1978 Michael Crichton film].”

To be sure, the experience was not helped by his haphazard decision to watch Lars Von Trier’s The Kingdom (Riget) shortly before the transplant occurred. The Kingdom (a hidden reference in the title of Bise’s show) follows staff and patients at a Copenhagen hospital as they encounter a variety of bizarre phenomena. “I have no doubt that watching that whole thing in 2 or 3 sittings shortly before the transplant affected the quality of my hallucinations.” I asked him if he’d considered maybe not watching a really strange, dark, Danish hospital series during a health crisis, and he replied, “No. That’s how stupid I am. I was like, ‘This will be fun.’” 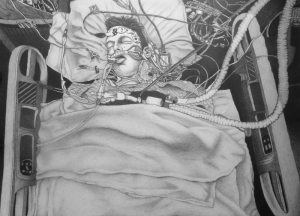 The first piece Bise completed in this series was Sleeping Man, a smaller self-portrait in which he is hooked up to a swarm of tubes. He’d not had any references in mind while making it, but looking at the drawing made him think of the work of director David Cronenberg–particularly his 1999 film, eXistenZ. With the drawing in hand, Bise re-watched that movie, considered formal connections, and decided then that he would filter the content of his experience through the genre of horror movies. “Horror films, like Westerns, are just these perfect vehicles for addressing the zeitgeist. And the thing I like about horror is that it addresses broad cultural fears in a really effective way.” This horror movie conceit provided him with some helpful constraints in processing the experience, and also allowed him a bit of emotional distance while making the work. In a way, Bise juggled two simultaneous, interconnected endeavors–one, making a series of deeply personal reflections, and the other, assembling and integrating his own existential horror movie montage. Whether apparent or not, most of the pieces in the show have specific “film touchstones,” as Bise refers to them—underlying movie references that he considered in the process.

Bise’s drawing Waiting Room, depicting a woman sitting beneath variously posed and off-scaled animals (an actual, creepy cabinet of ceramic figures in a Methodist Hospital waiting room) alludes to the foreboding stuffed birds in Alfred Hitchcock’s Psycho. “In the scene where he’s feeding Janet Leigh the cheese sandwich, all the stuffed birds are looking and you just know that something’s going to happen. I placed Adrian, my wife, in that waiting room, kind of in that position.” The drawing conveys the vulnerability of waiting for an outcome, especially in the company of those threatening yet frozen creatures.

Bise thought about the haunting, twisted paintings on the wall in Roger Corman’s 1960 movie The Fall of The House of Usher while making 24 Portraits, his depiction of a large wall collage of doctors’ photos in the hospital. “Those are all my doctors, and I worked with their faces and turned their eyes in ways that they weren’t in the actual collage. It was my attempt to elevate them a little bit beyond the photograph. Like, ‘maybe that’s not just a photograph, maybe those dudes are alive in there.’” 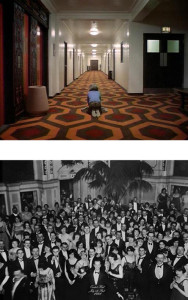 The most recognizable movie reference is the appearance of a hallway from Stanley Kubrick’s The Shining in the largest and most powerful drawing in the show, Elevator at the End of the Hall. The piece is from the point of view of Bise in a hallway looking up at his family (including himself)—presumably saying goodbye on the way into surgery, and not knowing if he’ll live or die. Most who’ve seen The Shining will recognize the distinctive carpet pattern lining many of the Overlook Hotel’s empty halls, and they might bring to the drawing connotations of ghosts, visions, atrocities, a family torn apart, or perhaps Kubrick’s unforgettable image of a sea of blood rushing out of the elevator doors as they open. Bise was thinking more about the movie’s bizarrely inexplicable convergences of the present, past, and future. The image of him, his wife, and his family in the piece was drawn from a photograph taken at his wedding, which actually happened after the transplant. “The viewer is looking at this possible future—at that point, it’s an imagined future. But I’m making it after the fact, so it did happen. That’s this little moment that I associated with the scene at the end of The Shining where Jack Nicholson is in the old photograph.” 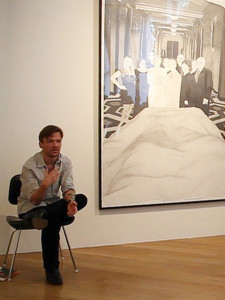 Bise considered scale in cinematic terms too, sizing each of the drawings appropriate to the impact of the moments depicted, as if scenes in a movie. He also framed the show with subtle touches that point to his conceit without being too overbearing. Instead of having vinyl lettering on the gallery’s wall, he created a “movie poster” print for the show’s title. He even collaborated with producer Eric Jarvis to create a “soundtrack,” a sustained, surreal ambience incorporating sound elements by musician Matt Johnson that was played at a low volume during the opening. Few people in attendance had any idea this was playing, but that was by design. Bise preferred it to be a subconscious element.

It’s not that he’s shy about these cinematic references or trying to hide them; he considers them important. They’re just more stirred in at the base than on the surface of the work. And that’s in keeping with what he loves about movies. “The whole point of film, or most film, is to hide the artifice, and to give the impression. With my work, that has always been my greatest interest: to hide the seams so that something happens as a viewer—whether it’s emotional or formal or what have you—but I don’t really want you to be incredibly conscious of it. I think that’s where I diverge from a lot of painting. The language of painting is all about highlighting and accentuating the seams and the process, and dissecting what’s going on. My interest is in creating an image that exists on first impression.”

That said, these glimpses beneath the stitches of Bise’s drawings are ultimately of little importance to the experience of them. But I think they do provide interesting insight into their making, and into an artist’s negotiation between real and constructed realities. Let’s think of this as the “director’s commentary.” And while we’re at it, let’s throw in a “dvd extra”. The artist has graciously allowed me to include the soundtrack piece created for the show’s opening (below), giving us an opportunity to hear the reverberating pulses and murmurs between scenes in the kingdom.

Love in the Kingdom of the Sick soundtrack excerpt, by Michael Bise and Eric Jarvis (Crushpad Productions), with sound samples by Matt Johnson.

Love in the Kingdom of the Sick is on view at Houston’s Moody Gallery through October 12.