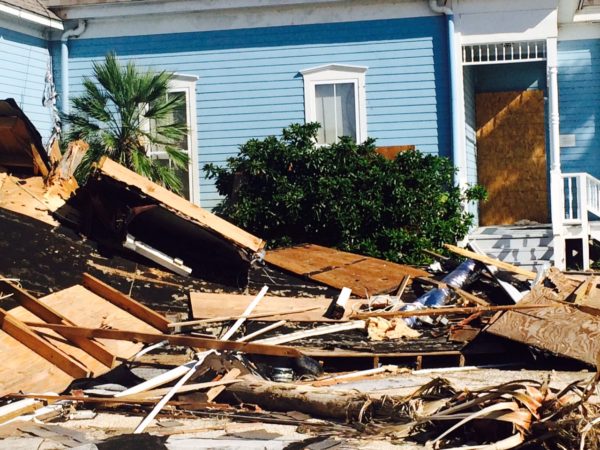 The back of the Rockport Center for the Arts, after almost two months post-Harvey

The Rockport Center for the Arts recently announced that its organization, and the City of Rockport, are recipients of a $5 million grant from the United States Department of Commerce, Economic Development Administration (EDA).

The city and its residents were adversely affected by the direct hit of  Hurricane Harvey in 2017 — homes, businesses, and landmarks in the city were destroyed. And despite an outpouring of both financial and physical support for rebuilding, the city remains on the mend.

The art center, which has for 50 years been a hub for the city’s creativity, didn’t fare any better than the city’s other structures: the Victorian-era house it had occupied since 1984 was severely damaged and eventually demolished following the storm. Although it lacked a permanent building, the Center began operations again in a nearby space only 99 days post-Harvey, and has not missed an exhibition or program since. It found new homes for some of the larger-scale exhibitions it had on the calendar, thanks to the generosity of neighboring institutions, and even continued its annual Rockport Film Festival, which was scheduled for just a few months after the storm. 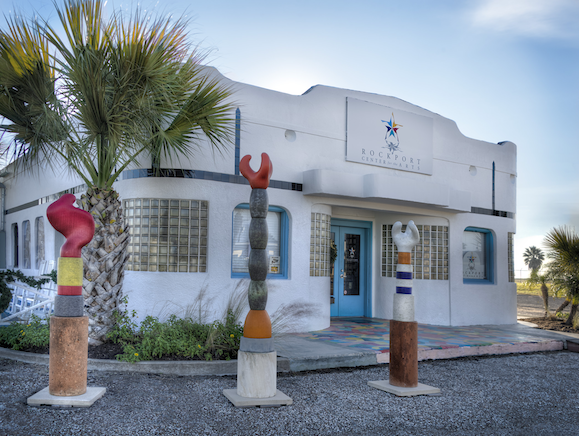 The Rockport Center of the Arts’ post-Harvey building

In this post-Harvey period, the art center has been focusing on its longevity in the city: namely, it has been engaged in a capital campaign to fund the construction of a new building and campus for its programming and sculpture collection. Totaling $8.5 million, the project will include more than 20,000 square feet of new space for the art center, and will act as a draw for tourists visiting the coastal Texas region. Initially boosted by a $500,000 grant from the Rebuild Texas Fund and an equal grant from the Still Water Foundation, the organization’s capital campaign is seen by the city’s Mayor, Pat Rios, as “a major step in the recovery from the devastating effects of Hurricane Harvey.”

Hugh Morrison, the Rockport Center for the Arts’ Board President, commented on the recent $5 million grant from the EDA, which will aid its building project:

“We are grateful to the EDA for recognizing the opportunity that the building of our project is for revitalizing downtown Rockport. As we begin our 50th year, we are excited to begin the construction of our new campus, which will feature a larger and more comprehensive art center as well as a critically needed venue facility. We are also thankful for the generous response to our capital campaign, which made this project possible. This new epicenter for downtown Rockport will generate economic activity for years to come.”

“The generosity of individuals, families, and institutions from across the State of Texas has made possible additional funding from the Economic Development Administration. A planned $8.7 million capital investment will be a huge leap forward towards the economic revitalization of Rockport and the restoration of cultural tourism. A new venue space will allow us to expand our programs from the visual to the performing and cinematic arts; as well as the humanities. The future for the arts in Rockport has never been brighter. We are humbled and thrilled.”

The Rockport Center for the Arts will begin construction on its new facility, which is located near the intersection of South Austin Street and North Street, later this year.

Congratulations to Luis, staff, and board. Excellent job!