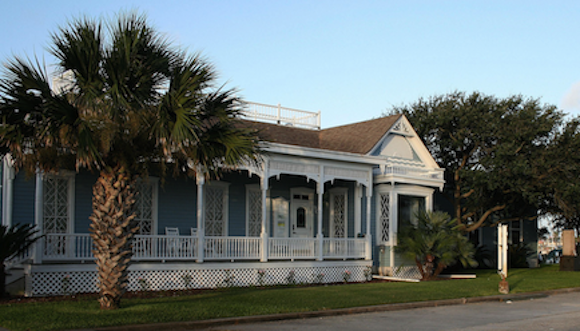 Yesterday, ARTnews reported Texas museum closings due to Hurricane Harvey with updates about the Menil Collection and the Galveston Arts Center (buildings: so far, so good). In part, the article reads:

What the article failed to mention is the poor Rockport Center for the Arts (RCA), which is directly on the water and was directly in the path of the hurricane. The Rockport mayor is urging citizens not to return to town until he gives the go-ahead, because there is no electricity, no cell service, no water, and no sewage. Mayor Wax expects that it will be 2-3 weeks until residents may return. Meanwhile, RCA Executive Director Luis Purón has released a statement, which reads in part:

From images I have been provided and third party accounts, it appears the building has sustained serious external damage.  One image demonstrates that the front porch is completely gone and a roof structure in the front of the building that is exposed and thus compromised. It is entirely possible that additional damage to the roof exists, yet only an onsite inspection will reveal that. We are working on obtaining that information. The building is still standing as it has since 1983, a few feet from Aransas Bay. It remains unclear if all the sculptures in the Sculpture Garden collection survived the 130 miles-per-hour winds of Harvey’s category 4 direct impact to Rockport.  We won’t know about internal damage until we are able to re-enter and inspect the building. The timeline for that is uncertain…..Rockport has a strong and generous heart, great will, and unbridled determination. United, we can restore our community in a responsible way.

To read the full ARTnews article (which will be updated as they receive more news), go here.

The Devil’s Own Day in Houston: Letter from...