Some Calm in Your Day: Jeffrey Poole and Peter Harrington at Artspace111 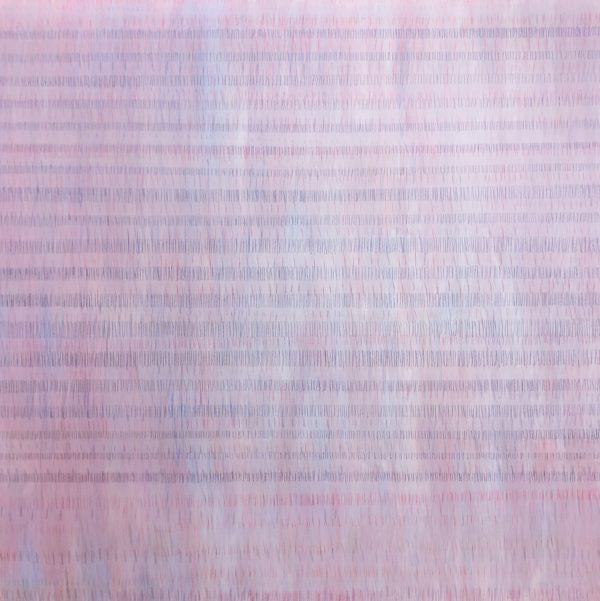 If one is hoping to come down from stress of daily existence, two concurrent exhibitions at Artspace111 in Fort Worth could do the trick. The works of both Peter Harrington and Jeffrey Poole are meditative and calming. Harrington’s oil-on-canvas paintings pair recognizable forms with slyly humorous titles, while Poole’s mixed-media, non-objective works are comprised of rows of mark marking that overlay fields of color. 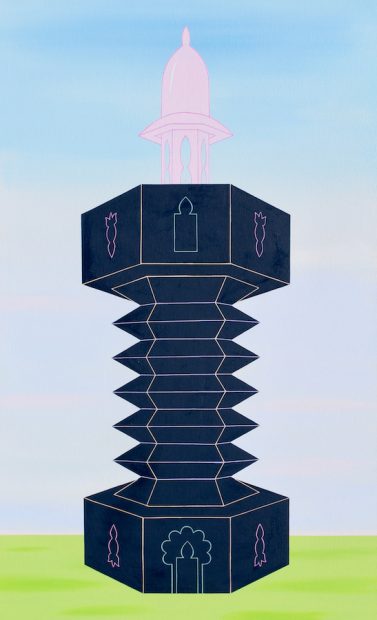 Harrington describes his imagery as  “… a kind of Kabuki of forms, often have a totemic, iconic expression. An unlikely, but inevitable, intersection of elements from primitive nature and the human presence, toward a philosophical whole.” 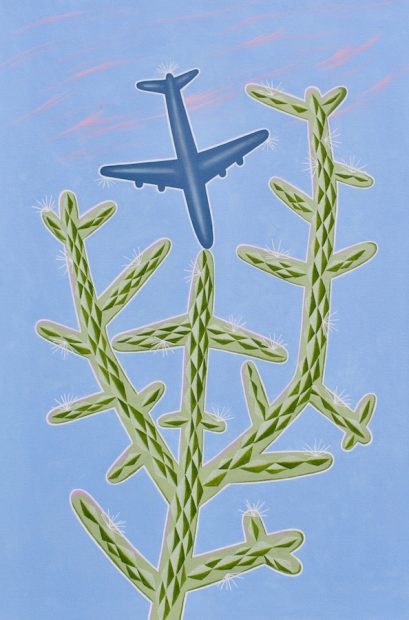 Harrington’s painting Aerocactus is a good example of this intersection, as he marries a modern airplane with the branching arms of a cactus. Sometimes his juxtapositions are selected based on similarities in form, and he’s written about “…the humor and inventiveness of the way things are put together, pointing to the pure ideas behind the resolved work.” 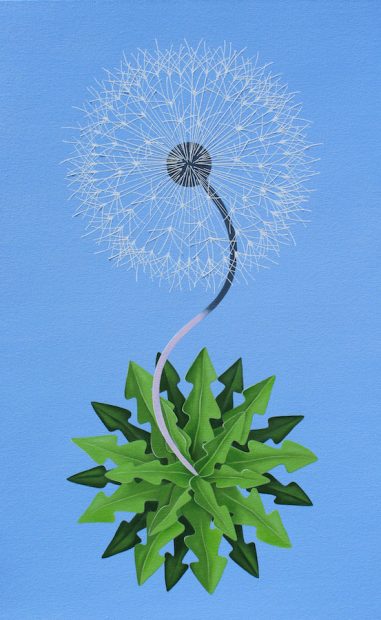 In New World Dandelion, the seed head and the leafy base of the plant are abstracted and simplified to focus on the shared nature of the radial forms. Other plant forms such as cacti, agave, pine trees and pine cones populate the paintings of Harrington, who lives in New Mexico. The forms serve as metaphors for the natural world, and in other works, they’re often combined with the human-built objects and machines. 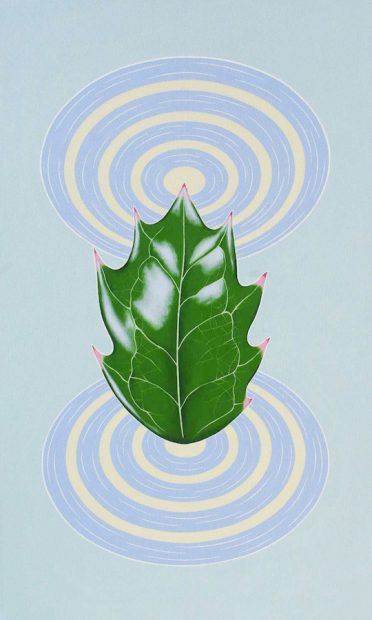 In Harrington’s Apotheosis, the painted sheen of the spiny leaf gives it a tangible, illustrational presence while the more flatly painted circles — a typical contrast in his work—apposes flat abstraction and illusionistic dimensionality. Harrington often combines images of pagodas, temples and churches with symbols such as the foot of the Buddha. Titles also reference ‘baptizing,’ ‘Transmigration,’ and ‘Heaven’ —  religion or spirituality plays a notable role in his visual vocabulary. Harrington writes that he’s spent time living in “…Zen Monastic communities and solitary retreats in the wilderness,” which imbues his work with “…a certain feeling of relatedness to the natural world… .”

Artists who wonder whether anything worthwhile can come of entering yet one more juried exhibition — thereby incurring expense and the inherent risk of rejection — may consider Jeffrey Poole’s experience in last year’s 5th Annual Artspace111 Regional Juried Exhibition, in which he was awarded the top prize by the 2018 juror, Glasstire’s editor Christina Rees. In addition to the cash prize, he was given the opportunity to mount a solo exhibition at Artspace111. Poole writes that this “…really put my practice to the grindstone [to] produce work that I knew would be shown cohesively together as a whole. I also knew it was going to be a proving ground for what I would create and I wanted to put my best foot forward.” 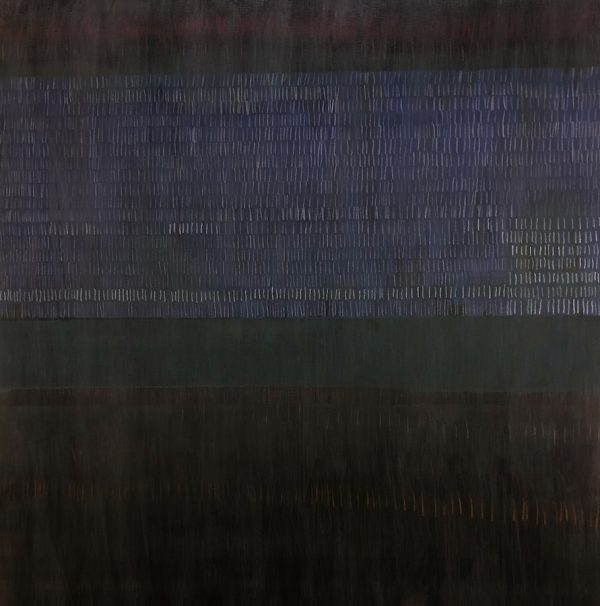 Poole’s 12 mixed-media works on show here are as much about drawing as about painting. Composed of obsessively ordered layers of mark marking, the images emerge through washes of colored pigments. The Fort Worth-based Poole explains his process in an email to me: “Each painting begins as a field of single marks in horizontal rows. I saturate the canvas in the marks, then use a light gesso wash to fade that field down and then repeat the process. The marks are made with combinations of graphite, watercolor pencils, colored pencils, and sometimes ink. …the dominant colors begin to appear and inform me about what the particular painting wants to be. Sometimes the process is repeated only three or four times, other times it can go on for as many as fifteen [times].” The background washes in Red Fence (pictured at top) provide a soft rippling topography, underlying and playing off the linear precision of the marks.

Poole’s As Above So Below has a concentrated wide band of light marks of varying tints, so that the area becomes nearly opaque — a constellation floating over a dark field of color. In the lower half of the canvas, other marks are dimly discerned and veiled from view. Poole explains: “Once the painting has developed a certain spatial vagueness, I will begin to employ some use of colors in the wash along with an interference paint that leaves a slight shimmer on the surface. These interference paints react with light and the colors of the marks underneath them. They also produce an effect in the light that changes as you walk by the painting or look at it from different angles in the room.” 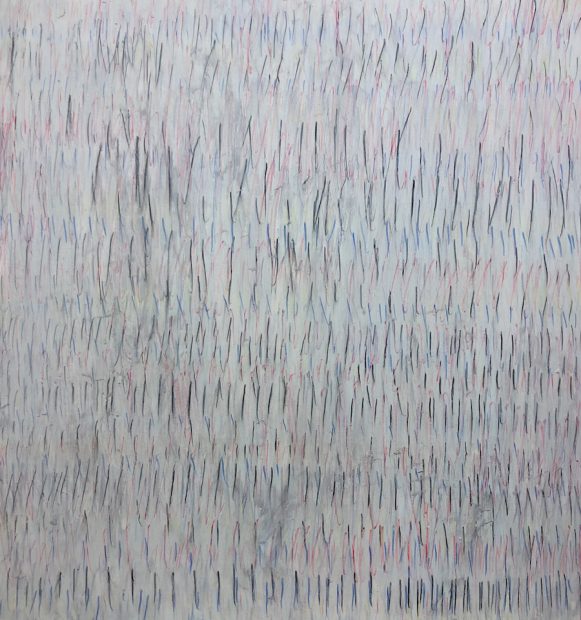 The placement of the marks is more random in Ghost Matter Mind, and the looseness and seeming simplicity of the mark making evokes a comparison to Twombly. Poole: “I choose the single marks, a single glyph, because it speaks to me as the purest form of mark making, prehistoric, almost. It is almost a binary quality with the single marks being the ones and the empty space being the zeroes.” 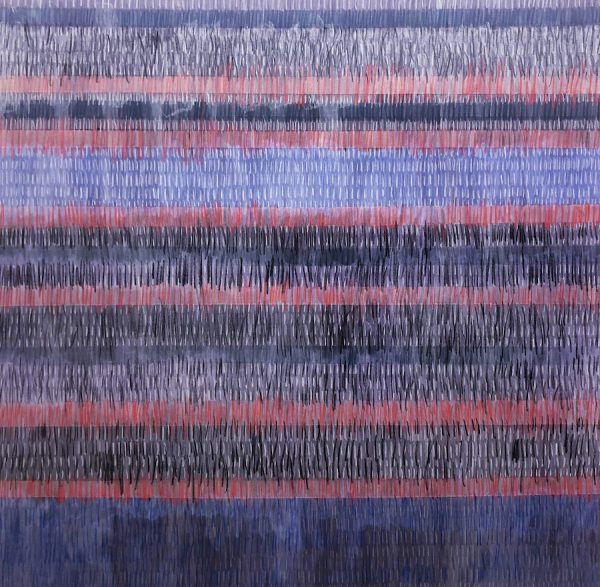 Sometimes the marks coalesce into distinct bands of color, as in Smoke. “I am attempting to create paintings that I hope allow the viewers to ask themselves what they are really looking at… from a distance the paintings can look like whole color fields, but upon a closer look the viewer finds the color fields [are] only there because of the many marks suggesting it. It’s a sum of the whole kind of thing.”