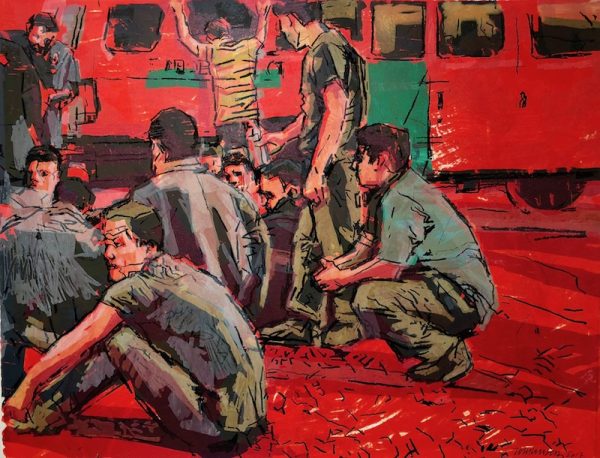 Ron Tomlinson’s silkscreen prints of people detained at the US-Mexico border is the subject of Vecinos, the first exhibition of his work since the Fort Worth artist’s death last September, at age 73. Although the exhibition opened at Fort Worth’s Artspace111 in December, before a threat of funding for a border wall turned into the longest-ever government shutdown, Tomlinson’s prints — depicting those seeking entry and asylum at the border — could easily pass as illustrations for today’s headlines.

I met Tomlinson in the fall of 2008 while photographing him for one of the Fort Worth Weekly’s “Best Of” issues. He was working late with a couple of other artists in his studio on North Henderson Street in Fort Worth, and welcomed me warmly. At the time, the paintings in his studio featured strong and palpable brushstrokes that characterized Tomlinson’s familiar geometric forms, and the works appeared abstract even as figures emerged out of blocks and swatches of paint.

The Skowhegan School graduate and protégé of notables including Philip Pearlstein, Ben Shahn, and John Cage, Tomlinson himself was a mentor to others, including Fort Worth native and fellow artist Sedrick Huckaby, and Tomlinson collaborator Amir Akhavan. It was his collaborative exhibition with Akhavan titled Once We Were Strangers at Gary Lichtenstein Editions in Jersey City in the summer of 2017 that produced the prints for Vecinos. That show also featured some of Tomlinson’s paintings, which sadly aren’t a part of this exhibition. 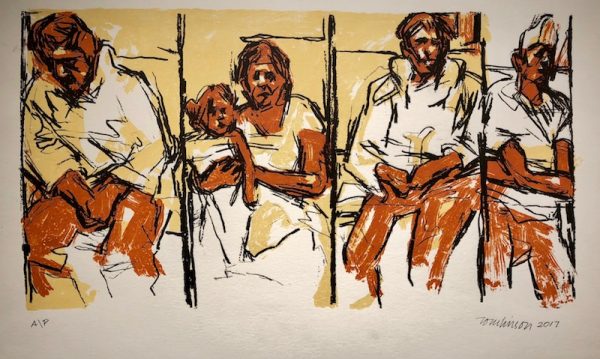 Tomlinson’s prints are slightly off-register, creating a vibrating double image of his subjects. That effect, combined with reds and greens in his silkscreens, present the figures and scenes in a kind of stereoscopic 3D. We’re at eye level with the detained, close enough to see things from their perspective, but also clearly not. Their intense and agonizing gestures, soaked into paper with each layer of ink, makes it difficult to look away, and they reveal a deep record of anguish, fear, and uncertainty — things that have to be experienced to leave such an indelible record on a person, as it does on their faces. 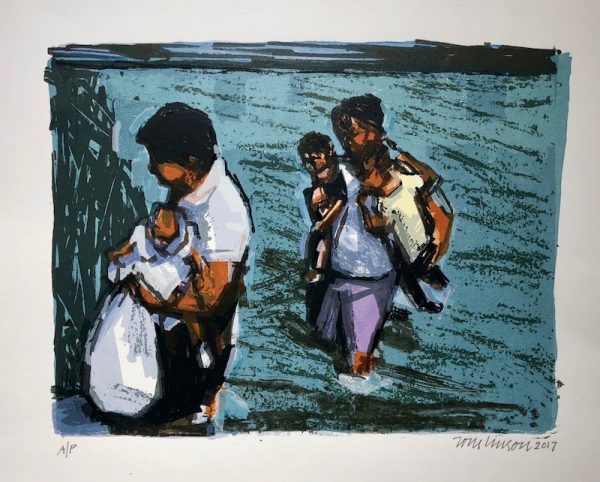 One of works in the show, Mother’s Crossing, is a layered and symbolic composition infused with references to the ecclesiastical. As the figures wade through a knee-deep section of the Rio Grande, we think of Moses being floated down the river to a better life, or the Israelites crossing the Red Sea to safety, and maybe even Saint Christopher carrying the baby Jesus across a river. With this evocative vision of a (holy) family seeking shelter and being turned away, Tomlinson seems to ask if they even need to be this heroic or tragic to gain our compassion.

In his Border Lines variations, the figures are contorted as they sit and lean against walls and each other — grandmothers holding toddlers, men with hands clasped in gestures of pensive hopefulness — all contemplating an unknown fate in the purgatory of an unknown paradise, just outside the waiting area. The multiple perspectives from which Tomlinson captures the detained skip between waiting rooms, bus terminal parking lots, and riverbeds. The views change, but the circumstances do not.

But to what end, these images? After all, babies float ashore in the Mediterranean, while news images of capsized boats of men, women, and children from Haiti, Cuba, Syria, and across swaths of Eastern Europe hasn’t garnered more than empathetic nods or the furrowed brows of opinion writers across all media. So what is the value of these prints from an artist like Tomlinson, who made the images as close to our political reality as this? What does it mean, that this body of  work is now part of his legacy? We write about these things and talk about them, and all it seems to produce is a deluge of even more channels to write about and talk about things. 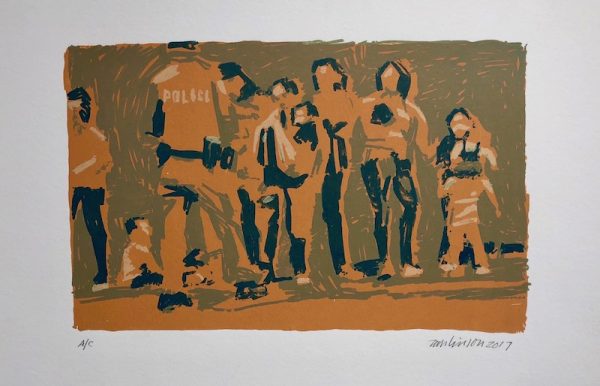 Perhaps the necessity to create this kind of work, for an artist, is to define the role of art in 2019. Finding consensus among artists about the role of art in our current society is like trying to locate a compromise between warring politicians about how to reopen a partially shuttered government. On the one hand, the reason many artists make what they do is because it allows them a ‘break’ from the world we so (often) comfortably occupy — to re-contextualize it in ways that, aesthetically, we can’t anticipate, and their work makes our existence on the big blue marble a little more bearable. More pretty, even. Something you can drink and chat around, versus just buying a $20 poster from Wal-Mart. And then there are artists, on the other hand, who cannot stomach your pretty paintings of horses and portraits of your dog, and would rather eat cadmium yellow paint than participate in an arena of hob-nobbers while the world they live in is burning.

In Vecinos, the works aren’t silent, and they don’t give us a way out. The power of this kind of work is in its impoliteness. The work won’t get over it already, and it doesn’t care that it isn’t staying in its lane. It leaps forward from 2017 and reclaims its time, because this is the art that fits the times. The role of a critic isn’t to tell artists what to make, but to show that the things artists make should be considered in the context of the culture and politics that surround us. Art can’t live outside of context. Yes, you can make really beautiful things that transcend the ugliness of the world around us, because we all need an escape. But the reality of our political moment requires that some of this art energy — I would argue most of it — needs to help all of us get to a place that helps us transcend and see difficult things more clearly.

Tomlinson, a kid from Boston born at the end of World War II, somehow made his way to Texas and set up a home base from which to see the world. In Vecinos he gives us insight into what is possible though art — that by seeing our struggling neighbors as ourselves, we all perhaps get to live with the kind of fullness that this ever-smiling Fort Worth soul managed in his time, as our neighbor.

‘Vecinos: Ron Tomlinson’ is currently on view at Artspace111, Fort Worth, through February 2, 2019.

Beautiful commentary by Christopher Blay. Thank you for sharing your insight and wisdom. And thank you to the Glasstire team for publishing. ‘Vecinos: Ron Tomlinson’ truly provides art for our time and helps me better see my neighbors!