John Biggers, The Contribution of Negro Women in American Life and Education, 1953, Oil on plaster

Restoration has recently been completed on The Contribution of Negro Women in American Life and Education, a mural by artist John Biggers in Houston’s Third Ward. The piece, which is located on a wall inside the Blue Triangle Multi-Cultural Association’s building, was damaged when water from Hurricane Harvey came in through the building’s leaky roof.

The main issue caused by the leaks was the buildup of water in the wood of the building’s walls, which lead to mold forming on, and paint flaking off of, the mural’s surface.

Immediately following the storm, Blue Triangle’s staff sought conservation advice from experts, namely Steve Pine, the head of the Museum of Fine Art, Houston’s conservation department. Although Blue Triangle’s staff successfully used heavy duty dehumidifiers and fans to dry out the damp wood, they didn’t want to begin restoration on the mural until the building’s ceiling could be fixed. (The building’s ceiling has been an ongoing issue, even before Hurricane Harvey.) But ultimately, thanks to donations from the Houston Endowment, the Kinder Foundation, the NEH, and the Texas Historical Commission, along with other private contributions, the needed roof repairs are expected to be completed by the end of January 2019. 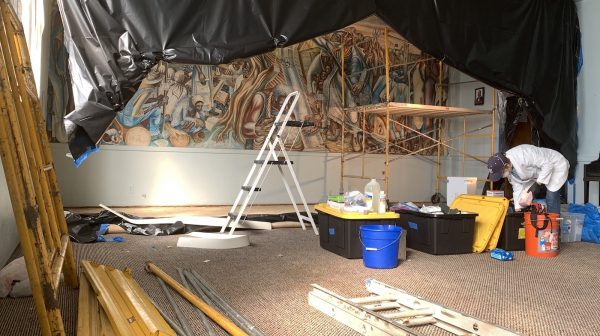 Once ceiling repairs were underway, Blue Triangle knew it was time to look toward the restoration of Biggers’ mural. At the recommendation of the MFAH, the organization hired Fine Art Conservation Laboratories to carry out the job. Over the course of about two weeks, the team — which consisted of chief conservator Scott M. Haskins and mural conservator Julie Stephenson — killed and abated mold on the mural, used archival adhesives to stop the work from flaking further, executed minor in-painting on deteriorated areas of the work, and varnished it for future protection. 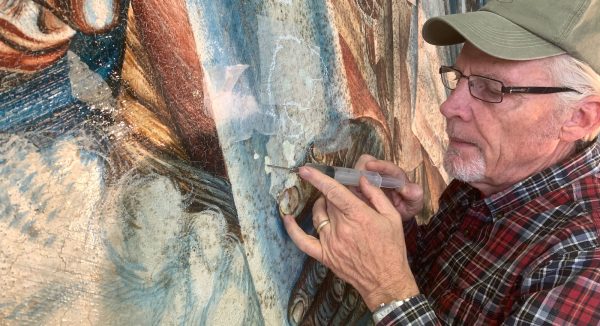