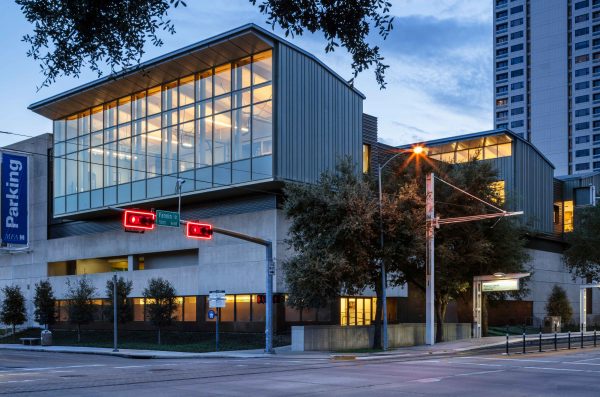 Evening view of the Sarah Campbell Blaffer Foundation Center for Conservation by Lake|Flato Architects at the corner of Binz Street and Fannin Street. Photograph © Richard Barnes

The Museum of Fine Arts, Houston recently opened the Sarah Campbell Blaffer Foundation Center for Conservation, a new development built on top of an existing structure that serves as the museum’s parking garage and visitor center. Designed by the award-winning Texas-based firm, Lake|Flato Architects, the new 39,000-square foot space emphasizes one of the most important materials conservators need to do their job: light. The concept behind the new Center for Conservation’s layout is quite simple — its three main conservation studios (one for paintings, one for sculptures, and one for decorative arts, with an additional fourth space for restoring antique frames), built along the exterior of the building, have windows and/or ceilings that allow light to come into them in a way that’s optimum for each medium (active southern light for sculpture, reflected northern light for decorative arts, and northern light for paintings). 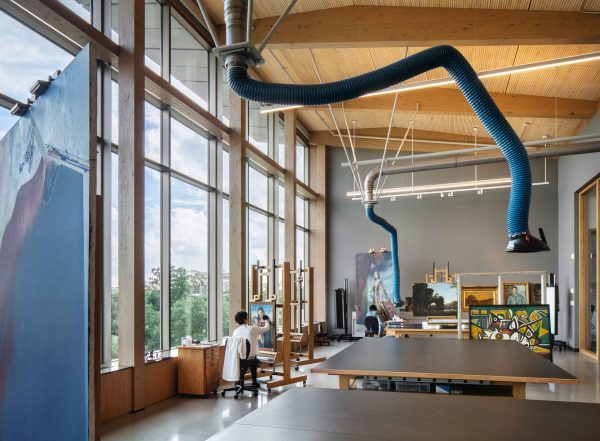 In turn, all of the Center’s spaces that don’t require light, like its machine shop, state-of-the-art spray room, x-ray room, and imaging studio, are along the building’s interior. Additionally, all of the Center’s ductwork and piping was installed below its floor (save for air-filtration vents in each studio), giving each of the building’s sunlit spaces an uninterrupted ceiling and flow of light. David Lake, one of Lake|Flato’s founders, stressed how important these and other ideas were when designing the center, saying “the imperative was light. The design was driven by the concept of light as the organizing gesture, resulting in a central corridor that divides the day-lit studios from the spaces requiring darkness.” 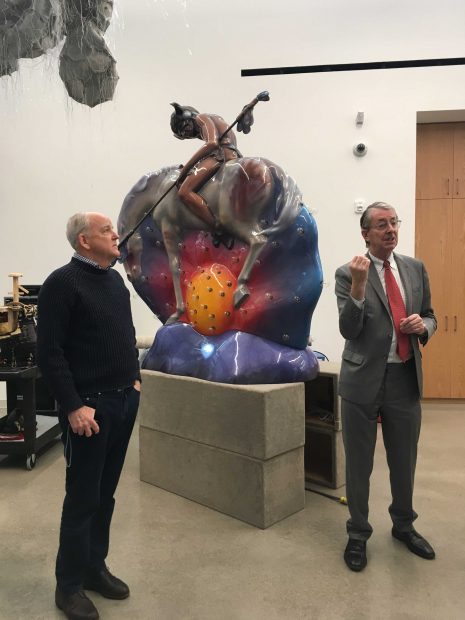 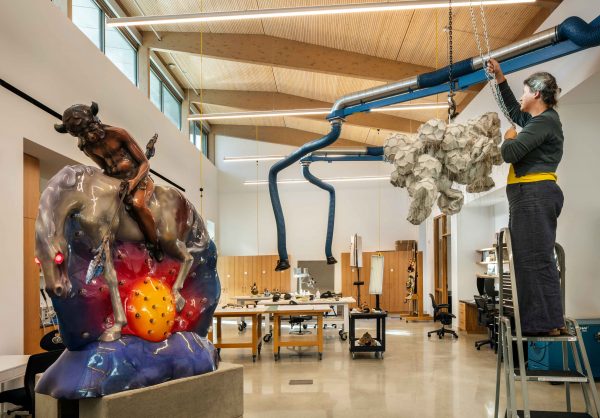 The MFAH’s new Center for Conservation also marks the first time in over a decade that most of the institution’s conservators are under one roof. (The museum’s paper and photography studio, which deals with light-sensitive works, is currently still in its original location in the museum.) Established in 1997, the MFAH’s conservation department has long been divided up into available spaces, meaning that its staff were working not only apart from one another, but also sometimes without the aid of natural light. 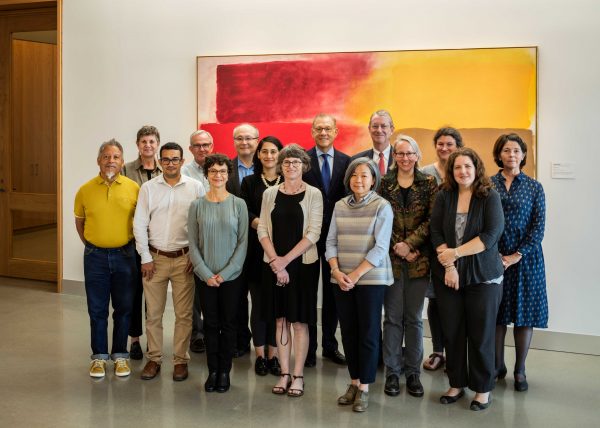 David Bomford, the MFAH’s conservation department chairman, commented that the museum’s new center is a peculiarity in that it is a purpose-built space for conservation, and that it is rare for an institution to have a separate space dedicated solely to the practice of preserving art. All in all, there will be about 20 people working in the center. 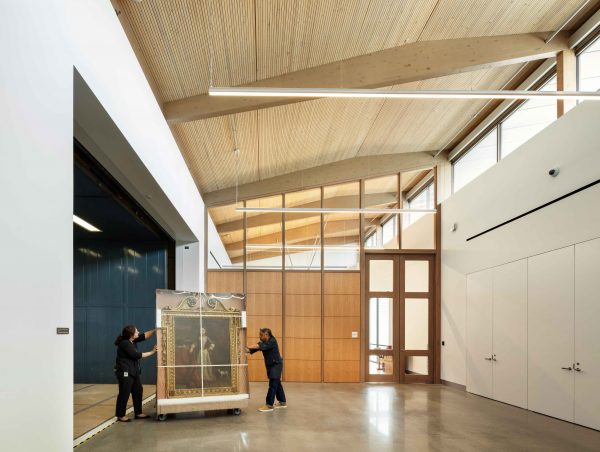 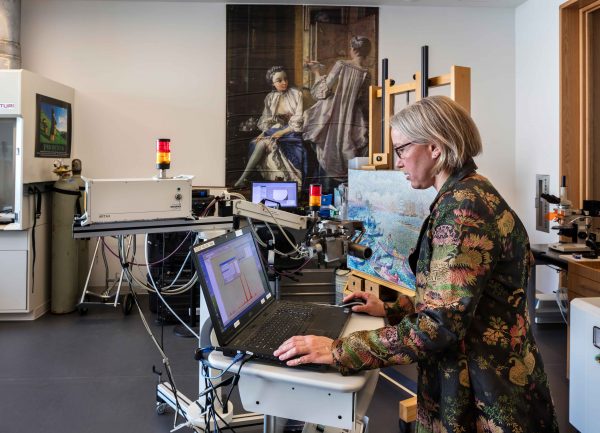 In a separate but related announcement, the MFAH recently received a $750,000 grant from the Andrew W. Mellon Foundation, which renews a conservation research program begun in 2006 that is collaboratively shared between the MFAH, the Menil Collection, Rice University, and more recently, the University of Houston. Overseen by Dr. Bomford and Andrew W. Mellon research scientist Corina Rogge, this program funds research that will partially be conducted in the MFAH’s new conservation science lab. Rebecca Rabinow, the Menil Collection’s director, told Glasstire of the collaboration:

“The core values of the Menil Collection include the central role of research and scholarship, a commitment to the extraordinary care for works of art, and developing and maintaining an international character and presence. Conservation science underlies and enhances each of these values. Our conservation and curatorial departments have benefitted invaluably from the presence of Andrew W. Mellon Research Scientist Dr. Corina Rogge, from publications on the materials of Barnett Newman and participation in international research projects documenting Nigerian bronze alloy compositions to evaluating building materials selected for the new Menil Drawing Institute. We could not be more pleased that the Mellon Foundation has renewed its support for the program administered by the Museum of Fine Arts, Houston which brings together so many Houston-area institutions.” 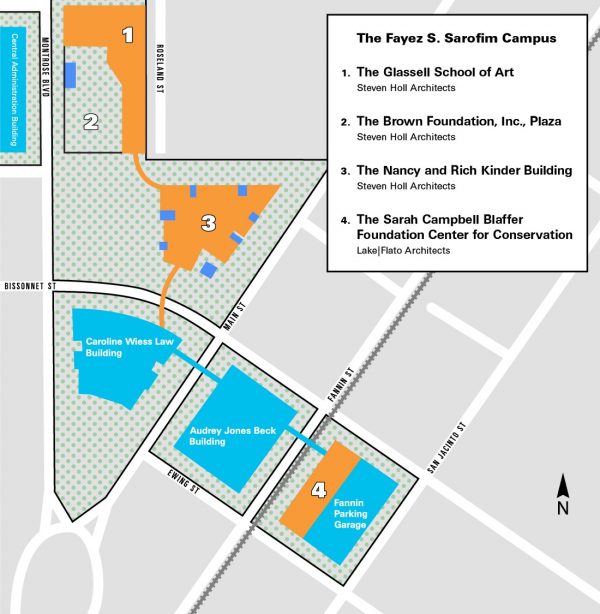 By opening its new Center for Conservation, the MFAH is a step closer to completing its campus redevelopment plan, which is the “largest cultural project currently under way in North America, with some 500,000 square feet in new construction.” Ultimately, once finished in 2020, the project will unify the MFAH’s 14-acre main campus footprint into a network of interconnected buildings.

For more information about conservation at the MFAH, go here