Snoop Around City Hall for a Houston Art History Lesson

Randy Tibbits thinks we should all know a bit more about the rich history of Houston’s art scene. Those who read his Houston Press article, “MFAH and the Menil Are Depriving Us of Local Art,” last April may have also read Devon Britt-Darby’s snappy response in Arts+Culture Texas called “Great and/or Mediocre Houston and/or Texas Art of the Past and/or Present in Houston Museums Now!” Now, there’s a chance to get in on the argument with an exhibition called Houston Founders at City Hall. 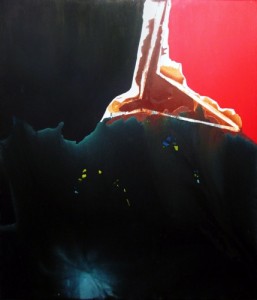 The Mayor’s Office, in conjunction with William Reaves Fine Art, has organized the show of Houston painters from the 1920s through the 1970s (also serving as co-curators were TSU’s Dr. Alvia Wardlaw and the Houston Public Library’s curator Danielle Burns). There’s tons of work by folks like David Adickes, John Biggers, Dorothy Hood, Richard Stout, and Dick Wray. The exhibition runs through October 1 but, since it is installed throughout City Hall’s working spaces, viewing is by appointment only, except during the few scheduled talk and tours.

Tibbits himself will be giving the next talk, called “Houston Artists of the Early Twentieth Century,” this Friday evening at 5pm. For more information on the exhibition and the scheduled events, go here.