Richard Stout Exhibition at AMSET Rescheduled Due to Harvey

The Art Museum of Southeast Texas (AMSET) in Beaumont has announced that its fall exhibition of works by Houston-based and Beaumont-born artist Richard Stout will be postponed a week, to the end of September. Now opening on September 29, from 6:30-8:30 p.m., Sense of Home: The Art of Richard Stout will be on view through December 3, 2017. The opening reception will feature a gallery talk by Stout, and after its run at AMSET, the show will travel to the Art Museum of South Texas in Corpus Christi and the University of Houston – Downtown. To see the Texas A&M University Press’ recently published monograph on Stout, please go here.

During Hurricane Harvey, AMSET’s building suffered damage to its roof and ceiling. The museum also reports that heavy rainfall “allowed water to flood in through the doors” of its lecture hall. Though portions of the museum’s ceiling need to be replaced, AMSET is now open to the public. 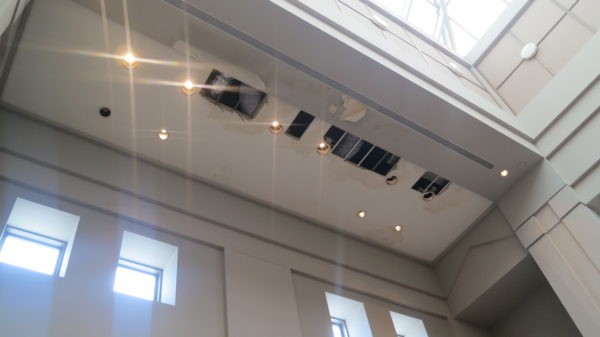 Ceiling damage at the Art Museum of Southeast Texas