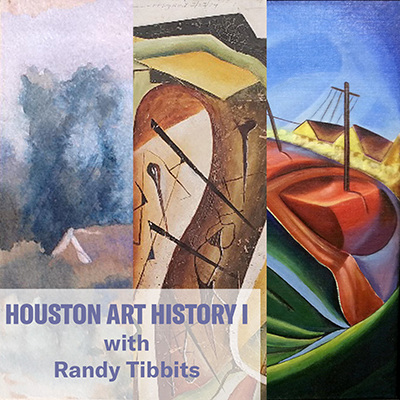 The $185 course ($150 for Art League Houston members) will take place from 6:30-8 PM on Tuesdays beginning January 12 (it runs through Feb. 2), and the instructor fee for the lectures will be donated to both HETAG and the Center for the Advancement and Study of Early Texas Art (CASETA).

Among the topics to be covered are the following (from the course description):

…the germinal phase, focusing on the early career of  Emma Richardson Cherry, Houston’s first modern artist; the establishment of arts institutions, including early art training at Rice Institute, the founding of the Museum of Fine Arts Houston, Art League Houston and the Contemporary Arts Museum; the coming of Modernism to Houston, with particular emphasis on the queer-inflected “eccentric” modernism of the so-called Cherry-McNeill Group of young avant-garde Houston artists in the 1930s/40s; and the burgeoning of art in the rapidly growing Houston of the post-war 1940s and 1950s.

The reading list which can be found here, includes books about Emma Richardson Cherry, Texas Impressionism, and a book of essays about Houston Artist Cooperatives in the 1930s, among others.

Writes HETAG’s Tibbits in an email to Glasstire: “For over 20 years, I’ve been researching the art of Houston — that is, the art made here, rather than the art that has been bought & brought here from elsewhere. Our city has a rich art history of which few are aware. We don’t have a lot of opportunities to see and learn about it, and so I’m thrilled that Art League Houston is offering this series of talks through which I can share images of the fabulous Houston-made works I’ve been lucky to see over these years.”

For more and to sign up, please go here.

Randy Tibbits is an independent art curator and researcher, focusing on the art of Houston in the early 20th Century. He has written on the subject and has curated or co-curated a number of exhibitions including, Rice Institute and the Visual Arts in Houston, 1900-1960 (Fondren Library, Rice University, 2004); Houston Art in Houston Collections: Works from 1900 to 1965 (Heritage Society Museum, 2005); Emma Richardson Cherry: Houston’s First Modern Artist (Ideson Gallery, Houston Public Library, 2013), and others. He is the founding coordinator of HETAG: Houston Earlier Texas Art Group; served for many years on the Board of CASETA: Center for the Advancement and Study of Early Texas Art; and has been a contributing art reviewer for Houston Press and other publications.

CASETA and Tyler Museum of Art Present the...

Registration has Opened for CASETA’s Annual Symposium and...

“Why The Hell Not?” CASETA Enlivens Early Texas...