Artist Relocates the Beatles to Express His Love for Houston 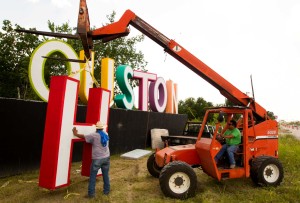 Artist David Adickes has spent the past few days with a crew installing his latest work, a multi-colored sculpture that spells out “We (heart shape) Houston.” It does not seem to be inspired by the recently launched “Houston is Inspired” campaign, which produced the Market Square Park mural painted by graffiti artist Gonzo247 a couple months ago, but instead by a personal affection for the artist’s adopted hometown.

Perhaps best known for his gigantic heads of U.S. presidents, the 67-foot tall Sam Houston statue on I-45 near Huntsville, or his cellist sculpture at the Houston’s Lyric Center, Adickes has relocated his 36-foot tall sculpture of the Beatles that stood in the spot (facing I-10 just west of downtown) for the past six years to his Nance Street studio in order to make way for the concrete love note.

A formal dedication with Mayor Annise Parker and other dignitaries is scheduled for July 12, according to the Houston Chronicle. “I think it’s going to have an interesting, welcoming approach into the downtown area,” said Minnette Boesel, the mayor’s assistant for cultural affairs, adding, “It’s on his property. The city does not own the statue or own the property.”

Houston: Maybe It’s Not Worth It After All